The Drax 29 hijacked a train on the way to a coal-fired power station, an action of civil disobedience to highlight an environmental crime. 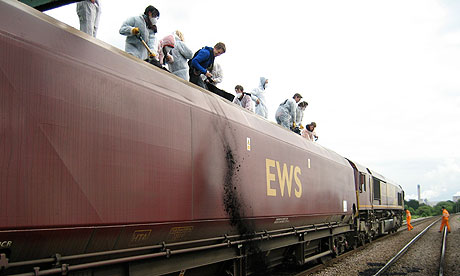 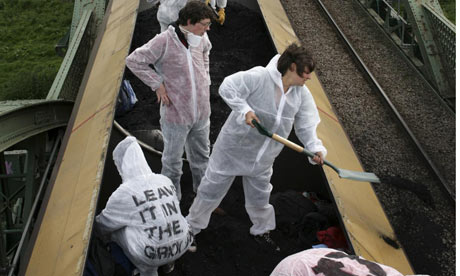 coal offloaded on the tracks by Drax 29 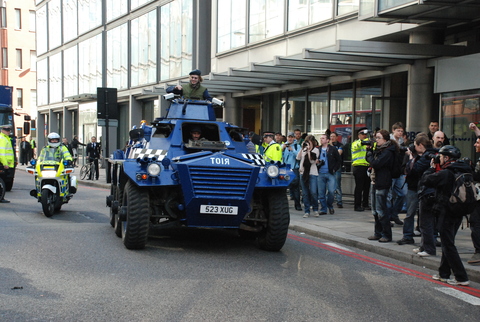 'Civil disobedience - the deliberate violation of a law for a social purpose. To violate a law for individual gain, for a private purpose, is an ordinary criminal act; it is not civil disobedience.' -- Howard Zinn

'Must the citizen ever for a moment, or in the least degree, resign his conscience to the legislator? Why has every man a conscience, then? ... It is not desirable to cultivate a respect for the law, as so much for the right. The only obligation which I have a right to assume is to do at any time what I think right.' -- Henry David Thoreau

'The prosecution have not challenged the facts we presented to you on oath about the consequences of burning coal at Drax: 180 human lives lost every year, species lost forever. There is a direct, unequivocal, proven link between the emissions of carbon dioxide at this power station and the appalling consequences of climate change.' -- Drax defendant Jonathan Stevenson

In one of those quirks of fate, some would call it synchronicity, the Drax 29, having been found guilty in July, were sentenced as the Climate Camp at Blackheath drew to a close.

The Drax 29 had hijacked a train on its way to the Drax coal-fired power station in Yorkshire, one of the largest in Yorkshire, and shovelled the coal onto the tracks. Whilst admitting that an offence had been committed, the Drax 29 argued that they were acting to stop a larger crime of climate change, an act of civil disobedience.

Civil disobedience, direct action, has a long and honourable tradition dating from Henry David Thoreau, his essay 'Civil Disobedience' and his refusal to pay taxes to support the American land-grabbing war against Mexico. We could go back much further, the act of Jesus Christ kicking over the tables of the money changers in the temple must be one of the first recorded examples of direct action.

It was time for the annual Passover celebration, and Jesus went to Jerusalem. In the Temple area he saw merchants selling cattle, sheep, and doves for sacrifices; and he saw money changers behind their counters. Jesus made a whip from some ropes and chased them all out of the Temple. He drove out the sheep and oxen, scattered the money changers' coins over the floor, and turned over their tables.

As veteran British politician Tony Benn has long argued, it is direct action that forces political change. Those with power do not give it up willingly. Would women have got the vote had not suffragettes chained themselves to railings?

Were it not so, the blind obedience to authority, lies the road to fascism.

The intellectually arguments on the causes of climate change are over, each passing day brings more evidence that supports the position that not only is climate change happening, but the process is accelerating.

The Sermilik fjord in Greenland: a chilling view of a warming world

Meanwhile despite the hot air from politicians, they fiddle whilst the planet burns, it is business as usual. At best well-meaning fools carrying out insignificant actions.

Farnborough Airport is a business airport, with an obscene passenger payload that is on average 2.5 passengers per flight. The airport operators TAG Aviation have recently applied to double their existing flights. Farnborough is not the only airport seeking massive expansion.

A coal-fired power station is planned for Kingsnorth in Kent, scene of police violence at last year's climate camp.

BP has announced discovery of a giant oil field in the deep waters of the Gulf of Mexico. The go-ahead has been given for the tar sands in Canada.

The Drax 29 carried out an act of civil disobedience, they stopped a coal train on its way to the Drax coal-fired power station.

As George Monbiot wrote in the Grauniad:

'They have given up their time and risked imprisonment to show us where responsibility for the climate crisis lies. They will probably have to perform community service, and carry legal and compensation costs running into many tens of thousands of pounds. Actions like theirs – they stopped a train carrying coal to the Drax power station in North Yorkshire – make a difference not through any physical disruption they might cause but by shining a light on an issue we otherwise choose to ignore.'

'Scientists and journalists can bang on about the climate crash until everyone has died of boredom, but we always struggle to fire people up. The threat seems too remote, too abstract to raise most people's blood pressure. But direct action does three things. It forces the media to take an interest, by providing the drama that scientific reports can't convey. It brings scientific abstractions home to people, reminding us that the electricity we take for granted is produced at a cost that others must pay. Perhaps most importantly, it shows that the campaigners aren't kidding.'

The defenders argued in court the defence of necessity, they may have committed a crime in stopping a train, but they did so to prevent a greater crime, that of climate change.

If I put a brick through a car window, I am committing a crime, on the other hand if it is the getaway car for a gang of bank robbers, I am doing so to prevent a greater crime.

The six Greenpeace campaigners who painted the chimney of the coal-burning power station at Kingsnorth in Kent last year were acquitted on lawful excuse.

The judge refused to allow this defence, though he did permit evidence to be submitted on climate change, but refused to allow James Hansen, head of Nasa's Goddard Institute for Space Studies, to appear as an expert witness.

James Hansen himself was arrested for his part in a protest over mountaintop coal mining in West Virginia. He has previously said that direct action is necessary because the democratic process is not bringing about policy change fast enough.

Contrary to popular belief, a jury can ignore a judge, and that formed part of the defence summing up by one of the defendants. As we can see from the learned opinion of Lord Denning:

"This principle was established as long ago as 1670 in a celebrated case of the Quakers, William Penn and William Mead. All that they had done was to preach in London on a Sunday afternoon. They were charged with causing an unlawful and tumultuous assembly there. The judge directed the jury to find the Quakers guilty, but they refused. The Jury said Penn was guilty of preaching, but not of unlawful assembly. The Judge refused to accept this verdict. He threatened them with all sorts of pains and punishments. He kept them 'all night without meat, drink, fire, or other accommodation: they had not so much as a chamber pot, though desired'. They still refused to find the Quakers guilty of an unlawful assembly. He kept them another night and still they refused. He then commanded each to answer to his name and give his verdict separately. Each gave his verdict 'Not Guilty'. For this the judge fined them 40 marks apiece and cast them into prison until it was paid. One of them Edward Bushell, thereupon brought his (case) before the Court of the King's Bench. It was there held that no judge had any right to imprison a juryman for finding against his direction on a point of law; for the judge could never direct what the law was without knowing the facts, and of the facts the jury were the sole judge. The jury were thereupon set free."

This was affirmed as recently as 2005, in relation to the case of Wang, where a committee of Law Lords in the highest court in the land, the House of Lords, concluded that: "there are no circumstances in which a judge is entitled to direct a jury to return a verdict of guilty". So you do have that right to decide for yourselves. And unlike in 1670, his honour won't be able to fine you, or put you in prison for making what he sees as the wrong decision.

There have been many cases over the years where juries have decided, on reflecting more broadly, to find people not guilty despite directions from the judge. For example, the case of Zelter and others who were accused of damage to an aircraft about to be used for bombing civilians. In all of these and others the judge said that the defendants admitted the offence and so must be found guilty. But the jury chose to look outside the limited view of the court room, and to find them not guilty.

The jury though decided to ignore the defence and delivered a guilty verdict in July, the sentences handed down by the judge were a mix of conditional discharge, costs and compensation and the maximum sentence 60 hours of community service.

The reaction of the authorities to direct action is mixed and variable. They face a dilemma. Direct action is far more widespread than the authorities would like to admit. Put defendants in court and you give them a platform, you run the risk of more action to follow. You also run the risk that the prosecution will fail as juries are reluctant to convict as with the Kingsnorth 6 who were acquitted, or if the prosecution is successful all the defendant receive is a mild slap on the wrist as with the Drax 29.

Sometimes the reaction of the authorities is perverse as with the ludicrous decision to prosecute the Space Hijackers at G20 this spring for impersonating police officers. If the authorities in Spain were to follow the same perverse logic, Spanish gaols would be full of carnival goers!

The action of the police at Kingsnorth last year and G20 this year has passed into the annals of infamy for police violence and brutality. The response of the police to Climate Camp on Blackheath Common could not have been more laid back, though they did engage in information gathering, which could be seen as intimidation and harassment.

The reaction of the mainstream media to Climate Camp was on the whole supportive, with support coming from papers that traditionally would have been hostile, Times, Telegraph, Mail, with the Mail in its Life section describing the Climate Camp as an awfully nice place to spend the weekend!

The Blackheath Bugle was very positive of Climate Camp, as were local people, which only served to make Mayor Bullock look a complete tosser when he compared those at Climate Camp with football hooligans.

The next big test will be a climate swoop on Ratcliffe-on-Soar power station 17 and 18 of October 2009.