The Climate Rush 'suffragettes' continued their tour of Southern England on Saturday 5 September with another day of events around Sipson, one of several villages threatened with destruction by plans to build a Third runway at London's Heathrow airport. The day included activists from around the country in a 'Celebration of Community Resistance.' Photos Copyright (C) 2009 Peter Marshall, all rights reserved. 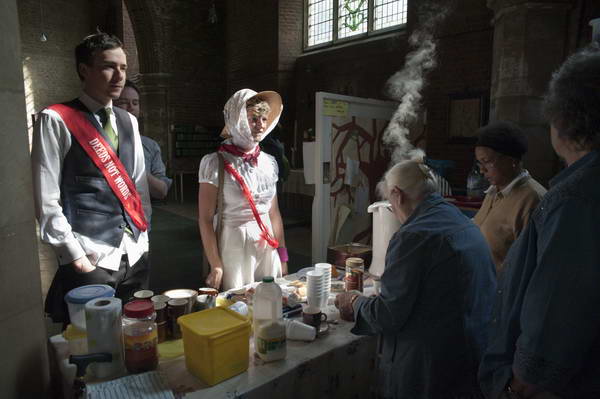 Coffee in church before the walk 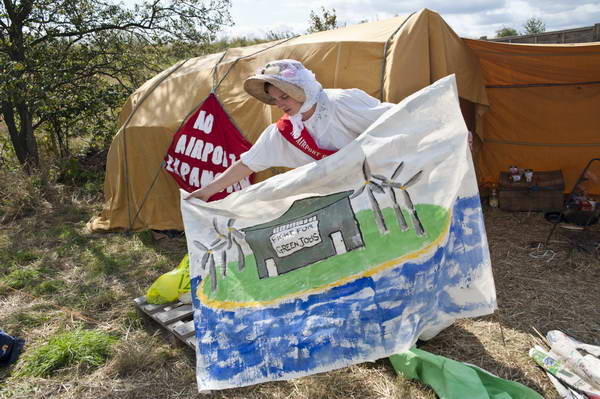 Getting ready for the Celebration 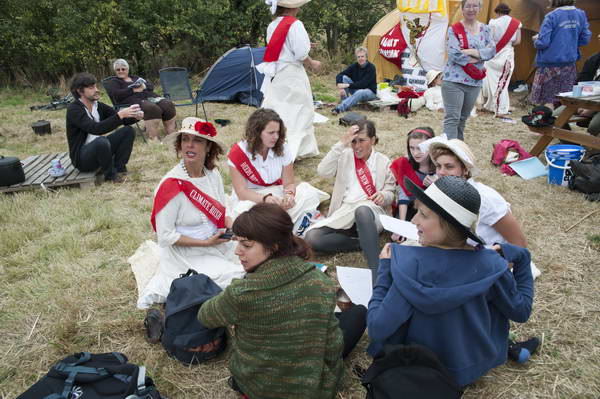 Working on the Song 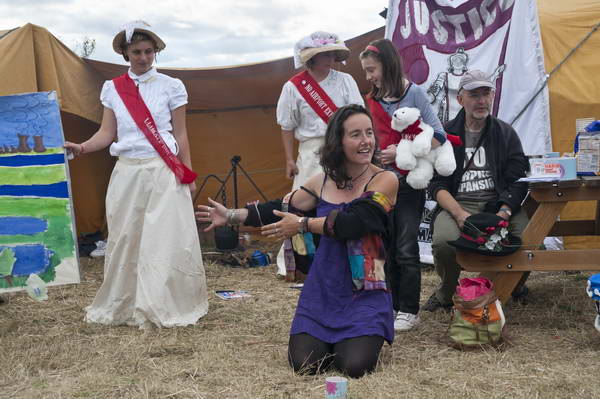 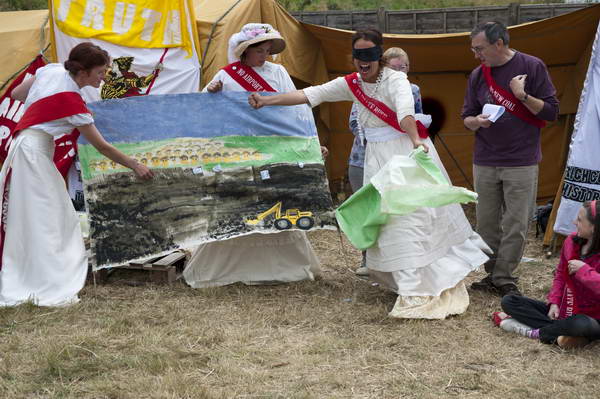 Merthyr Common under Attack by Argent 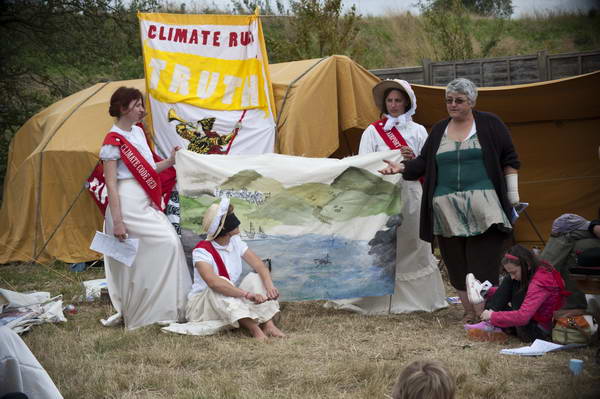 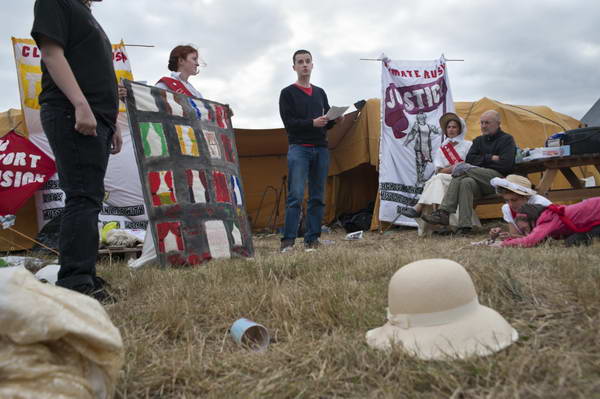 A message from Cathy McCormack (read by a colleague) 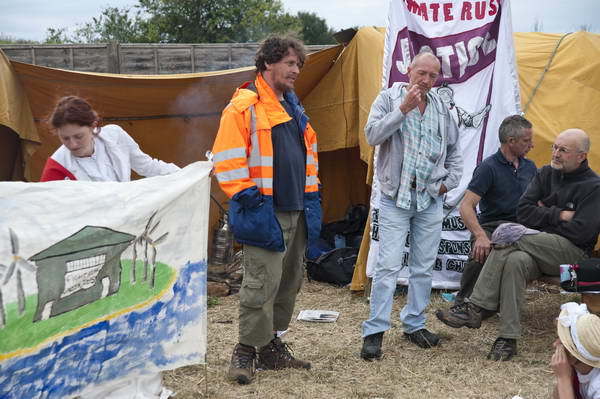 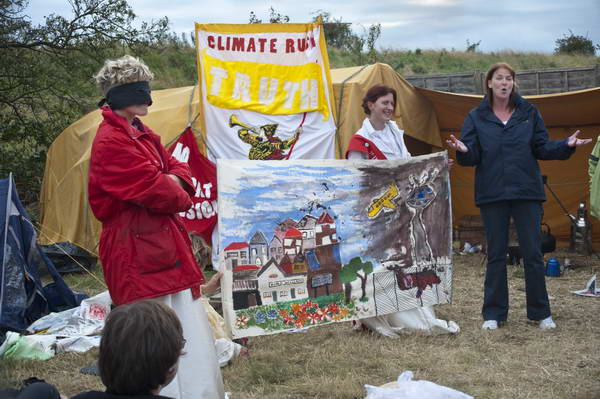 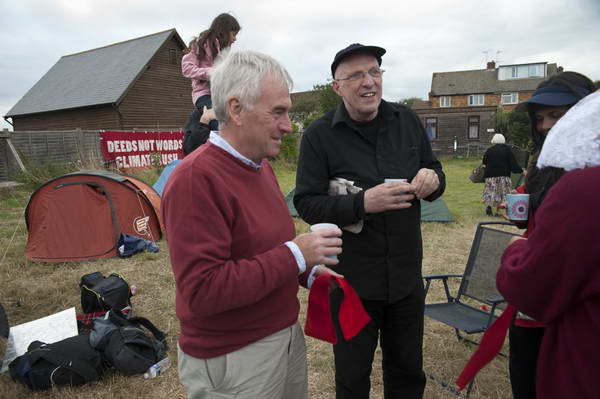 everal climate activists, including Tamsin Omond wearing her long white 'suffragette' dress, frilly blouse and straw hat and veil, took the short train ride to Hayes for a service in St Anselm's Church at the start of a walk by the London Churches Environmental Network, which called in later at the Climate Rush camp on the Greenpeace Heathrow Airplot at Sipson.

There the other Climate Rushers were preparing for the afternoon's 'Celebration of Community Resistance' in which activists from around the country came to give short presentations on their campaigns. The presentations were interactive, with a volunteer representing the 'climate villains' involved, visual backdrops for each campaign and a song with a verse for each protest written during the morning by the Climate Rushers.

We heard first hand accounts of the battle to save the remaining Radley Lakes from dumping of pulverized ash from Didcot power station, the campaign against the opencast mining only a few yards from housing on Merthyr Common at Merthyr Tydfil (renamed Fos-y-Fran by the mining company, the opposition in County Mayo to the high pressure gas pipeline at Rossport, The IMF/World Bank's forcing the privatisation of water supplies around the world. Two ex-workers from Vestas talked about their fight to preserve green jobs and finally Geraldine from NoTRAG talked about the campaign against the third runway at Heathrow - and Tamsin Omond amused us all in a rather active role as the villain.

What was common to many of these accounts was the evidence of corruption and illegal activities by the companies and governments involved attempting to maximise profit at the expense of the planet. With a few exceptions, the mainstream press has failed to investigate or expose scandals and in some cases is owned or controlled by those who have a financial interest or rely on advertising income from companies that are exploiting the planet.

Among those in the audience, together with local residents were the local MP, John McDonnell and climate activist and transport campaigner John Stewart, Chair of HACAN ClearSkies.

What complete and utter waste of time, absolutely madness... nothing more than a purpose built platform for the self-righteous, mouthing off to the already converted, so sad... no one else is stupid or naive enough to take the time to listen, absolutely pathetic, boring and complete super heated hogwash as usual!

OFF THE RICH NO LEADERS

Tamsin Omond... who the ? is she. Well google came in handy for that. Yet another privileged upperclass type who`s familly owns loads of stolen land.
Sick to bits of seeing this person, true you cant help where you been born but might be good if she asked Baronet Grand-papa to give the fucking land back.

Stop playing the media game, one Swampy was enough

all action is good, fluffy or not.

Oh god, it's still happening. We (climate activists) are spending time & energy in slagging each other off. And governments and corporations are looking at us laughing their balls off while the planet burns.

I've got concerns about Climate Rush, but AR says, all action is good action.

See Camper and Animal libber on ...

The 'suffragettes' would have been made very welcome had they detoured to Farnborough.

TAG Aviation having only recently got planning consent for a doubling of weekend and bank holiday flights, has now applied to double its existing movements at Farnborough Airport.

What a lot of childish purile comments.

They are out doing something, highlighting a real issue.

Climate Rush on the Run

So nice to see a camp site that doesn't have dozens

So nice to see a hippy camp site that doesn't have dozens of plastic carrier bags filled with skip meat lying about, tent looks a bit grubby though and the drawings look like they were painted by a 5 year old, I am right?