Expansion of Farnborough Airport will lead to increased CO2 emissions at a time when we need deep cuts. 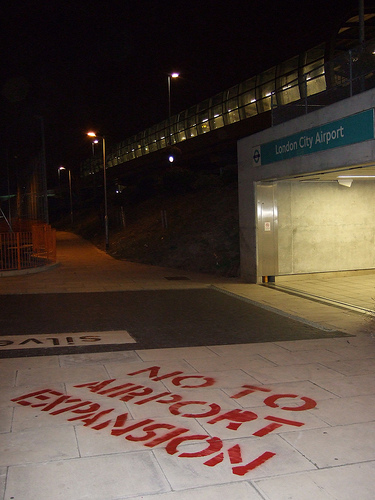 'That so many of us are here today is a recognition that the threat from climate change is serious, it is urgent, and it is growing. Our generation's response to this challenge will be judged by history, for if we fail to meet it — boldly, swiftly, and together — we risk consigning future generations to an irreversible catastrophe. No nation, however large or small, wealthy or poor, can escape the impact of climate change. Rising sea levels threaten every coastline. More powerful storms and floods threaten every continent. More frequent droughts and crop failures breed hunger and conflict in places where hunger and conflict already thrive.' -- President Barack Obama, address to UN, September 2009

TAG Aviation, owners and operators of Farnborough Airport, have sought planning permission to double the number of their existing flights.

There are many reasons to object to the expansion of Farnborough Airport - noise, air pollution, risk - and these have been well documented by myself and others.

There is one overriding reason, increase in CO2 emissions.

There is some controversy as to by how much CO2 emissions will increase were Farnborough Airport to expand. Nearly two million tonnes of CO2, 241,153 tonnes of carbon dioxide? It is an irrelevance and thus a red herring. The only point to note is that there will be an increase.

That TAG Aviation got their figures so wrong on CO2 emissions, shows that their other figures cannot be trusted. Who now believes their false claims that there will be no increase in risk, that only a handful of local residents are effected by noise, or their ludicrous job creation figures that has turned them into laughing stock?

Aviation is the fastest growing source of greenhouse emissions. These emissions are in the upper atmosphere where they have three times the impact than if they were emitted at ground level.

Time is not on our side.

In a recent address in China, Lord Stern said the situation is now more dire than the Stern Report indicated in 2006, and the ability of the planet to cope is less than was thought then, the effects of climate are also more rapid!

Tuesday 15 September 2009, Farnborough was the wettest place in the country. 45mm of rain fell in six hours! Cove Brook burst its banks and caused local flooding. Not the first time it has done this in recent years.

The problem is not, as one dumb local councillor suggested, caused by weeds in the brook, weeds that provide a valuable habitat and slow the flow of water through the brook. Nor would the problem be solved by canalising the brook, as this would simply destroy the brook as a wildlife habitat and cause flooding downstream.

The problem is caused by increased rainfall, combined with the deforestation of the surrounding catchment area and increased drainage on the airport. This was all forecast in objections to the creation of a business airport at Farnborough. Factors which were conveniently overlooked when councillors rubber-stamped the original planning application. Councillors which included the same dumb councillor who appears not to understand why Cove Brook floods.

At the time, households bordering the brook were warned that they would experience increased risk of flooding in the future.

The climate talks in December in Copenhagen (COP15) are meeting to consider how to halt global temperature rises to two degrees centigrade. This figure is already dated. The Arctic Ice cap will melt with a one degree rise. Recent Met Office research suggest we may not be able to hold to a 4C increase at present rate of emissions and will face climate catastrophe within 50 years, five decades sooner than previously thought.

The Arctic is expected to be ice free in the summertime sometime between 2011 and 2015, that is 80 years ahead of what was predicted only a few years ago! White ice reflects heat, dark sea absorbs heat. Release of methane accelerates the process. As the oceans warm they change from a carbon sink to a carbon source. Warmer oceans cause sea levels to rise as warm water expands.

A 17 metre rise in sea level would wipe out all our coastal cities, including London.

Ancient glaciers are disappearing faster than ever. Ice loss from many glaciers in the Arctic and Antarctic is greater than the rate of snowfall further inland.

Historically CO2 concentrations in the atmosphere were at the level of 275 ppm. They are now at 390 ppm and rising by 2 ppm per year. To hold global temperature rises to less than two degrees centigrade, the atmospheric concentration of CO2 has to be brought back down to below 350 ppm.

Already there has been a number of direct actions, and these actions will grow as public anger grows.

At the weekend, 1500 people attempted to shut down a coal-fired power station in Denmark.

17-18 October 2009, an attempt will be made to shut down Ratcliffe-on-Soar coal-fired power station.

Flooding of Cove Brook was nothing compared with the flooding and droughts that are now occurring with increased severity and frequency in the Third World.

In the Philippines, a month's rain has fallen in 12 hours causing widespread flooding. The worst flooding in four decades.

A UN report predicts the Ganges will have dried up by 2030. 500 million Indians are dependent on the Ganges, both spiritually and physically. The Gangotri glacier lies at the head of the Ganges and feeds it with water. To Indians it is a Holy Place, and they will carry the Holy Water home in brass containers. Over the past thirty-five years, the glacier has retreated up the valley at a faster and faster rate. It is not only Gangotri, some seven thousand Himalayan glaciers are shrinking year by year.

Precipitation falls on the Himalayas as snow. The water is slowly released as meltwater in the spring. No snow – flash floods in the winter, droughts in the summer.

In Ethiopia and Kenya droughts are now an annual event not a once every decade event as in the recent past. Nomads can cope with droughts once every ten day years, they cannot cope with annual droughts.

During the 1980s, it was direct action that forced an end to the road building programme. It was no longer profitable for construction companies to continue.

TAG Aviation are not expanding Farnborough Airport for the benefit of the local community. They are driven by corporate greed. How many shut downs before their business customers go elsewhere?

Lewisham council recently commended Climate Camp Blackheath for their highly professional, efficient and responsible level of organisation of all aspects of the camp, including hygiene, catering, security, waste, recycling and medical support. Lewisham Council went on to say "believes the camp set an excellent example of consensual decision-making and low-impact living". I wonder were they also impressed by the training for future direct action?

Either the government is serious on cuts in CO2 emissions or they are not. If they are serious, then they have to call a halt to further airport expansion.

The Climate Act makes mandatory cuts in CO2 emissions of 80% by 2050. So far we have seen no attempts to meet this mandatory target.

To meet their obligations under the the Climate Act the local planning authority has no choice than to reject expansion of Farnborough Airport. Should they fail to reject the planning application they will face a legal challenge. Councillors could be surcharged for the cost of that challenge.

We are staring into the abyss.