No Borders activists staged a protest on 6th October at a Arora hotel near Heathrow in protest at the company's plan to convert one of its Gatwick hotels into an immigration prison. Management of the Arora International Hotels have applied for a change of use, which would see the hotel rooms converted into 245 cells, which would supplement the existing 551 places at nearby Brook House and Tinsley House.

On the same day, a number of migrants in the UK and France were in fear of deportation to Afghanistan on a joint charter flight. The anticipated flight was, however, cancelled, although there may be flights planned for the future.

The co-operation between the British and French states is carried over from the destruction of the 'Jungle' in Calais on 22nd September, which initially appeared to have been a media stunt, as many of the migrants removed from the camp have found their way back to Calais, with no possessions and nowhere to go, whilst some of the other camps in the area remained untouched by the brutal police operation that was publicly launched by the French State, and applauded by British politicians such as Home Secretary Alan Johnson. On Wednesday 10th October, the operation resumed with an attack on the Dock Camps. The highly visible harbourside squat inhabited by Palestinians, Egytians, Eritreans and Somalians was destroyed by 20 odd vanloads of CRS. Around 30 arrests were made.Many of those arrested have been released and are sleeping rough, facing continued police harassment. Activists on the ground are appealing for support so that the attacks can be resisted. 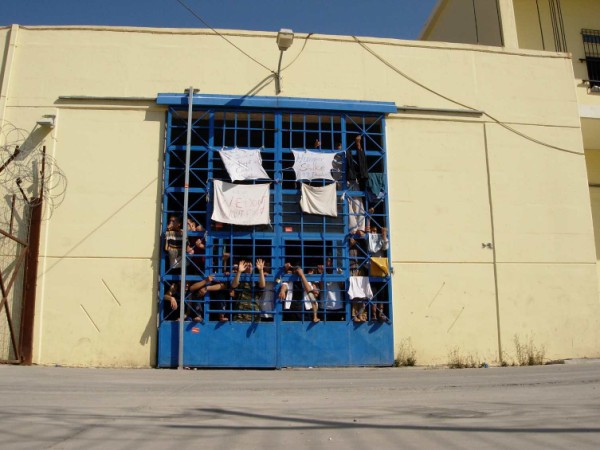 At 7.30am on 22nd September, 500 poice swooped on the Calais 'Jungle' bulldozing tents and seizing the migrants. No Border activists at the camp attempted to protect a group of migrants by using a length of rope to form a human shield around the group. The police cut the rope and rushed in, knocking the activists and migrants to the ground, resulting in the dramatic footage that graced the national press.

According to Schnews: "Although some have been sent as far away as Toulouse, a third of the migrants have already been returned to the streets of Calais. They now have no possessions, nothing to eat and nowhere to stay. No Borders activists are remaining in the area, with one saying, "We’re busy trying to help people rebuild the camps - we’ve brought loads of tents and tarps over from the UK.".

Earlier in the Summer, Calais saw activists staging a No Border Camp. Lesvos, Greece, was also the site of a No Border camp, which focused on conditions at the Pagani detention centre.

Like Calais, Lesvos, a Greek island 10km off the coast of Turkey, is a frontier of Europe. Migrants coming from Afghanistan, Iran, Somalia, and other countries often find themselves on the island of Lesvos mistakenly thinking they have reached Athens. They come packed on small boats and are frequently shot at, rammed, or have their boats sunk by private paramilitary border police Frontex.