Around fifty people protested on 14th October against the deportation of more than forty people to Baghdad. The demonstration was called to stop the first mass deportation flight to Baghdad, and demanded that "the first mass deportation flight to southern Iraq, expected to leave on Wednesday, is suspended and the detainees threatened with forcible removal are released immediately." Activists from International Federation of Iraqi refugees and Stop Deportation Network spoke and called for an end to all deportations to Iraq and to free the detainees. Also on 14th October an early day motion was tabled by 4 MPs in the House of Commons which "calls for the deportation of Iraqi refugees to Iraq to be halted and for the Iraqi detainees threatened with forcible removal to be released immediately". Despite this the first deportation to Baghdad took place, 39 people were flown out early on Thursday the 15th October on a specially chartered plane provided by Air Italy. Sadly UKBA were able to deport the first ten people to Baghdad. The other detainees were not accepted by the Iraqi government and were flown back to detention in the UK. Update: the returned Iraqi detainees have announced a hunger strike from 19th October 2009 and have said that they and will strike until they are released. In addition a French / UK deportation flight to Afghanistan was due to leave Lille-Lesquin on the 20th October but was cancelled at the last moment.

A model letter has been produced by NCADC for people to use as part of their campaign against Air Italy over this issue. A further demonstration, was held on Saturday October 17th in Parliament Square and it was addressed by two deportees, who had been returned to Brook House detention centre, they spoke on the phone and told protesters, via a megaphone, of the violence and mistreatment they had experienced during the deportation at the hands of immigration officers and private security guards. 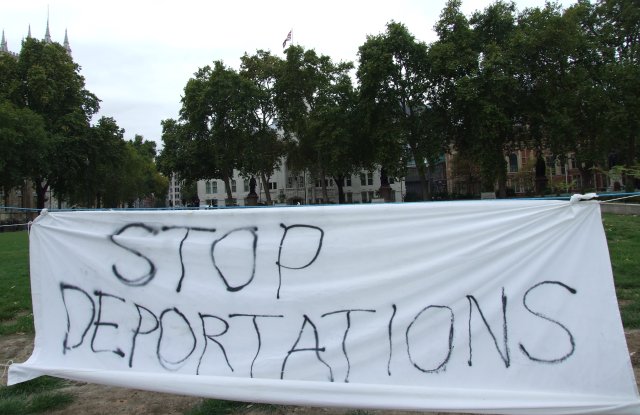