On Friday, 6th November, pro-Palestinian activists carried out a blockade at Carmel Agrexco’s depot in Hayes, Middlesex. The activists D-locked themselves to cages constructed with temporary fencing and positioned themselves to block the two access roads to the depot.
At about 6 o'clock this morning a group of London students and international activists, including members of the International Solidarity Movement (ISM), blocked the two gates leading to the depot. The activists seek to raise awareness of the UK’s continued role in the purchase of goods produced in Israel’s illegal settlements in the West Bank as well as Carmel Agrexco’s role in the sustenance of Israel’s illegal expansionist activities in Palestine.

The blockaders have urged companies dependent on Carmel Agrexco’s supplies, and therefore inconvenienced by this and previous blockades, to seek out new suppliers and, in so doing, show that Carmel Agrexco’s continued support for Israel’s aggression in Palestine will not be allowed to continue.

At 12.30 the blockade was still going strong, with both gates completely blocked, preventing vehicles from entering or leaving the premises.

Police have told protestors that they might be 'obstructing the highway' or committing trespass. When asked if they meant aggravated trespass, the police said no. This means that the offence would be civil, rather than criminal. At the original Agrexco trial in 2006, evidence established that there was no public highway at the positions where the blockades have been set up.

Campaigners maintain that Agrexco's trade in settlement produce is not lawful activity. Gaza continues to be subject to an inhumane blockade. 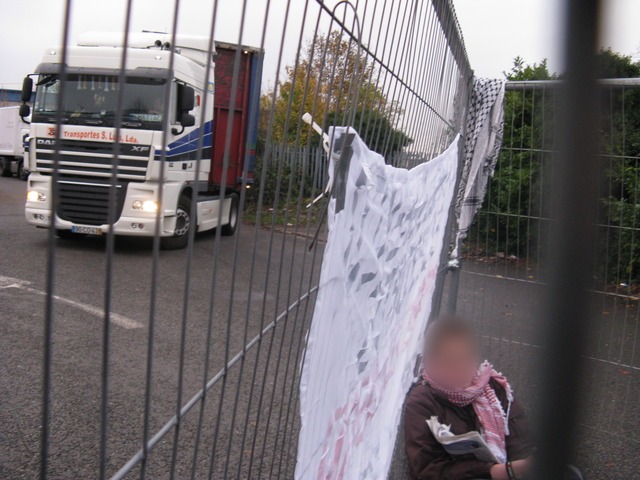 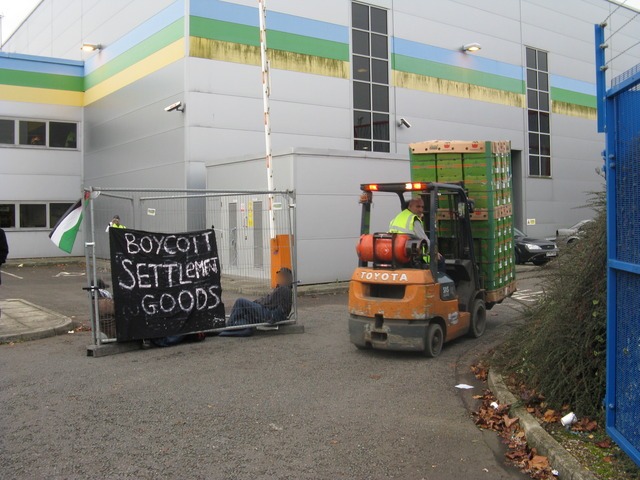 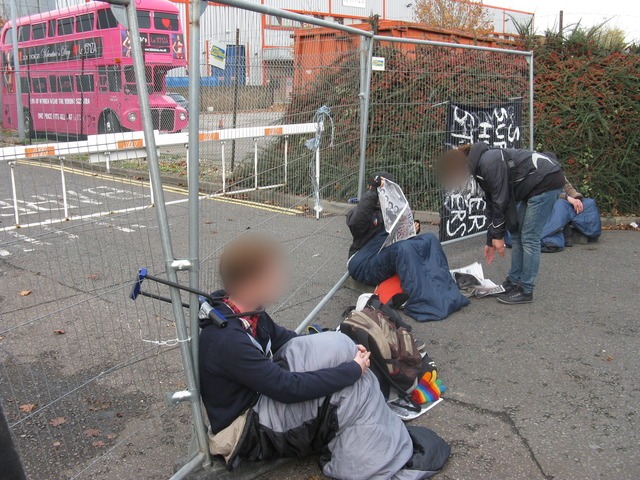 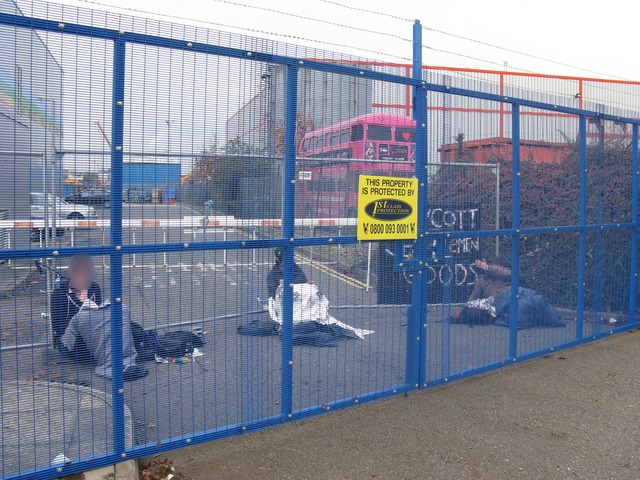 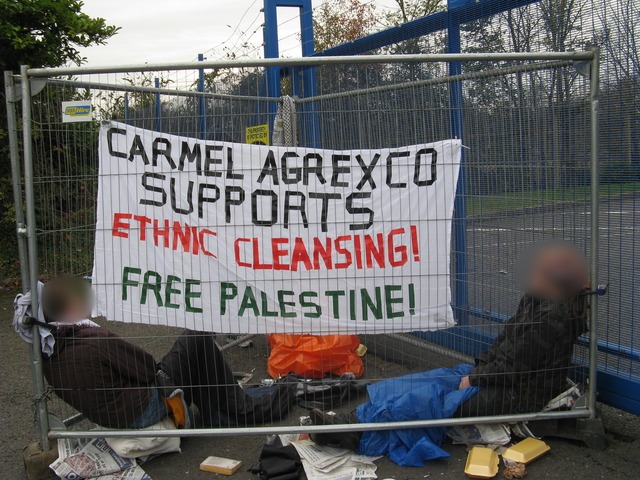 Up Date on the day

The blockade finally ended having started at 6.15am it went on till 2:30pm for a total of 8 hours.

Part way through the demonstration, Carmel workers managed to find a space through which they could manoeuvre forklift trucks, they managed to load one waiting lorry with goods, despite activists attempting to blockade this by standing in front of them and Carmel workers being very keen to ram those present. Acknowledging this option, the blockaders managed a feat of ingenuity and re-positioned the fencing to blockade the whole of the access gate these preventing any further efforts by the workers to get produce through to waiting vehicles.

In response to the shift in positioning, Carmel closed the external gates trapping both blockaders and supporters inside Carmel property. Supporters were finally let out, however the blockaders were trapped inside. Despite the calmness in those present for all of the morning, Agrexco workers became aggressive both physically and verbally with both those blockading and those supporting. Police present did little to stem the aggression with Agrexco workers attempting to intimidate the blockaders and continued to verbally threaten supporters claiming they were going to "Fuck you over".

Pressure was mounting in a situation where activists were put at considerable risk of harm whereby those blockading were trapped inside the Agrexco gates and supporters were not able to directly access them.

After some time of tense standoff, blockaders were finally released at 2:30pm.
The blockade was a success with the site being closed for over eight hours. The police made no arrests however made several warnings that all those present would be arrested under Section 14 of the Public Order Act based upon the claim that the police officer believed that those present were intimidating people by preventing Carmel employees from conducting their business.

you cant be arrested for the civil tort of 'trespass' without a court first issuing an order giving notice and it would have to be agrexco who went to court not the police.

the reason why so many criticise israel is because it receives obscene amounts of totally ill-deserved support from the great bully of the world. so just how much aid? the us gives more aid to that shitty little arsehole-of-the-world country than it gives to the entire continent of africa.