On Sunday, 7th February, French Police attacked the Kronstadt Hangar as part of an ongoing campaign of repression against migrants, which included the destruction of many migrant camps and squats in July 2009. The Hangar had been hired by the No Border Network and the French organisation SôS Soutien aux Sans Papiers as an autonomous space for migrants and activists struggling for the right to freedom of movement. Before the Hangar was opened, migrants had been meeting up outside the night shelter during the day, but the night shelter had finally closed at about the time the hangar opened its doors on 6th February. 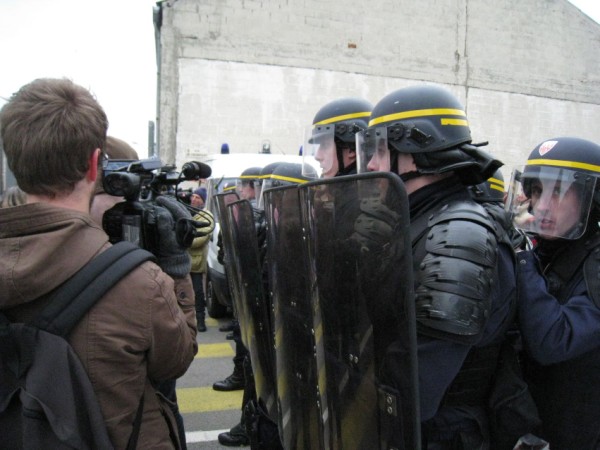 At about 5pm on that day, police began appearing outside the Hangar in an attempt to prevent migrants entering. At 7 pm migrants who had attended an NGO Food distribution point away from the hangar, managed to break through police lines in order to get inside, where they spent the night.

At lunchtime the following day, migrants left the Hangar to attend another food distribution point, and on their return, once again found all roads to the hangar blockaded by police who then smashed their way into the hangar with a battering ram, arresting the 12 activists who had remained inside. Having illegally evicted the building, police then welded it shut.

Upon their release, activists discovered that police had been roaming the area arresting migrants they came across. Many migrants were believed to have gone into hiding, whilst others grouped together to offer resistance. Activists and migrants are now regrouping to consider their next moves.

On Tuesday 9th February, a solidarity demonstration was held outside the french Consulate in London. The handed out leaflets demanding "an immediate end of the repression against volunteers in Calais and the opening of the border between the UK and France! The transnational NoBorders Network will continue its work in Calais. The authorities in Calais have been trying to remove migrants from Calais for years without success, because they are in denial about the terminal reality of the un-equal world we live in. This is not over, solidarity and resistance for the right to freedom of movement will continue."