For the first time in the history of the Norwegian Nobel Committee, a preemptive request to withdraw a nomination—by the nominee—was made.

It was revealed last week that in a letter to the Committee, Mordechai Vanunu had asked for his candidacy to be rescinded. It was unusual enough for Geir Lundestad to acknowledge that a nomination had even been received, let alone publicly disclose Vanunu’s request. But for Vanunu—a man who should have been awarded the Peace Prize long ago—it was in full keeping with the dignity, integrity and uncompromising nature of one to whom the world owes a great debt. 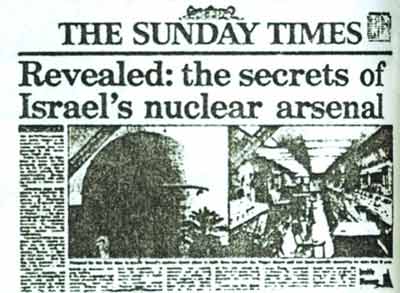 
For the first time in the history of the Norwegian Nobel Committee, a preemptive request to withdraw a nomination—by the nominee—was made.

It was revealed last week that in a letter to the Committee, Mordechai Vanunu had asked for his candidacy to be rescinded. It was unusual enough for Geir Lundestad to acknowledge that a nomination had even been received, let alone publicly disclose Vanunu’s request. But for Vanunu—a man who should have been awarded the Peace Prize long ago—it was in full keeping with the dignity, integrity and uncompromising nature of one to whom the world owes a great debt.

Vanunu worked as a technician at Israel’s Dimona nuclear plant in the Negev Desert from 1976-1985. In a 1986 interview with The Sunday Times, he courageously exposed, for the first time, his country’s clandestine nuclear activity. A week prior to the interview’s publication, he was lured by a Mossad agent from London to Rome, where he was apprehended and whisked off to Israel. In secret proceedings, Vanunu stood trial for treason, was swiftly convicted, and sentenced to 18 years behind bars. He spent more than 11 of them in solitary confinement.

Vanunu was released from Ashkelon’s Shikma prison in April 2004, unapologetic and unrepentant. “I am proud and happy to do what I did,” he said.

As for enduring nearly two decades of incarceration?

Conditions of his parole prohibited him from speaking with journalists, supporters, or non-Israelis of any kind. He was restricted from travelling within the country and barred altogether from leaving it.

In 2007, Vanunu was found to be in violation of his parole, in part for attempting to travel from Jerusalem to Bethlehem, and it landed him in jail for another three months. Being a convert to Christianity and an advocate for Palestinian rights did not help his case, but only served to increase the scorn heaped upon him by his countrymen.

Although the term “whistleblower” is usually appended to Vanunu’s name, the description is weak and understated. He was more like the “siren” that alerted the world to Israel’s undeclared nuclear bombs and the introduction of weapons of mass destruction to the Middle East.

In 1953, Israeli Prime Minister David Ben Gurion appointed a young Shimon Peres to become Director-General of the Ministry of Defense. Acting in this capacity, Peres helped draw up the 1956 Protocol of Sèvers (in the run-up to the British, French and Israeli attack on Suez). Those meetings led him to enlist France’s help in constructing the Negev Nuclear Research Center.

Peres’ critical involvement in developing Israel’s nuclear capability was detailed in “Shimon Peres – The Biography” by historian Michael Ben-Zohar. According to Reuters, “The book divulges new details of how Peres served as a behind-the-scenes architect of Israel's military might, securing weapons secretly and buying an atomic reactor from France.”

It was specifically because Peres had pioneered Israel’s nuclear weapons program that Vanunu asked his name be taken off the list of Nobel candidates. He wanted no association with the alleged “dove,” who as foreign minister was the recipient of the 1994 Peace Prize along with Israeli Prime Minister Yitzhak Rabin and Palestinian National Authority President Yasser Arafat.


Shimon Peres – apologist for a massacre

It was during Israel’s “Grapes of Wrath” campaign in Lebanon that the April 1996 Qana massacre took place. At a United Nations compound near the village of Qana, 800 Lebanese civilians had sought refuge from the fighting. Showing utter disregard for both the U.N. and the civilians they sheltered, the compound was shelled by the Israelis, killing 106 innocents and injuring more than 100.

Israel first said Hezbollah positions and not the U.N compound was their target (although they were aware of its exact coordinates). They later said the facility was inadvertently hit due to “incorrect targeting based on erroneous data” and the use of outdates maps (the ever-shifting explanations offered by the Israelis for a deliberate strike of a U.N. facility would later be repeated in the 2008-2009 Gaza War).

It was then Prime Minister Peres who finally justified the attack by blaming Hezbollah for it, using the tired, discredited, and oft-repeated “human shield” excuse (yet another tool used again by the Israel Defense Forces to rationalize the massacre of civilians in the Gaza War).

A subsequent U.N. investigation concluded it was unlikely that the shelling of the Qana compound was due to gross technical or procedural errors. An investigation conducted by Amnesty International found that the attack was “intentional and is condemned.” Human Rights Watch's report similarly stated, “We have declared this a massacre that was intentional using very highly accurate missiles and explosives.”


What the Nobel Committee and Vanunu should do

As the person who exposed Israel’s nuclear weapons program, Vanunu’s conscientious, principled position of requesting his name be removed from consideration for the same Peace Prize won by the man who fathered it, is admirable.

The Nobel Committee should not only continue to consider Vanunu however, but award its Peace Prize to him, if for no other reason than to redeem itself as a body recognizing deeds, not hopes.

An ignominious spotlight would then shine on Israel for preventing Vanunu from traveling to Norway to accept it, although he would still likely decline the Prize. If permitted to hold a press conference, it would give Vanunu the opportunity to tell the world of Peres’ shameful role in introducing nuclear weapons to the Middle East, to talk of the massacre at Qana that occurred under his leadership, to speak about the war crimes committed in Gaza and of Israel’s brutal occupation of East Jerusalem and the West Bank.

It is time once again for the Siren to sound.


* Rannie Amiri is an independent Middle East commentator. He may be reached at