Anti-coal campaigners have set up a protest camp in Shropshire to fight the establishment of an open cast coal mine in an area of outstanding local beauty.

In 2007 UK Coal submitted plans to Telford and Wrekin Council to open cast mine 900,000 tons of poor quality coal from an area at the foot of the Wrekin in Telford over 32 months. The plans included destroying parts of an ancient woodland and will be responsible for a minimum of 1,500,000 tonnes of CO2 emitted into the atmosphere. The Wrekin is an Area of Outstanding Natural Beauty.

After discovering last week that many of the trees had already been felled signaling that work was due to begin imminently, West Midlands Climate Action and a coalition of local groups and activists last week swooped upon the Huntington Lane Surface Mine Site to claim the land.

As part of Fossil Fools Day, West Midlands Climate Action are putting on a weekend gathering at the newly established Huntington Lane Camp from April 1st to 4th. The weekend will include a ramble over the proposed Surface Mine Site, Banner drops, campaign planning and most importantly carrying out any work on site that needs doing to help establish a permanent base on site. They are calling on people to attend the weekend, and to support and defend the camp in any way they can. 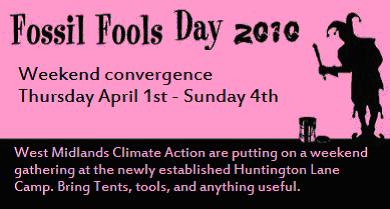