Remember how the EDL pretend they are not a far right quasi-fascist organisation? How they say they are focused only on ‘militant Islam’ and are not against all Muslims, or racist against all Asian people? Well, we have already proved that the EDL are racist (see post below), and their are plenty of photo’s of neo-nazis attending their rallies.

Now, however they have blown their cover, and have revealed their hatred of Britain’s trades unions and working class movements. This has been made apparent in a shocking anti-trades union ‘red-baiting’ frenzy that has appeared on the front page of their website. This shows the real agenda of the EDL and their millionaire puppeteers – to drive working class organisations out of British political life. 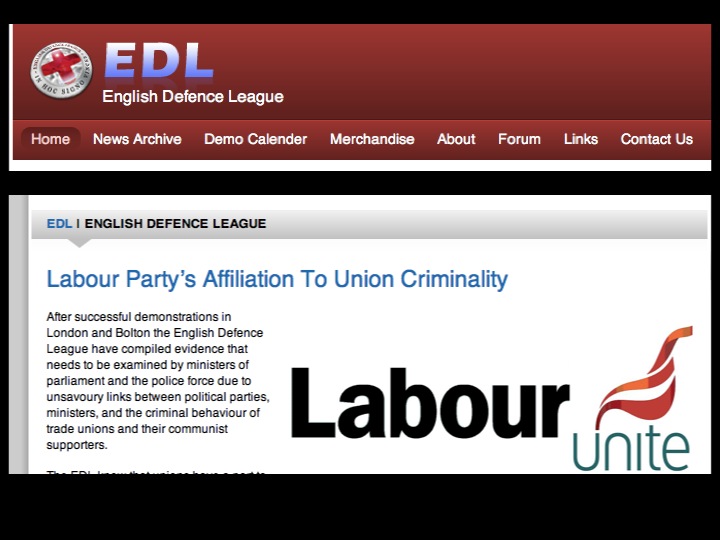 This is the latest revealing public statement from the EDL front page:

“unions have become more powerful, more influential and more militant in the political sphere, this is where vested interests infringe upon a democratic political platform, so much so that democracy seems to be ebbing away right before our eyes and its replacement………COMMUNISM!!!!
Great Britain doesn’t do Communism, it never has, yet Communists are afforded more influence and more power as the Labour party look to fund its upcoming election campaign. This is a sad reflection of the corrupt political climate we live in here in the UK.
It is no secret that the Labour party is affiliated to Unite, recently the Labour party have been exposed for taking monies from this militant Union. Since Gordon Brown became the Labour party’s leader and current prime minister he has taken a staggering 11 million pounds from Unites militant coffers, people such as Charlie Whelan and Tony Woodley are now allowed to roam the corridors of power in the houses of parliament because they have been given parliamentary passes! No guessing as to the reasons why they have such privileged access to the corridors of power! Is it any wonder that half of the Labour cabinet are bankrolled by Unite? You can see a more in-depth article from The Sun here….”

So its clear – the EDL are lying when they say they are for the English people! They are not for us, the English working classes – only right wing anti-trades union racists! They hate the millions of us ordinary working people who join unions. The EDL publish this disgusting right wing attack at a time when the multinational corporate BA is trying to smash the Unite union amongst its low paid workers. The agenda of this article is clear – to deprive the working class of any organised political voice inside parliament. Instead, they champion the corporate voice of the right wing tabloid ‘the sun’ owned by a billionaire, Rupert Murdoch (who of course, is not English, but who chose US citizenship). The EDL are bosses tools.

Soon we will all have to fight the massive wave of job cuts, as Labour / Tories /Lib Dems all prepare to implement the big business and billionaires agenda of massive cutbacks. This is the final battle for Britain’s welfare state, a battle between rich and poor, between the working people and the global banking and financial elites, and the EDL are a weapon being made to be used against us. This attack on our schools, hospitals and other public services will be to pay for the crisis caused by the greedy ultra-rich banking elite. Such moves will represent an enormous transfer of wealth away from the working people in the interests of this global elite, with our rights to decent pensions, jobs and services all axed. Future generations will suffer. And in order to do this, the capitalists will need to divide the working class.

Thats why the EDL, the bosses new tool, in collaboration with the media that the bosses also own, are whipping up their stupid phony ‘islamophobic panic’. They make the bizarre and exaggerated claim that the tiny British Muslim ethnic minority, who make up just 2.7% of our population, are about to take over Britain and impose Sharia law! The EDL’s master plan is to set worker against worker, first dividing us on religious lines. Anti-Muslim hatred is the thin end of the wedge, the easiest prejudice to whip up because of the climate of fear already generated by Blair and Browns bloody and criminal wars in Iraq and Afghanistan. From this start, the EDL’s secret bosses hope the poison of division will spread, tearing the working class apart and leaving it defenceless in the face of the growing offensive by big businesses and global finance …

The EDL are bankrolled by millionaire buisinessman Alan Lake to do this dirty job. Lake talks of dominating the streets, and has said: “Football fans are a potential source of support. They are a hoi polloi that gets off their backsides and travels to a city and they are available before and after matches.” These are the puppets he intends to use to promote the right wing agenda of big business against the trades unions and the English working people. Any working class person who supports the EDL is a fool and a class traitor.


This article found at: