It has been a busy start to 2010 for Nottingham hunt saboteurs who have been sabbing in collaboration with sabs from Sheffield and Leeds. Hunts across the Midlands and North of England have been sabbed, in some cases for the first time in several years. The Lunesdale hunt on the Cumbria/North Yorkshire border, for instance, hasn't been sabbed in more than 20 years.

In spite of the legal ban on hunting with hounds coming into force in 2005, most hunts continue as they did before. The police, used to protecting hunts and repressing saboteurs, have changed little in their approach. Hunt saboteurs use direct action to save the lives of hunted animals.

It isn't just foxes which have been saved. Sabs have also intervened to stop ferreters and hare coursers. Now the hunt season is over until August/September, local sabs are considering sabbing some mink hunters in the summer and willl be working to protect badgers from baiting in South Yorkshire, and from culling further afield, from May. 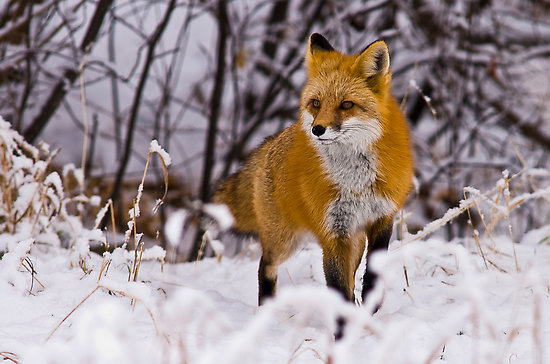 Foxes, hares, and our group alike had a few days off from the sickening display of violence and stupidity that is hunting this December and January. Divine intervention, in the form of snow, ice and frost meant that many hunts cancelled several meets.

We were out again on January 16th and had a go at finding some much overlooked beagles, without success. So we decided to call in late on the Badsworth & Bramham Moor hunt. The hunt, who on this occasion totaled only 10 or so riders and about 10 supporters, took one look at us, changed course and headed straight back to their meet!

We helped Cumbria Sabs with a Monday visit to the Ullswater hunt on Jan 25th. This hunt had not been sabbed for 20 years due to their violent reputation, but on sight of around 15 sabs, they decided to run, and hide in the car park of an agricultural college - all day. Result!

We visited the Quorn hunt for the first time in 5 or more years, with Merseyside Sabs at the end of Jan. They too took one look at us and packed up immediately, claiming the weather wasn’t suitable for hunting! With some sabs escorting the Quorn back to their kennels, others went on to the nearby Meynell & South Staffs hunt. At the Meynell a fox was seen by sabs and hunt staff in the same field as the hounds, but due to our presence, the huntsman hunted the hounds along the foxes’ scent, in the opposite direction, leaving the fox to run free. Later in the day we saw hunt staff again taking action to ensure the hounds didn’t hunt in front of our cameras. We know that this hunt (like all the others), kills foxes when left to their own devices.

On Feb 6th we paid a visit to the South Wold hunt, who had not been sabbed for a long time. The hunt spent a good while lingering round the back of a farm pondering what to do about us. Although they eventually shot off, losing us for a while, we caught up with them, took control of their hounds, and packed them up early - a timely reminder to all hunts that though perhaps rarely visited, none are forgotten. On the way home, keen-eyed sabs spotted a lurcher racing through a nearby field. Jumping out of the van again, we found a guy out hare coursing, and swiftly saw him off.

The next day we sabbed a group of about 8 ferreters near Leeds. They had sadly killed at least 3 rabbits before we arrived - a strong reminder of why sabbing is needed. The group were clearly intimidated by our presence and packed up as soon as they could retrieve their ferret from below ground. Ferreting is fully legal.

In 2009, our visits to the South Notts hunt caused them to give up on attempts to begin hunting Saturdays. So when we turned up on a Monday this Feb, they weren’t best pleased! Unfortunately though, they won this round by turning violent and forcing us to leave - more on that next season (and below).

On the 17th, Nottingham and Birmingham sabs made a week-day trip to the DNS Beagles hunt in Derbyshire. This caused them to cancel their day of killing without even starting. All we had to do was wait outside their kennels for a few hours, and endure some stern words from some not-so-brave officers of the law!

We sabbed the Quorn hunt again on the 20th, with Manchester Sabs. We weren’t close enough to see it, but, after a few failed attempts at finding foxes - to kill them with a “quick nip to the back of the neck” - the huntsman fell from his horse, injured his neck and had to be air lifted to hospital! The hunt continued anyway, led and followed by members of the South Notts hunt, who were out with the Quorn (due to cancelling their own Sat meets). The South Notts hunt members were the very same people who had got nasty with us just 5 days previously. So, we gave them what they deserved - a good sabbing. We put ourselves in the fields to distract the hounds several times, and caused them to loose the scent of a fox that they attempted to hunt.

On the 24th we made another trip to Cumbria, joining the local sabs, with others from Merseyside and Birminham. We found the Blencathra hunt after a bit of scouting about, even though they had changed their meet in a desperate attempt at avoiding sabs. Upon our arrival, the huntsman walked past all his supporters and drove off with the hounds, without saying a word to anyone! But, rather than driving straight to the kennels, he drove way out of the way, with us following behind, and led us to the Cumbria Beagles hunt! As soon as we got out of the car, the beagles were seen hunting two hares, so we intervened and managed to call them off using whip cracks and voice calls, they packed up straight away after that! Some of the group had also stuck with the Blencathra, who were followed back to their kennels. This day demonstrated just what an impact Cumbria Sabs are having on the Blecathra hunt!

At the end of Feb, just a week after our first visit, we returned to the DNS Beagles, this time on a Saturday. As before, after a bit of a run around (in vehicles), they cancelled their plans altogether. Another day of relaxation for hares in Derbyshire!

We sabbed the Burton at their last meet of the season on March 6th. We had to run/briskly walk all day to keep near the hunt, who were determined to hunt and hide in a massive wood. We took action to disrupt them whenever we could, took control of a good percentage of the hounds several times during the day and stuck at it till they finished.

We visited the Lunesdale hunt on the Cumbria/North Yorkshire border with sabs from several other groups on the 11th. This hunt hadn’t seen sabs for 20+ years, so they were probably a little surprised to see us pop up in the middle of the fells. We didn’t waste any time, and upon sight of the huntsman on a distant fell ahead, took the whole pack of hounds from him just as they started to pick up a fox’s scent. When the hunt managed to reclaim the hounds they went back to their meet and packed up! Watch video footage here.

We finished off the season with around 30 sabs from our usual groups, Merseyside, and other areas, and sabbed the Grove & Rufford hunt in Nottinghamshire, on March 13th. Dozens of police turned up - with motorbikes, a helicopter, vans, cars, horses, dogs and undercover officers at their disposal. They had come to prevent us from sabbing the hunt, but inadvertently did it for us, leaving us to watch in disbelief - as even the Grove & Rufford huntsman isn’t stupid enough to hunt in front of that many city folk!

So now we have a short break from such activities, but, if anyone is up for helping out, we will possibly sab some mink hunters in the summer; we’ll be working to protect badgers from baiting in South Yorkshire, and from culling further afield, from May; and we’ll begin the next sabbing season in August/September at fox cub hunts. Also if anyone can donate any funds or equipment, or help with fundraising then please get in touch!

For sabbing and badger protection contacts, see the original article.