Un-policing the borders of Fortress Europe

On 23rd March 2010, a high-profile conference about 'policing the borders' that brought together Frontex, the UK Border Agency and senior police officers from various UK police forces was disrupted by No Borders activists protesting against Fortress Europe [press release | video]. Protesters have since posted two of the main presentations that were included in the welcome packs left behind by the delegates who rushed out of the conference hall, one by Frontex on "how to solve cross-border challenges and create an integrated border control system" and the other by ACPO on "the national strategy for UK border policing." 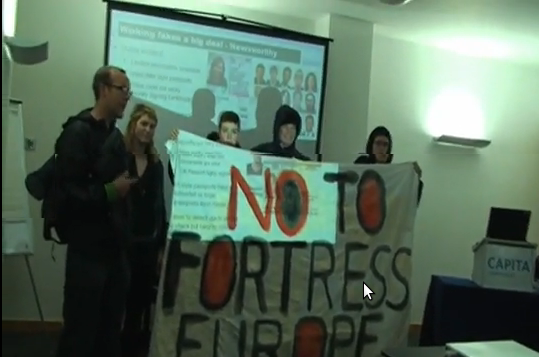 The event, organised by Capita Conferences, was the second annual 'Policing the Borders' conference. Described by the organisers as a "learning and networking opportunity," the event gathered representatives of the European border agency Frontex, the Identity and Passport Service and senior officers from the Association of Chief Police Officers, the Metropolitan Police, Sussex Police and various other police forces. It featured an exhibition about border security and surveillance technology, which included Serco promotional posters. Capita Conferences, part of Capita Plc, is a UK company that specialises in organising policy forums and conferences that bring together policy makers (local authorities, government agencies, police forces, etc.) and private or semi-private bodies that use these 'networking opportunities' to influence policy makers and build 'partnerships' with them.

Following the action, Capita Conferences wrote to all delegates apologising for the "disturbance" at the conference and claiming that, "in our 20 years of experience in producing and running conferences, we have never had our events interrupted because of an illegal protest." The letter also promised that Capita will be "reviewing [its] procedures internally to ensure that unauthorised persons do not enter [its] conferences" and that it is currently "talking to [its] venues about security."

Video footage of the protest posted on Indymedia London shows protesters walking in, unfurling a banner that reads 'No to Fortress Europe', and lecturing their shocked audience about freedom of movement and state repression. The high-profile delegates are then seen leaving the hall one by one, some covering their faces to avoid being filmed.

Commenting on the reasons behind the action, one of the protesters said:

"Under the pretexts of 'security', 'terrorism' and 'illegal immigration', hundreds of migrants are everyday denied their freedom of movement, dignity and basic rights. On top of that, the increasingly racist immigration policies create an atmosphere of suspicion, where everyone is under surveillance for unnamed 'crimes'. And to achieve that, European government are outsourcing immigration control to shadowy organisations like Frontex, who do the dirty work for them. From sinking migrants' boats to forcibly deporting people on specially chartered flights, Frontext can be best described as a mercenary army charged with protecting the artificial borders of Fortress Europe."