After the failure of the US/UK states to allow one single sanction against Israel, following the attack on the Flotilla boat yesterday, news is breaking that another two boats are already en route to Gaza.

The MV Rachel Corrie, which was held up in Malta due to technical problems is currently sailing towards Gaza with a crew of Irish and Malaysian activists in a bid to deliver its cargo of aid supplies to the besieged people of Gaza. It is expected to reach Gazan teritorial waters tomorrow, according to a spokeswoman for the Irish Palestine Solidarity Campaign said, quoted in the Irish times. However, Greta Berlin, a spokesperson for the Free Gaza Movement said that the boat may not arrive until next week. 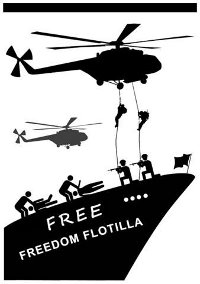 When it does arrive, the MV Rachel Corrie which is carrying Nobel laureate Maireád Corrigan-Maguire and former UN assistant secretary general Denis Halliday, can expect a harsh response from the unbowed and murderous Israeli State. Utilising the fictitious spin put out by the Israeli propaganda, a "a top Navy commander" told The Jerusalem Post today that:

Whether he is relaying Israel's intention to commit an atrocity of a ship flying under an Irish flag, or is just making it up remains to be seen. Another Israeli news source notes that IDF General Staff Operations Commander Col. Itzik Turjeman told the Knesset that the boats 'would be stopped', "hinting that electronic means, or others, might be used."

A second attack on an aid carrying vessel in international waters, which is tantamount to a declaration of war on the ship's country of origin, would no doubt increase the outrage of many people, whilst the reaction of the cowarldy leadership of the West is likely to be words that are not backed up with action.

The Free Gaza Movement is not just about aid - it is primarily about the right of Palestinians to have sea, land and air routes to the rest of the world and for all aspects of the blockade to end.

A second demo has been called in London for 5.30pm today, outside the Israeli Embassy in South Kensington