At 4.30am local time, armed Israeli troops boarded one of the boats in the Free Gaza Flotilla which was carrying construction supplies, medical equipment and schoolbooks to Gaza, in an attempt to break the siege which Israel imposed on Gaza over 1080 days ago.

35 UK citizens were aboard the boats, which carried activists from over 50 countries. The boats were reportedly 80 miles off the coast of Gaza, and many on the boats were said to be asleep when Israeli troops opened fire with machine guns. Many wounded have reportedly been taken to Israeli hospitals. Israel is on a media offensive claiming that its troops were attacked first. Even if it were true, they would need to explain why they were boarding a ship flying a Turkish flag in International waters.

ISM London stated that they were "horrified" by the incident but also stated that "We’re not surprised that the attacks took place in International waters, or that they were a reckless, murderous over-reaction to unarmed ships carrying medical supplies and building materials. Israel routinely meets non violent Palestinian protest with lethal violence."

On the 31st May protests were held across the country with reports coming in from London, Cambridge, Bristol, Birmingham, Sheffield, Manchester, and Galway. In London the protest moved on from Downing Street to the Israeli Embassy, whilst in Bristol a protest was held in solidarity with Palestinians and the two Bristolians aboard the attacked convoy. In Galway a protest was held inside Marks & Spencer in protest of their support of the occupation, and in Manchester protesters attempted to storm the BBC building in protest of biased reporting.

UPDATE: On Tuesday 15th June two survivors of the attack, Alex Phillips and Osama Qashoo who were on board the Mavi Marmara spoke at a public meeting in Sheffield organised by the Sheffield Palestine Solidarity Campaign. 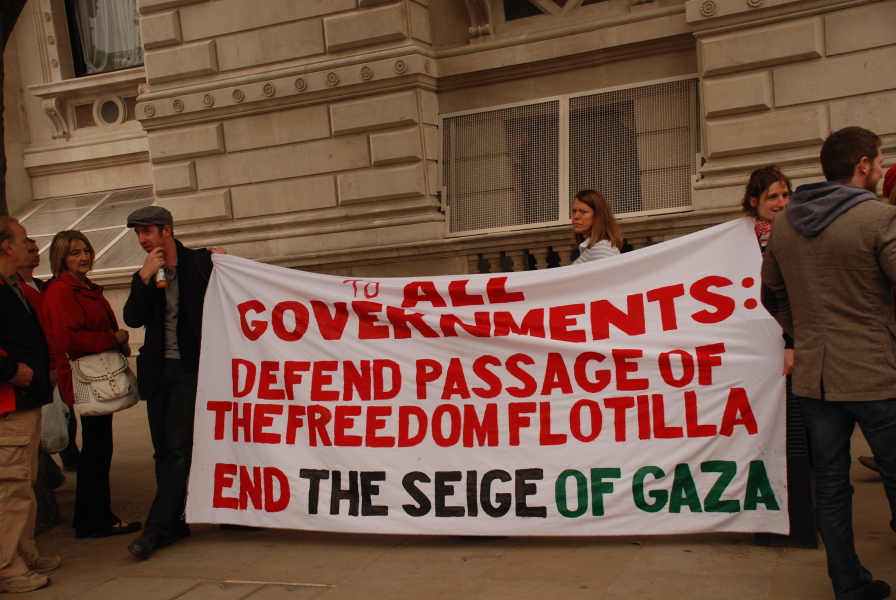