Zionists and EDL Unite for counter-demo at Ahava

In celebration of the recent court victory which saw four campaigners acquitted for blockading the Ahava shop in Covent Garden during 2009, approximately 60 protestors gathered outside its doors in Monmouth Street, central London, to celebrate and continue promoting boycott, divestment and sanctions against the Israeli occupation. While demonstrators were met by the usual Zionist counter-demonstrators, on this occasion they arrived flanked by the openly racist English Defence League.[video] 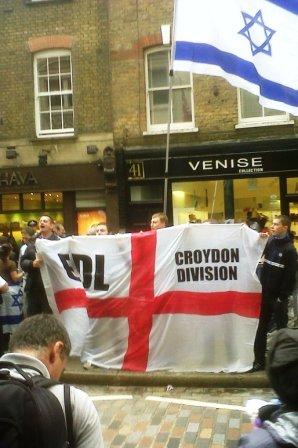 The cosmetics retailer and spa Ahava manufactures it’s products on the illegal Israeli settlement of Mitzpe Shalem. It has openly flouted tax requirements by exploiting the EU-Israel trade agreement and violates UK DEFRA guidelines in respect of proper labelling. The campaign against Ahava supports the Palestinian call for Boycott, Divestment and Sanctions as a global nonviolent means to challenge the Israeli Occupation of Palestine and the ongoing siege upon Gaza.

At the outset the small group of around ten EDL members remained close to the Zionist contingent of Ahava supporters, handing out leaflets. Over the course of the demonstration they began to take an increasingly prominent role, culminating with an unravelling of a flag of St. George and chanting “E-E-EDL.” This was accompanied by racist remarks towards a number of Ahava protestors who were of Asian/Middle Eastern descent. What was more surprising was the absolute lack of distancing from the EDL by the Zionist contingent.

Vice chair of the Zionist Federation of Britain Jonathan Hoffman was present and took no action to ensure the two groups were not affiliated. This comes only days after a recent report in the Israeli paper Haaretz claiming that the Board of Deputies of British Jews were not affiliated with the EDL and did not want anything to do with them. The stark contrast between the formal statement and the reality in front of the Ahava shop, in which senior members of the ZF stood along side EDL members undercuts any public statements and shows Zionists hold a racist agenda.

The EDL’s history of far right opinions and racist chanting and abuse — as well as their violence and hatred towards Muslim communities — have earned them the fascist label. Jewish groups have long since been targeted by rightwing fascist groups, so to see the two groups united against Palestinians illustrates that as far as the Zionist Federation is concerned, the enemy of one's enemy may become an ally no matter what they stand for. That they were welcomed by the Zionists may be shocking to some, but could also be reflective of their desperation for support in the UK.

This is not the first instance of the two groups coming together in support of each other; In the immediate aftermath of the brutal attack on the Mavi Marra flotilla by Israeli commandos in which nine human rights activists were murdered, the EDL joined up with Zionists outside the Israeli embassy in Knightsbridge to show support for the Israeli state’s violent actions.[Video] In addition, the EDL marched to Downing Street two weeks ago with Israeli flags being held alongside British and St. George flags.

Despite their presence and the racist slurs they shouted at members of the Ahava demonstration, the protest went without violence. The verbal abuse hurled by EDL members and their Zionist partners were met with a series of police cautions. Numerous members of the public stopped to chat with Palestinian solidarity activists and showed support. A small brass band played music to entertain the masses and build a celebratory spirit as many people chanted for justice and for an end to the sale of Israeli and Settlement produce.