Having spent £25m on the branding rights to London's new cycle hire scheme, the bright sparks in the Barclays marketing department have started a dialogue with the public which could last for several years. The scheme is part of a private finance initiative providing thousands of rental bikes in return for painting London's roadways in the bank's corporate colours.

Only minutes after the bank unveiled the bikes-for-rent in partnership with the city's Conservative administration, situationist guerrilla teams struck in the night to add their own mobile advertising messages under the Barclays logo. One of the messages, "Funding depleted uranium birth defects in Iraq", was particularly timely. New studies suggest that the ongoing genetic damage caused by the U.S. attack on the Iraqi city of Fallujah in 2004 may be worse than that caused by the atom bombing of Hiroshima and Nagasaki 65 years ago.

Barclays was also targeted in Cambridge on Friday 30th July 2010. 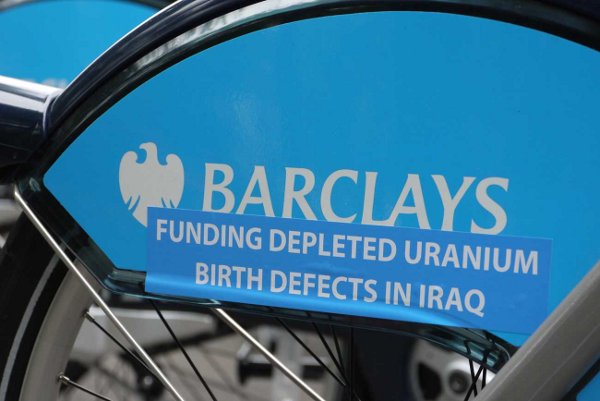 According to the International Campaign to Ban Uranium Weapons, Barclays and RBS are the two UK banks which provide the most funding for the research and production of depleted uranium (DU) munitions. These weapons are special cannon rounds, fired by planes or tanks, which are tipped with a form of very dense nuclear waste. This gives them more penetrating power against armoured or dug-in targets.

Studies suggest that the dust produced by DU munitions impact can significantly raise the rates of genetic defects in places where it's used, leading to higher infant mortality and birth defects.  It is unknown whether this is the result of the radioactive or the other effects of uranium, which is classed as a toxic metal. The radioactive half-life of Uranium-238 is 4.468 billion years.

I saw a report by War on Want that stated that the only UK high street bank with an ethical investment record is the Co-op. All other high street banks in the UK invest in arms. WoW's report is here:

People are just interested in the best rate, not messages

The trouble with the co-op is that if you have ever worked for them you will quickly realise they treat their staff like scum in the call center. About as ethical as a Blue Tuna credit card

These messages wont make a blind bit of difference. No one is going to change their banking practices because of it. People are just interested in the best rate

cocktail onion in a gibson

I changed to Co-op bank for the ethical reasons. Speaking as a customer and not an employee I find them a really excellent bank. I'm very disappointed to hear that they treat their staff badly. Life is a lifelong investigation...