March 26th - All out against the cuts

Latest News: A full roundup of the day and timeline of the events as they unfolded are on Indymedia London.

March 26 looks set to be the biggest street mobilisation in Britain since the anti-war march of 2003, with hundreds of thousands likely to join the TUC's "March for the Alternative". As the Con-Dem government escalates the class war with its cuts package, and following the rebellious creativity of the recent student protests, not to mention the uprisings sweeping the Arab world, will the crowd be content just to obey the TUC leaders and march from A to B? Following several calls to turn it into a day of real action against the government and the economy [NetworkX | Rallying Call | UK Ungoverned], various groups have announced plans including feeder marches, blockades and more. In particular, occupations should be a key theme as UKuncut plan to take over Oxford Street and another secret target, and others call to "Occupy Everything". Will this be the turning point where the energy and rage seen on the streets this winter spreads beyond the youth to workers and all who will stand and fight? Read more...

Actions in the run up: 20 women locking on at Downing Street!!! | Another "Bankers' Budget" From George Osborne 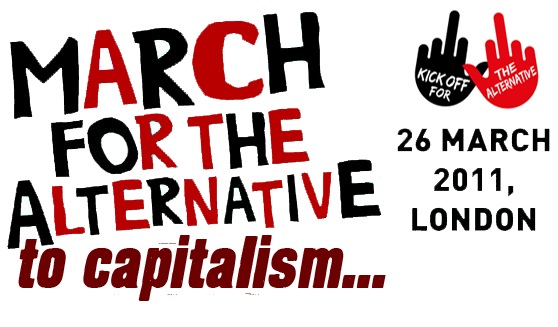 Following months of demonstrations, occupations of town hall's and other buildings, road blockades and widespread campaigning, the national protest against the cuts and for the alternatives is finally taking place on Saturday 26th March at 11am.

Whilst the TUC has announced "there are no official feeder marches" in an echo of the failure by the NUS to support their own students, rank and file anti-cuts campaigners are preparing several feeder marches: The Education Bloc from ULU, a South London feeder from Kennington park, including a Radical Workers Bloc and a North London Feeder from Camden. Other groups are meeting in advance to march together on the day including a newly announced East London Dissident feeder march.

Protests at the Liberal Democrat Conference [2]