As arms companies add the last touches to their macabre exhibits, and military representatives from repressive regimes begin entering the country, activists are preparing to launch a wave of disruptive actions against Europe's largest Arms fair. DSEi will hold its 6th Arms Fair at the Excel Centre in London's Docklands from September 13th to 16th.

Last Thursday, activists from CAAT picketed the RBS in Bishopsgate, which was the advertised location for a pre-DSEI event crassly entitled "Middle East: A vast market for defence and security companies". After the protest was advertised on Indymedia, twitter and Facebook, the organisers claimed the event had been cancelled and removed the advert from the web. However, the event did go ahead at another location.

On the same day, two banks in Bristol, Lloyds TSB and Halifax Broadmead announced that they would not open on Saturday because of an advertised protest by Bristol Against DSEi.

On Saturday activists in kayaks disrupted the journey of the naval Destroyer HMS Dauntless as it attempted to sail from Tilbury Docks to the Excel Centre. The size of the ship means that it can only navigate the river at high tide, and its progress was disrupted for about four hours after the kayakers' intervention. The ship is due to be used as a reception space and for demonstrations during the event.

A coalition of groups under the umbrella of Stop The Arms Fair have promised a wave of actions during the event, with a day of action called for the opening day on the 13th. Planned actions include a Critical Mass in the morning followed by a call to be at Custom House en masse at 10am, an action at the Clarion Defence and Security offices in Earls Court, Bubbles Not Bombs, Sparkles Not Shrapnel, disruption of DLR trains taking delegates to the event, a mass lobby, and a die-in outside BAE at 5pm.

The Arms Dealers Dinner will this year take place, on Thursday 15th, inside the Excel compound, and a Critical mass will leave Bank at 3.30pm to meet up with other protesters.

Disarm DSEi, one of the groups organising the protests said "Tell the arms dealers what you think of their deadly wares and show them that their journey to DSEi will not be an easy ride. It's time to stop the arms dealers in their tracks and make DSEi 2011 a year to remember" 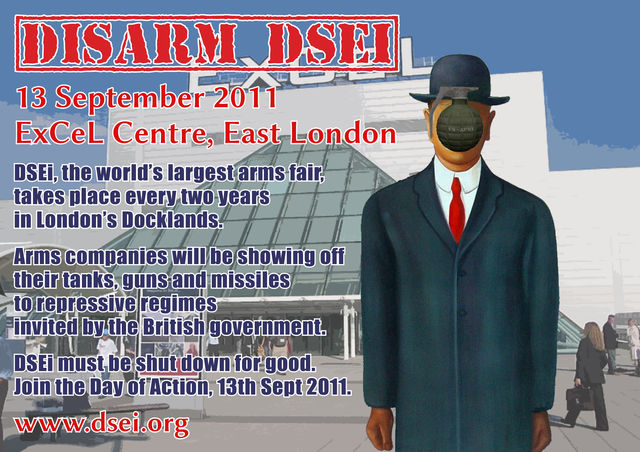