On November 2nd there was a call-out for students and staff at the University of Birmingham to protest against tuition fees, cuts and privatisation. At 2pm they gathered under the University Clock tower to listen to speeches from several students about the effects the rise in tuition fees will have and the negative impacts of privatisation within education. There was concern that the Higher Education White Paper will force Universities to act more like private companies. The government argues that the introduction of competition into the sector will increase choice and quality of education for students. However many of the campaigners felt that this will create a US style model of a few elite, inaccessible universities and a large pool of underfunded poor institutions. There was also anger over the private sector-style pay rises received by the managers at the University. Last year, the Vice-Chancellor David Eastwood received an 11% pay rise increasing his pay to £392,0004. The money the University 'saved' by closing the entire Sociology Department was blown in one year on management pay rises. 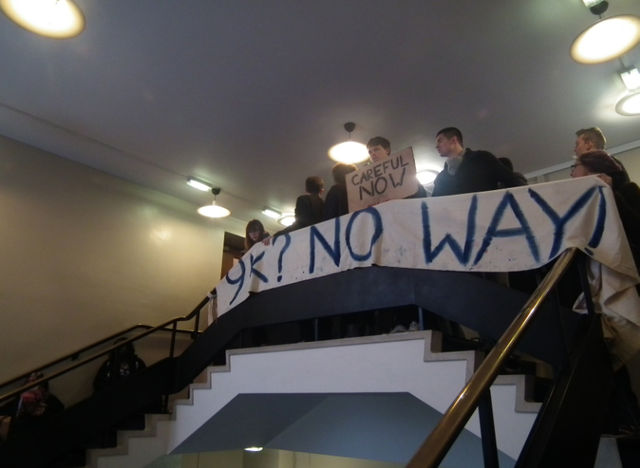 After the speeches there was a brisk march to out-manoeuvre the security which ended with several students gaining access to the Corporate Conference Centre. The protesters were split into two groups at this point as security managed to lock the doors. The two groups then held simultaneous general assemblies with the aim of advancing a set of demands centred on justice in education and educational institutions with people to be treated as human beings and the University to be run for public good, not as a business. Students and academics then spent the next few hours of the occupation debating a statement which was to be published live on their website. The students called on everyone to take action to defend public education and for everyone who cares about public education for the public good to come to the national demo: defend education, stop privatisation.

The two groups agreed that when they left the occupation they would do so as one group, this happened at 5:00pm after democratically stating their alternatives to the fees, cuts and privatisation. This is the first big student action in the build up to November 9th demo.