Sparks Will Fly on November 9th!

Fat Cat bosses from the eight largest construction businesses are seekingto further expand profit margins through moves that would see industry workers lose up to a third of their take home pay. The employers seek to withdraw from various agreements including the Joint Industrial Board (J.I.B.) agreement, and to impose new contracts which would downgrade safety and skill levels. Earlier this month, Balfour Beatty issued 1700 termination notices to workers, and began sacking those who took part in protests and refused to cross picket lines.

Rank and file electricians, calling themselves 'The Sparks' have challenged both their employers and the UNITE union by launching their own wildcat actions whilst remaining in the union. London actions to date include two blockades of Blackfriars station construction site, a picket outside Stratford's new Westfield Shopping Centre and most recently an attempt to blockade 110 Cannon Street, a site run by Gratte Brothers. On arrival the Sparks found that management had already closed the site, and headed for Cannon Street Tube where they held a short rally before marching to the #OccupyLSX camp outside St. Pauls. Outside of London actions have taken place at Sellafield, Grangemouth and Ratcliffe power stations, and Lindsey oil refinery.

Next Wednesday the Sparks will be joined by plumbers, and heating and ventilation engineers from across the country. They plan to assemble at the Shard near London Bridge at 11.30am before marching to the Blackfriars Station site and then on to parliament.

Also taking place on the day, will be the national demonstration against fees, cuts and privatisation which will bring together university, further education and school students from across the country to stage the biggest education protest in the capital since last December. Also planned is a mass walkout of schools, FE colleges and universities by students in support of the demo. The “March on the City” will see thousands descending on the streets of London, starting at the University of London Union, Malet Street through Trafalgar Square and up the Strand, before passing #OccupyLSX camp outside St. Pauls and ending at London Metropolitan University Moorgate campus next to the City of London, the heart of the financial capital. The day of protest is aimed at the government’s education reform bill which is a crude attempt to corporatise the education sector. 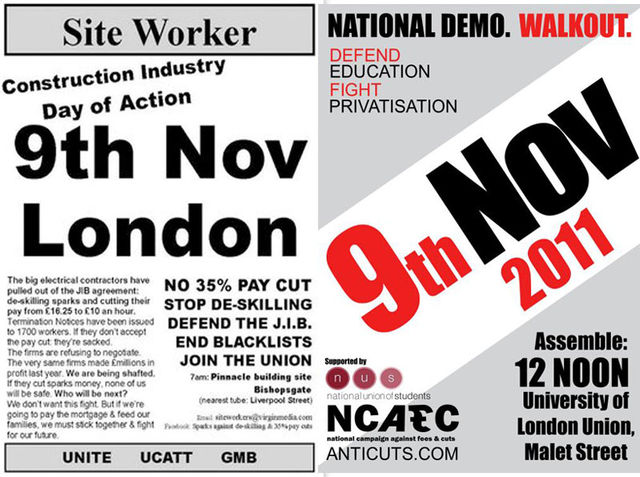 "Next Wednesday the Sparks will be joined by plumbers, and heating and ventilation engineers from across the country. They plan to assemble at the Shard near London Bridge at 11.30am before marching to the Blackfriars Station site and then on to parliament."

First protest of the day is at 7am at the Pinnacle, Bishopsgate, (south of Liverpool Street stn.) and there will be other actions before the rally at the Shard at 11.30am. Also, marching to parliament is what the Unite bureaucracy want the sparks to do; the rank & file may have other ideas!