Report and Photos from protest at Wales-Israel match in Wrexham

Yesterday evening, pro-Palestine activists from the local area and across the country including south Wales, north west Wales, Liverpool, Chester, Manchester and London demonstrated inside and outside the Wrexham Racecourse football ground. The action was called in protest at Israel's participation in international competitions while the Palestinian team is prevented from taking part, while Palestinian footballers including Mahmoud al Sarsak remain imprisoned without charge or trial, and while Israel continues to maintain its Apartheid regime. 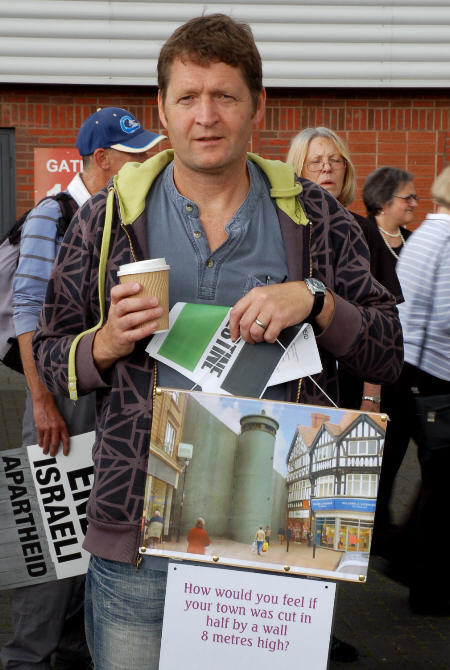 How would you feel if your town was cut in half by an 8 metre high wall? 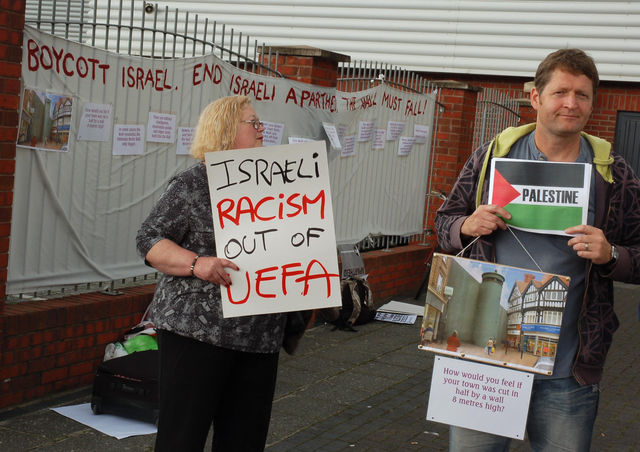 Israeli racism out of UEFA 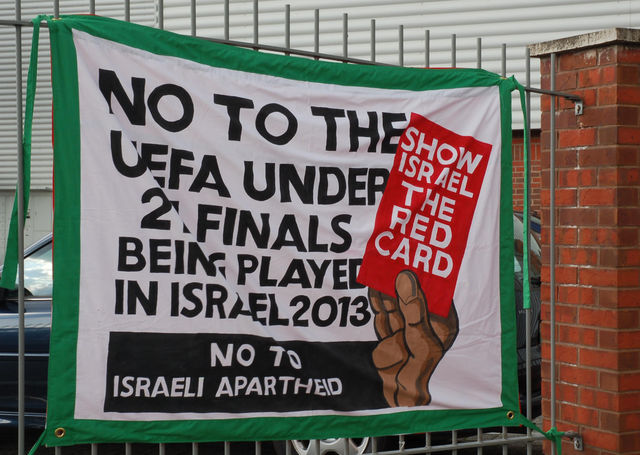 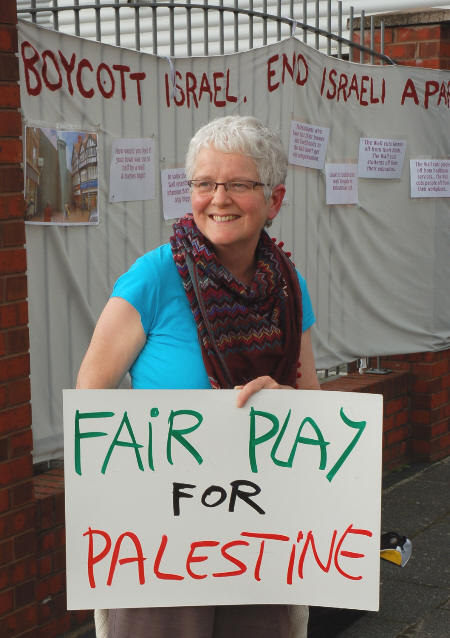 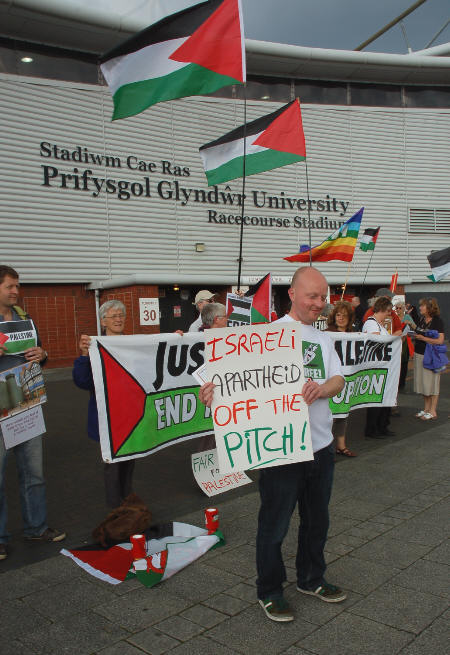 Israeli apartheid off the pitch! 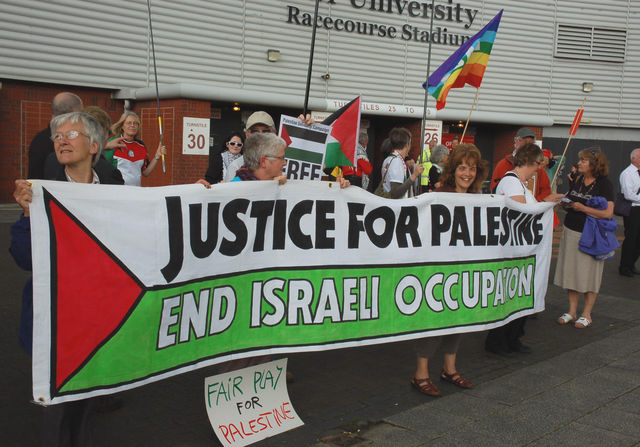 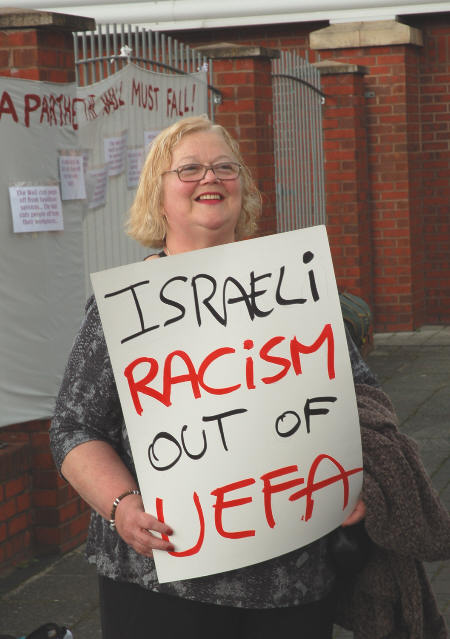 Racism out of UEFA 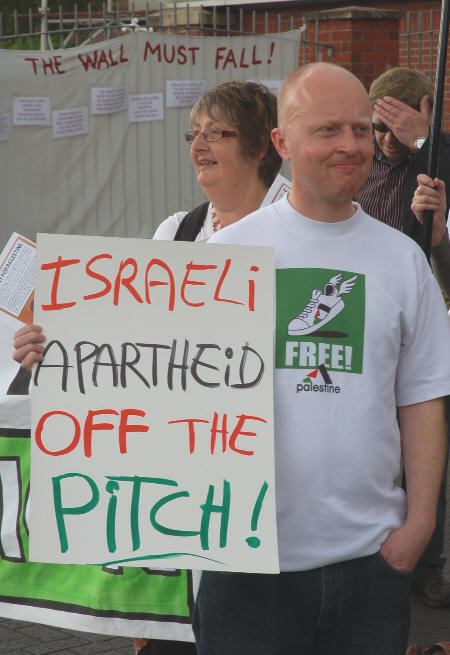 once again: Apartheid off the pitch! 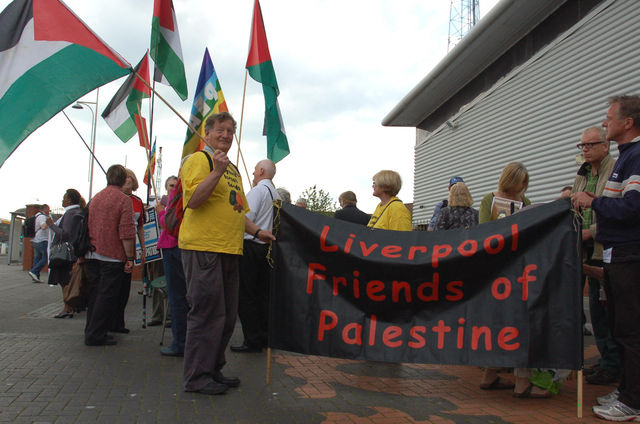 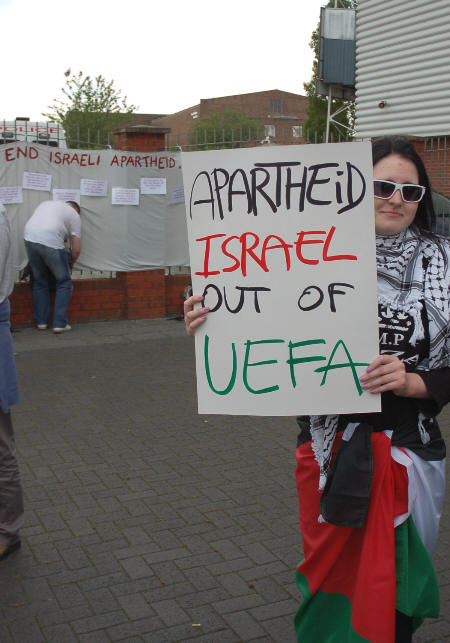 Apartheid Israel out of UEFA! 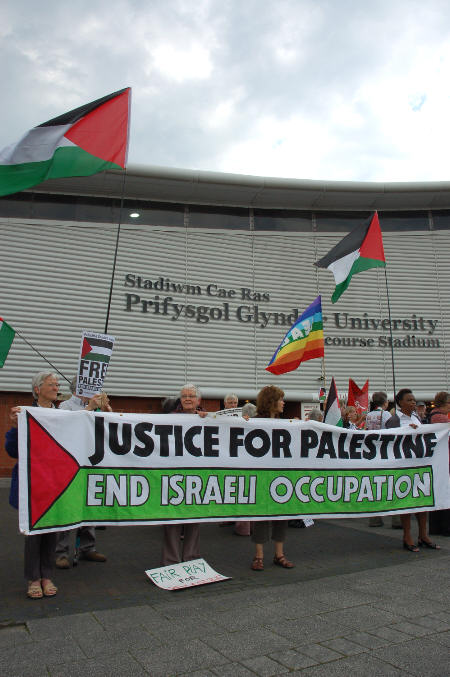 Banner in front of the Racecourse ground, now owned by the Uni 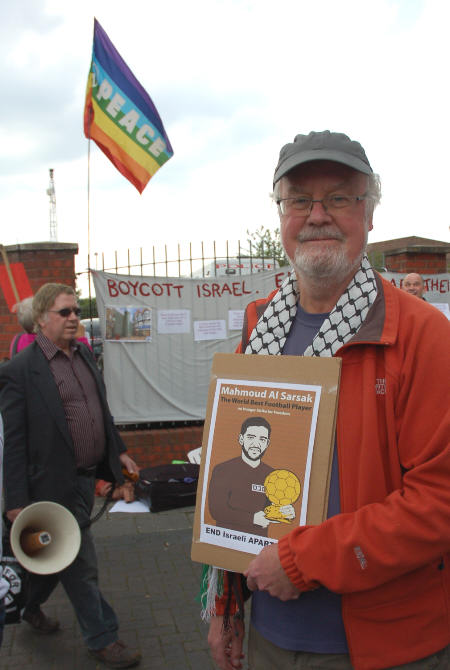 A placard for Mahmoud al Sarsak

Call out for the protest
WPJF article

Other reports from the protest

In this photo report of those ejected from inside the ground, I estimated around 30-40 people protesting the game, but I didn't actually count them. Stillshooter reckons 50, while the abysmal report in the Daily Post referred only to "20 women". One can only speculate at the reasons for this slant on the facts, but the photos speak for themselves. There was also a report and photo on the wrexham.com site, while the BBC - who definitely received press releases - have apparently failed to report the protest at all so far online.

A variety of groups involved

Protest inside and out

Although most people stayed outside the ground holding banners, chanting, handing out flyers and engaging with punters, some activists gained entry. Others were refused - security were (selectively) asking to look in bags and one woman was prevented from using her free ticket for the match after a pro-Palestine sticker was found on her mobile phone. However, while she was arguing with security, others walked through unchallenged. Inside the ground there was an attempted pitch invasion, some people managed to wave flags and express their opposition loudly before being removed, while one man was thrown out merely for revealing his Palestine football shirt. The would-be streaker didn't make it into the ground, unfortunately. Undeterred by one ejection, a couple of women went round the back of the stadium and gained entry to 'the Kop' via student accommodation recently built on the stadium car park (Glyndŵr University are the new owners of the Racecourse, or rather a subsidiary called Glyndŵr Innovations Ltd., the 'delivering business solutions' arm of what was once an establishment devoted to education). The activists unfurled their flags in a prime position facing the fans and right behind the media and made enough noise to be heard clearly inside the pub at the other side of the ground. Photos here.

Although the main demonstration outside the ground wound up at around 6.30pm, some activists stayed around and engaged with people leaving the ground after the match, which ended in a 5-nil victory for Wales.