Birmingham Tenants & Homeless Action Group have occupied an abandoned council house with the intention of handing it over to a homeless person. They've contacted the council and demanded that they put the property back into use as low cost social housing and then do the same with the other nearly 12,000 empty properties around the city. Otherwise they have said that despite changes to the law on squatting they will continue with occupations of the other empty properties with the intention of handing them over to the homeless. With 11,924 empty properties, the highest rate of homelessness in the country and an estimate by city planners that Birmingham is currently short of 11,000 affordable homes, putting the abandoned houses back into use is the only logical step 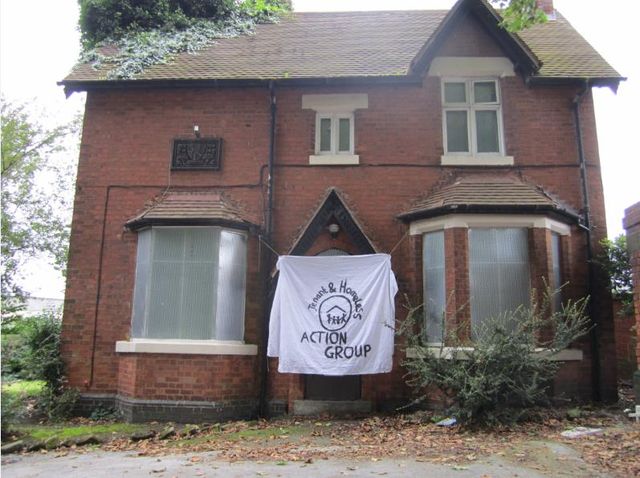 On Sunday 26th August Birmingham Food not Bombs reported after their weekly food distribution that the number of homeless attending the distribution had dropped from 30 to less than 10. They discovered that the police had been following them around and arresting them for begging, with one person reporting six of his friends being arrested in total that week. This was all part of an ongoing operation by West Midlands Police that started back in June to crack down on begging in Birmingham city centre. At the time the group criticised the action of the police saying

"Harassing and arresting the homeless for begging is counter-productive; time in prison only makes the homeless less employable and more marginalised."

A few days before this incident the group had posted a report detailing the housing crises that is currently affecting the country’s second city which has the highest rate of homelessness in the country and has increased by 25% since 2009. During that same period spending on homelessness decreased by 29% with many shelters and charities struggling to cope. City planners estimate Birmingham is currently short of 11,000 affordable homes but this is set to rise to 70,000 short by 2026. On top of all this the situation is set to get a lot worse as changes to housing benefit start to have an effect. In Birmingham 34,500 housing benefit claimants will be chasing 23,000 low-cost houses. That’s 11,500 people who could end up without a home. In July this year the government declared that many of Birmingham’s families would lose around 20% of their council tax relief. This will add between £200-£500 per year to many household expenses. With rent in the private sector continuing to increase inevitably those struggling to pay the rent will find themselves facing eviction. The final ingredient to this cocktail is that from the 1st September squatting in residential properties is set to become illegal as Section 144 of the Legal Aid, Sentencing and Punishment of Offenders Act 2012 comes into effect. For many people squatting is the only way to ensure they have a roof over their heads, the new law wont stop everyone from squatting, all it will do is further victimise society's most vulnerable by giving them a criminal record, or condemn them to a life on the streets. The government ignored its own consultation in which 95% of responses didn’t want to see any action taken on squatting and all debates in parliament on the proposed changes where held so late that real debate never happened. The new law will cost the taxpayer £790 million in the first 5 years

That mean taxpayers will be paying £790 million to fund the enforcement a law that keeps the homeless on the streets where many of them will die, the average life expectancy of people living of the street is just 47, 30 years shorter than the average population.

In light of this activists from Food not Bombs, Birmingham Eviction Resistance Network and other grass-roots groups formed the Birmingham Tenants and Homelessness Action Group. In the early hours of Monday 27th the group seized one of Birmingham’s 11,000 empty properties. The group is doing up the property to hand over to a homeless person. They say the council, which owns the property, should put it back into use immediately as social housing. They have vowed to defend the property and its resident and will take the council to court if they apply for an eviction. In court they will demand that the council take over operation of the house, add it to their council housing stock and allow its resident to stay. If that fails they have promised to resist any bailiffs should they be sent to evict the resident. Although they would prefer the council to use the money that would otherwise be spent on trying to evict them on sorting out the city’s housing crisis.

John Holland, 25, said “A roof over your head should be a right. Over 11,000 houses are lying empty; – this place mustn’t be left empty when it could house a family.”

There are over 11,000 empty homes in Birmingham 2.8% of the entire property stock and even more abandoned land. The group is demanding that the council seize as many of these abandoned houses as possible and put them back into use as low cost social housing. The group has vowed that until that happens and despite changes to the law regarding squatting they will continue to seize the properties and put them back into use themselves.