Campaigners are hoping to kick-start opposition to 'hundreds of new roads' with actions in Twyford Down and Hastings this weekend.

Government and local councils are planning to spend billions of pounds on dozens of new roads over the next few years, and new 'growth' funds and devolved spending powers for local councils threaten to add hundreds more disastrous projects to this list.

In the 1990s, what was in effect a popular uprising [ 1 | 2 | 3 ] brought Tory plans for ‘the greatest road-building programme since the Romans’ to a screeching halt.

Could this weekend's actions be the beginning of a new upsurge of anti-roads protests? 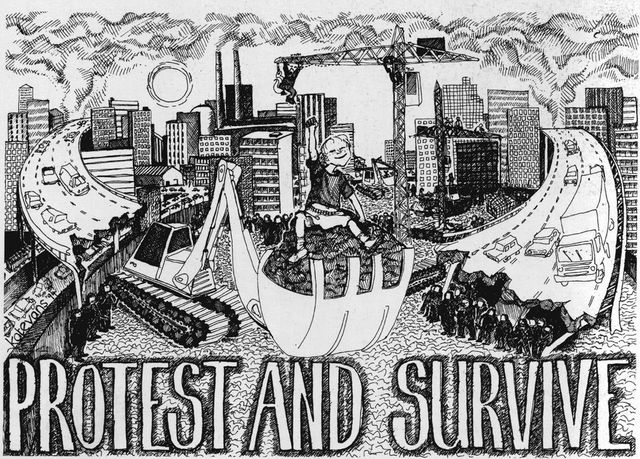 Twenty years ago, in 1992, protests at Twyford Down helped light the fuse of the modern environmental direct action protest movement, and hundreds of campaigners - old and new - will be gathering there this Saturday (29 September) to protest against the new schemes.

At the same time, activists in East Sussex will also be staging a two-day Camp and Rally this weekend in the Combe Haven Valley outside Hastings, threatened by a £100m road, work on which is planned to start in the new year. The Camp will include direct action training and renowned transport campaigner John Stewart will lead a workshop on 'How to stop a road'.

Of the 45 transport schemes approved in the budget by the Department of Transport, the Bexhill-Hastings Link Road (BHLR) is the worst in terms of carbon emissions.

Abby Nicol, a spokesperson for the Combe Haven Defenders, who are organising the Camp near Hastings, said:

Run-away climate change is one of the greatest threats we face. Yet the government are sponsoring a new wave of road-building across the country, using money that would be much better spent on improving public transport. We urge people to join us this weekend to see the amazing area that will be destroyed unless we take action to stop it, and to learn about practical ways in which we can all peacefully and effectively resist the construction of this road.

A major conference of local anti-road groups is due to take place in Birmingham in November.