Anarchist movement grows in Cardiff after month of resistance

The month began with the successful eviction resistance of the squatted social centre Gremlin Alley on October 4th, when bailiffs turned up faced with a barricaded building and a supportive crowd outside, eventually realising they had no hope of gaining access. The gremlins occupying the centre spent the rest of the day having a black bloc style party on the roof, while supporters partied to a local band who turned up to play, and cops kept their distance but remained present for most of the day. A communique followed the next day, expressing solidarity with imprisoned squatter Alex Haigh and the Cuts Cafe crew in London who were raided by TSG on the same evening. A video commmunique was then released the following week, in English and Welsh, explaining the reason for resisting, as well as expressing general disgust for the state and the increased criminalisation of homeless.

After a busy two weeks improving barricades by gremlins and supporters, the first attempt to deport the Saleh family occured on Thursday 18th, with their home being raided by UKBA officers and two activists being arrested for obstruction. While solidarity was shown for the activists at Cardiff Bay police station, others made an attempt to block the detainees coach on the motorway sliproad, followed by a successful communications blockade of Egypt Air’s telephone lines and their facebook page. The family avoided deportation that day due to a security mix-up, and were instead taken to Cedars detention centre in West Sussex. By the morning, Friday 18th, UKBA offices in Cardiff had its windows smashed – no doubt in response to the attempted deportation, signifying more resistance to come. 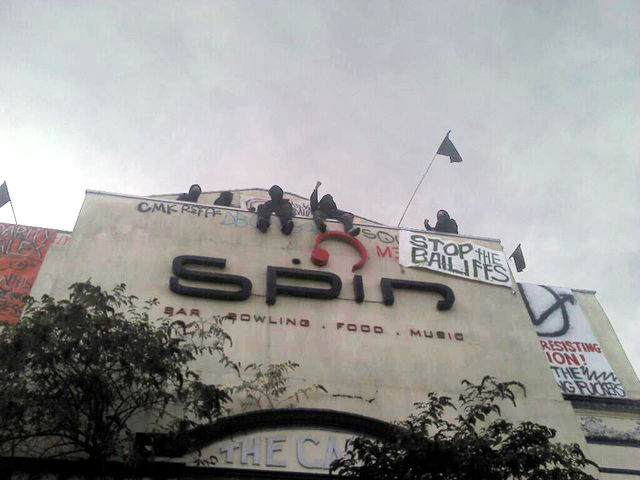 For the next scheduled flight, on Wednesday 24th, a massive police operation (see video) ensued, spreading the resistance to England and causing one person’s hospitalisation by cops and many others sustaining injuries. One activist however managed to d-lock themselves to the detainees bus, within the compound of Cedars detention centre, successfully delaying it for 5 hours, before being cut off and arrested. The next morning, after the family had been deported back to Egypt, UKBA offices (again in Cardiff) received more broken windows and slogans spray-painted "No Borders" and in Welsh "Dim Ffiniau". Days later on the Saturday a march from Queen Street to UKBA offices on Newport Road took place (which still had smashed windows and graffiti), attended by 50 supporters of the family, who leafleted passers by to raise awareness of the gross injustice the family had received.

Since these inspiring and emotional weeks of resistance, Cardiff Anarchist Black Cross has re-surfaced to support and show solidarity with prisoners, hosting their first event – a Prisoner Art Exhibition, as part of a UK tour. Additionally, Cardiff Defendant Solidarity has now emerged, to support and aid current and future Cardiff arrestees and defendants, alongside organising a Legal Observer Training evening in response to recent (and no doubt future) events. This comes as the Red & Black Umbrella, celebrates it’s first anniversary as a squatted anarchist social centre, with a benefit gig for various local activist groups, while Gremlin Alley Social Centre continues to avoid eviction.

While the Saleh family are extremely grateful for all the solidarity and support shown, we wish to make it clear that some of the actions mentioned above are actions of individuals and not of the campaign.
We hope to work peacefully together to bring the family home.