Another set of reports and tweets from this week's hearing in which the defence is calling for all charges against Bradley Manning to be dropped on account of the mistreatment he suffered at Quantico Brig until his eventual transfer to Fort Leavenworth in April 2011. These links and quotes are mainly from 30 November, when Brad faced cross examination on his testimony. See also this previous post with links to earlier reports from the hearing. 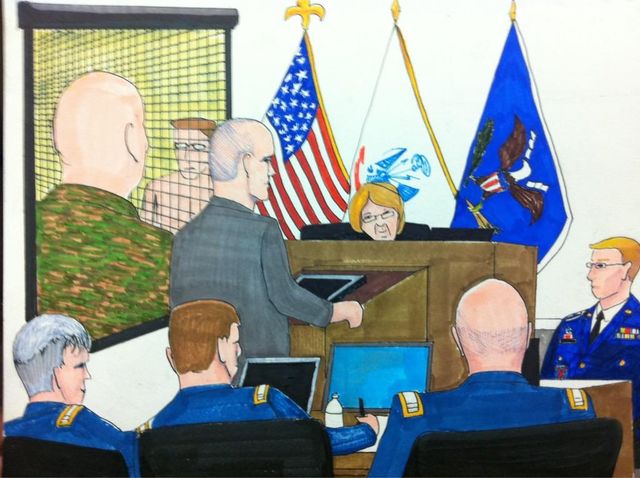 ”However, Manning filed several grievance forms, and whenever he handed them to guards by hand, they seemed to disappear.”

”Recess amid gov cross-examination of Manning, reminding that in Army-written reports he frequently reported good treatment from guards.”

”Oltman wasn't at the brig as often as Blenis, but Oltman said Brad would stay on POI indefinitely regardless of Dr reviews”

”Bradley Manning: 'Didn’t want anyone to get targeted for being associated in any way or form with me'.”

”Bradley Manning on the chaplain meeting detainees at Quantico: 'I’m not a religious person so I don’t need prayers'.”

”#Manning said did not discussed case or treatment at visits b/c visits were recorded, and because he dealt with matters through counsel."

”When MAJ Fein asked which of 2 officers reporting on his conditions to his current Army command 'were the best' #Manning said, 'both'.”

”Especially noteworthy #Manning testimony is respectful, even deferential to Armed Services, his Quantico guards, his command, other soldiers”

”Bradley #Manning is funny and charming (and even disarming to even MAJ Fein USG prosecutor.) Earnest is the best word, and confident too.”

”Short break for #Manning from prosecution X-exam. He's been describing being ordered to fill out 'voluntary' statements”

”#Manning still testifying about treatment in Quantico, deprived of all clothing and his glasses after being put on suicide watch”

”#Manning was a little nervous and clipped at first, but quickly became relaxed, smiling frequently, even laughing. Looked healthy”

”#Manning donned the suicide smock to show how odd, bulky, uncomfortable. became stuck in it once, needed assistance”

"Today, revealed that author of couplets was the brig's Judge Advocate General, Lt. Col. Greer... (2 of 3)"

"Yesterday, revealed that Quantico staffer sent email parody of "Green Eggs and Ham" about guards taking away #Manning's underwear. (1 of ?)"

"Quantico chief: #Manning should have been held there 90 days max, not 9 mths..."

GLENN GREENWALD (at the Guardian)

30 Nov: Bradley Manning – A tale of liberty lost in America