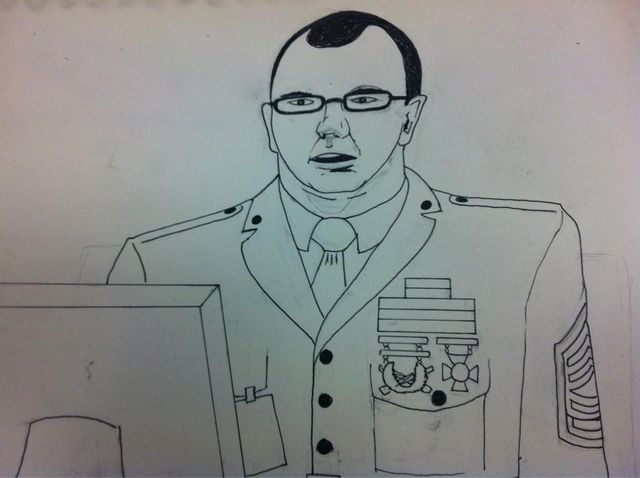 The mainstream media has until now covered this case extremely poorly or not at all despite (or perhaps because of) its huge importance. There have been more mainstream journalists present at this hearing, presumably because Brad was going to be giving evidence in person, but many mainstream outlets are not sending their own reporters. Bradley Manning took the witness stand for the first time in his two and a half year pretrial detention on Thursday and Friday 29 and 30 November.

These articles are an attempt to collect together some of the work of the (mainly) non-mainstream journalists reporting from court.

This section covers 1 & 2 December. Collections of reports and tweets from earlier in this hearing can be found here and here.

Under each author, articles or websites are listed, followed in some cases by a selection of their tweets (most recent first).

2 Dec: Pressured from above, Quantico counselors fail to advocate for Bradley Manning

"An example of the way Quantico logic works: Manning was allowed to speak to the detainees in the cells next to him...but those were empty."

"BTW: since he was on MAX custody, every time Bradley Manning left his cell in Quantico, the entire brig was in 'lockdown'."

"Shortly after Manning left Quantico, the brig changed its policy to allow POI detainees to be on medium security, instead of isolating MAX."

"Manning's only 'advocate' at Quantico was joking about his gender, preventing him from receiving a birthday present, and keeping him on POI."

"Correction -- Papakie was telling Blenis to take Manning's 'panties' *away* just before bed, and no sooner. "

"After Manning had underwear removed, & was forced to stand naked at attention, SGT Papakie emailed Blenis to give Manning his 'panties' back"

"Manning had sent a letter from Quantico under the name Breanna. Blenis said "that's not normal," & it was a factor in his POI recommendation"

"Manning told Blenis that the package was for his b-day 4 days later. Blenis then decided to reject it. Confirmed 'we felt like being dicks'."

"Blenis on why Quantico rejected what was probably a birthday package to Bradley Manning: 'we felt like being dicks'."

"Absurd. Essentially: 'If he'd only chatted w/ us more while we kept him in solitary confinement, we'd have treated him normally'."

"Blenis testified over and over that if Manning just communicated more, they'd have ended this treatment. Defense will cross-examine next."

"StfSgt Jordan giving inconsistent reasoning for POI. Says had long convo w/Manning about March Madness, then calls him too quiet"

"Yesterday a psychiatrist said he found him to be bright, social, and to pose no risk to himself. Quantico then told dr BM needed segregation"

"Back into court for another day of Bradley Manning's hearing. Heartbreaking to hear how Quantico officials deceived him about his treatment."

3 Dec: The Prosecution's Argument for Why it Didn't 'Unlawfully Punish' Bradley Manning

"[In video just shown in courtroom] Bradley Manning: '...I feel like facility is looking for reasons to keep me on POI status...'"

"Under oath, master sergeant just stated would sometimes refer to his underwear as 'panties' & not necessarily female term"

"Bradley Manning sent 2 letters from brig with 'Breanna' as name. MSGT. Blenis considered that as factor for POI status"

"MSGT. Blenis on higher-ups visiting Quantico while Bradley Manning was confined: Not showing up 'just for the hell of it'."

"At Quantico, while #Manning in confinement, culture supported officers making decisions on mental health which psychiatrists were to make..."

"Poor family conditions/relationships & severity of charges, which Manning couldn't do anything about, factored into decisions on confinement"

"Quantico took #Manning's underwear away, but they've him have a razor to shave."

"Blenis testified he told defense, 'Pfc. Manning was gonna remain on MAX POI until the 706 board."

"#Manning in video to Blenis: 'I don’t understand why the cont of the policy & restrictions beyond time recommended by *you* & psychiatrist'"

"'Make sure [#Manning] not standing at attn naked for eve count right before taps. U should be taking his panties right before he lays down'."

"Blenis selfdescribed 'advocate' for #Manning at Quantico emails Brig Command re turning back package for him: 'We felt like being dicks'."

"Coombs: I'll admit I have stood in front of the mirror and flexed my muscles. You've never done that? Blenis: No. [etc] (hah.)"

"GYSGT Blenis, 'I would not consider dancing exercising'."

"GYSGT Blenis 'Time we saw lawyer making complaints.' They made a log book for #Manning"

"Blenis testified that he told defense prior to Court appearance, he assumed those reports went all the way to MC HQ the Pentagon."

"#Manning had his own log book. Manning was only detainee that Brig staff had to draft weekly reports."

"Most difficult witness to nail down factors of consideration re MAX POI... and role of other Brig staff in those determinations."

"Defense suggests #Manning is highly intelligent, and had interests that were different than Brig guards."

"Brig witness says their consideration was security, then on cross Coombs nails down focused solely on pseudo psych & subjectivity."

"Def deconstruction on cross each of Brig witnesses rational[e] for MAX POI & then Suicide Risk revealing the landscape of motive."

"to contend that Brig eval of suicide not founded in what they learned in 'ACE' training, nor properly informed psychiatry"

"Brig staff testified that they viewed MAX POI as security issue, but their consideration of 'suicide' in records ground for def #Manning"

"GYSGT Fuller testified that Blenis knew the C&A reports were going to higher ups, and that Blenis communicated with Brig Commander."

"But, Blenis was reviewing mental health evals recommending removal from MAX POI, while himself on board & recommended MAX POI."

"GYSGT Fuller testified, h/w, Blenis was who filled out C&A board forms recommending MAX POI for the 2 other board members to review #Manning"

"Blenis said in a video in Court 'I wish I had a 100 Mannings' See Article 13 https://docs.google.com/file/d/0B_zC44SBaZPoQ2hLa21jNlM0WmM/edit … transcript (Scroll 'hundred Mannings')"

"GSGT Blenis consistently wrote positive notes about #Manning and Manning *thought* he had a positive rapport with Blenis."

"GSGT Fuller (C&A board) had no idea why 'serious neurosis & psychosis' checked on form, despite psych eval that asserted otherwise."

"Blenis on stand tomorrow. Weird details coming out, Blenis (as #Manning counselor) noted 'talkative' in logs, but uncommunicative to board."

"GSGT Fuller (who recommended MAX POI) said #Manning was the longest he had ever seen on MAX POI. Longest he saw was a week."

"According to Fuller testimony, recommendations for board vote were already written in by Program Chief, Gunnery SGT Blenis."

"Lance Corp. Tankersly (Quantico guard) agreed 'As detainee #Manning was average, what made him not avereage was attention from higher ups'."

"Tankersly said that although he never saw incidents described in 'logs' e.g. dancing, peek a boo...if he had would 'be normal'."

"The psych's were recommending removal from POI, however, the Brig Command disregarded their recommendations."

"#Manning had testified that he started to lose faith in his psychiatrist, because he thought they were being disingenuous, as a result."

"Gunnery Sergeant Blenis asked #Manning why his doctors had not recommended removing him from POI, when in fact they had."

"Cline testified that some guards were annoyed with the protests because would hinder them or how they needed to get home."

"Tankersly said only exception was the attention that #Manning case had & the visits from higher ups who visited the Brig in regards to."

"Both guards reaffirmed #Manning was respectful, compliant, not a flight risk, never harmed others or threat to self."

"Lance Corporal Tankersly said that in every respect #Manning behavior in cell was typical of detainee."

"Defense says #Manning was in amounted to solitary since never had detainees to left and right of him despite USG assertions otherwise."

"Both Tankersly & Cline said #Manning (any detainee) 'allowed to speak to other detainees' only 'directly left and right of cell'."

"#Manning doesn't have access to the Internet, only Intranet at Fort Leavenworth. At Quantico on MAX he was not allowed to touch electronics"

"Def has to prove intention or conditions tantamount to torture. Govt has to prove preponderance of evidence legitimate objective."

"I say 'likely,' in tweet, b/c defense motion states #Manning told Blenis he expected family to send b-day package around that time."

1 Dec: The Bradley Manning Case and Our Decade of Denial

3 Dec: Footage of presentation by David Coombs at support event for Bradley Manning. Begins with presentations by Emma Cape of BMSN and Michael Ratner of Center for Constitutional Rights. Coombs speaks from around 23:00 mins.

See also this report on bradleymanning.org and this critical analysis by Kevin Gosztola.