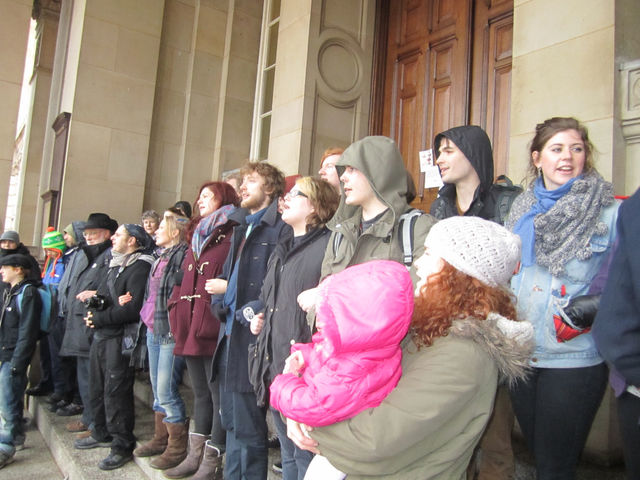 The Council have been heavily criticised for the undemocratic way in which the cuts are being forced upon the city. The public “consultation” the Council held over the budget was held over only four weeks where it was not possible to propose any resolutions. Communities Against the Cuts have described the consultation meeting as nothing other than a “sales pitches for austerity, dominated by monologues from the Council leader.” In fact at all of these meetings the Councils plans where rejected by the public who were then ignored by the Council. A planned anti-cuts meeting at the council house the day before the budget meeting organised by various groups in Birmingham to discuss alternatives to austerity was cancelled by the council for fear of protests happening inside the Council House.

Activists have vowed that this is just the start of a prolonged campaign to reverse the cuts and site a long list of previous victories as evidence that they can stop the cuts. Merrishaw Day Nursery was closed but then reopened after protests, Cotteridge Church OAP Day Centre had it's funding cut but was restored after protests, Charles House respite day care home was threatened with closure but was kept open after the parents of the children who use Charles House stormed constituency meetings and shamed their officials into backing down. Parents campaigned and stopped the West-Heath school from becoming an academy.

The average reduction in Government funding for councils as a whole is £74 per person; Birmingham’s reduction has been more than double the national average, at £149 per person. The £101m of cuts this year is part of £625m cuts to Birmingham by 2016/17 and on top of Cuts of £275 million since 2010. The £101m of cuts to be voted on include a cut of £32.7 million to the Adults and Communities budget, £23.8 million to Children Young People and Families, and £28.3 million to Leisure Services. High on the hit list are: Voluntary Sector Funding (£4.4m), Children Centres (£3m), Children Residential Care Homes (£1.6m), Children and Adolescent Mental Health Service (£1.4m), Home to School Transport (£1m), Youth Service (£0.47m) and reduced subsidy for the Meals Service (£0.4m).

Then of course there is the extra £15 extra a week many people will now have pay in bedroom-tax, the £5 a week extra that unemployed people will have to pay after losing their council tax relief. Its clear that in Birmingham, one of the most deprived areas in the country, it is the poorest who are being hit the hardest.