Once a year we are treated to the far right's shit attempt to take over Brighton. This is one antifascist's view of a good days work.

227 racists - this is the entire crowd 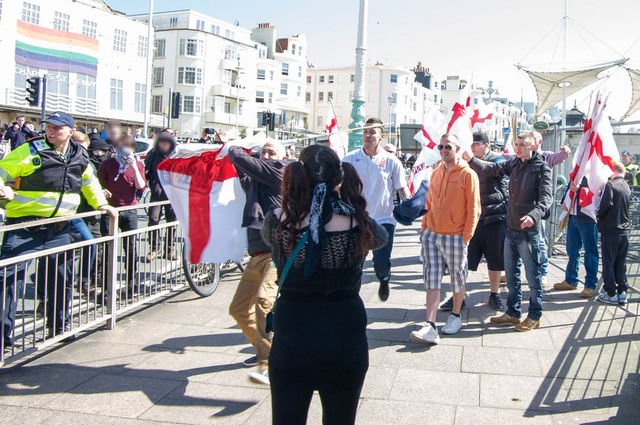 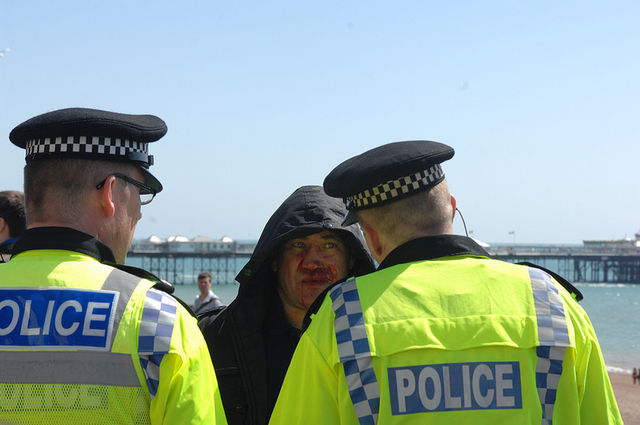 Steve Sands whines to cops - so much for ACAB eh? 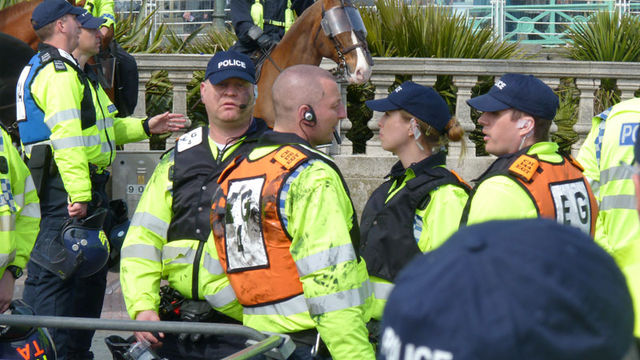 EG are not amused 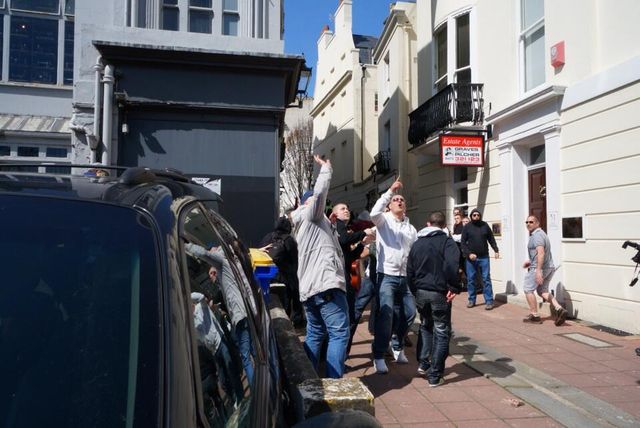 Far right fuckwits March for England (MfE) returned to Brighton once again on Sunday 21st April. While they've never been particularly welcome, in the last couple of years opposition has ratcheted up with the march successfully halted and diverted in 2012. In response police changed this year's route to a short walk on the seafront – an area much easier to seal off from the public. As a result (while laughably still claiming to go 'where they want, when they want') organisers suffered a defeat before they even got to town.

Even with many antifascists avoiding the narrow seafront pen, aerial shots show opposition outnumbered the 230 nationalists by at least 5 to 1. The policing operation was so big that Sussex plod are refusing to say how much it cost and yet, despite the largest number of police in Brighton since the Tory conferences of the eighties, all they could do is maintain a sterile area for the march itself. It was repeatedly made clear that antifascists controlled the streets elsewhere.

A splash of colour was added to the otherwise largely monochrome counter demo courtesy of the English Disco Lovers, an initally online attempt to appropriate and usurp the EDL brand. In the real world EDL activism consists of playing, singing and dancing to disco music and generally just having more fun than their racist namesakes. While I'm not convinced any of the fascists will be won over by disco, it definitely seems to annoy them that people are enjoying themselves in-spite of their presence.


'Pompey' Dave Smeeton – main organiser of MfE – was, as usual, leading his drunken rabble the few yards along the seafront they were allowed on. This year, along with his trademark flatcap and shades, Dave was sporting a South East Alliance (SEA) vest instead of his usual MfE branded gear. Whether Dave will now throw his lot in with friend and SEA leader Paul 'Pitt' Prodromou remains to be seen. Paul certainly views himself as the successor to Tommy Robinson (English Defence League leader and former far right posterboy) and was keen to prove himself in Brighton. Though his chosen method of leading a small band of nationalists towards their march pen via the counter protest was more embarrassing slapstick than heroic defeat. After a short burst of tuneless singing Paul accidentally smacked his son in the face with a stick, attacked a lone female counter protester, had his flag stolen and then hid behind cops when they eventually rescued him from a baying mob.

Once Paul had been shepherded to their heavily protected pen antifascists set about searching for other fascist who may have got lost on their way to the beach. A few had attempted to start a fight on St James Street (Brighton's gay heart and scene of far right homophobic abuse last year). Realising they'd bitten off more than they could chew the fash legged it into the Coral betting shop leaving two Evidence Gatherer cops to guard the door. With the smell of blood in the salty air antifa had it's tail up and a sustained attempt to breach the door was made as visibly terrified fascists peered out. While the EG just about managed to prevent a complete lynching before mounted backup arrived, they themselves received a fairly comprehensive repaint in the process.


Much had been made by the far right's keyboard army of Brighton's supposed mistake in resisting MfE in previous years. Apparently this time around we were going to be taught a lesson by thousands of hardcore nationalists. The fascist picket of a UAF meeting in the lead up to MfE 2013 responded to taunts about it's pathetic turnout by parroting the line that “3,000 proper football hooligans are coming to sort you out”. On the day two of those on the picket were discovered lurking on the edge of the Old Steine with some of this alleged hardcore. Unsurprisingly Liam Pinkham, Shane 'Diddyman' Calvert and a few other North West Infidel mouth-breathers attempt to infiltrate the 'reds' wasn't massively successful. Quickly identified and besieged by assorted locals and antifa the NWI was only saved by mounted police. Though even this wasn't enough to stop a number of missiles making contact, with at least a couple of chunks of masonry and an egg being bounced off their noggins. They then surrendered and fled, pursued by a number of queer lefty vegans.
At one point a number of local fash, including local Nazi celebrity Steve 'Sugar-Plum' Sands, launched an ill fated attack on some antifa. A frank exchange of views resulted in Steven's already rather worn visage receiving a long overdue boot. Unfortunately for Steve's face his day didn't get much better, as a mass brawl later in the day apparently saw his politics robustly challenged once again.
The Combined Ex-Forces (CxF – fascists who pretend they used to be soldiers) also made something of a cameo appearance. Having come all the way from Liverpool they obviously weren't content with a short walk on the seafront. About 10 of them were eventually allowed out at the end of the march and they attempted to sneak into town. They didn't make it far though, as people began to realise what they were upto they were quickly surrounded at the war memorial. Apparently unaware of the irony of a bunch of pretend soldiers disrespecting a memorial to real soldiers, CxFers swigged foreign lager and swore at locals until enough police arrived to escort to safety.

By around 6pm most of the major action was over (though small scuffles and occasional ding-dongs continued into the night) so antifascists retired to the Prince Albert for a well earned pint. Others headed up to Hollingbury custody suite to support arrestees.

Even the most deluded fascist monkey would struggle to see this years march as a victory. This was supposed to be the 'big one', an absolutely must attend event to teach the commies a lesson. While the hardcore travelled from across the country, there were almost as many groups as people. So far they've been uncharacteristically quiet, with some of the most optimistic claiming they stood their ground against superior numbers, photo and video evidence suggests otherwise.

Like a dog returning to its vomit, MfE are already saying they'll be back next year. In truth they are left with little option as the only alternative is officially surrendering. Same again next year then, only with even more of us and even less of them. Should be fun, but in the meantime we need to drive home the point, outnumber, outfox and outfight them everywhere. 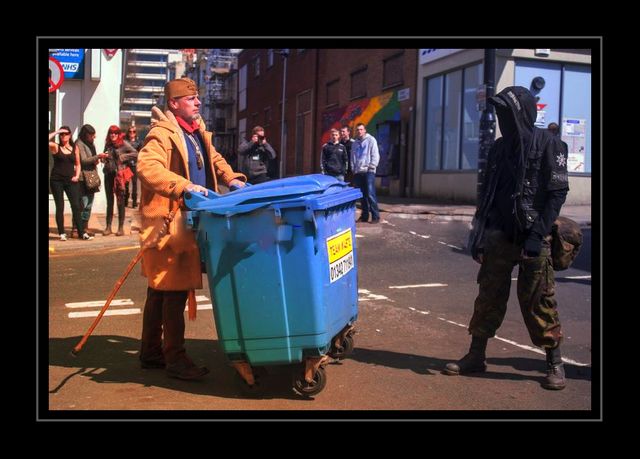 A Brighton resident protects a bin from an Anarchist, 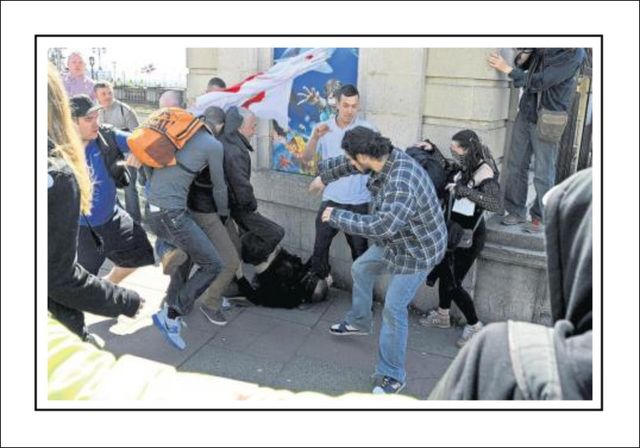 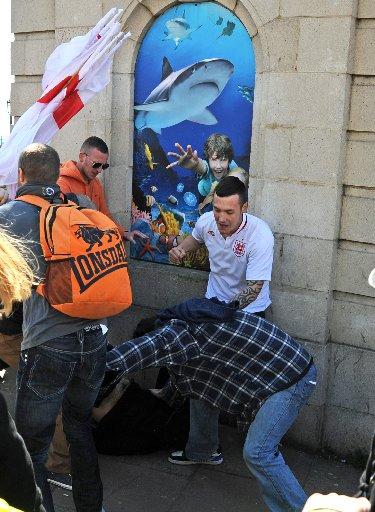 Cant say i trust the accuracy of all this...liam pinkham was def not inBrighton. Pictures on the net show him at another event in the north west this weekend.

Hmmm, you may have a point there. Got any links to these pictures? While I definitely saw Calvert shitting himself I only saw the back of the person I thought was Pinkham as he legged it away. So I might have that one wrong.

If that's the only thing I got wrong I don't think that's too bad, pretty sure of the accuracy of everything else.

I didn't realise at the time but little Stevie 'Sugar Plum Fairy' Sands also got nicked and charged with affray after his second scuffle. Almost feel sorry for the nazi twat - I dunno if it was him seen legging it from Hollingbury Police Station to avoid antifascist arrest support, if it was I'm sure they'd have given him a lift if he'd asked.

true, but who actually gives a fuck about liam whoever? 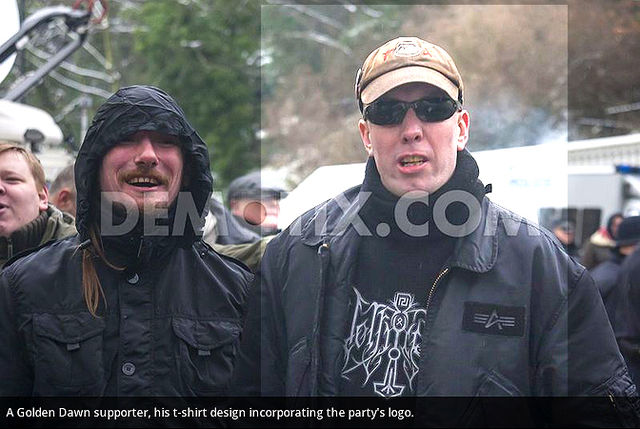 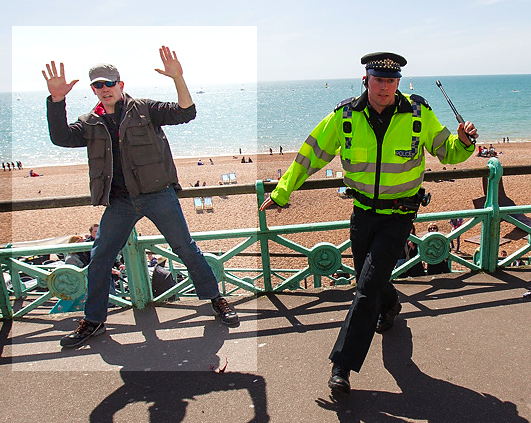 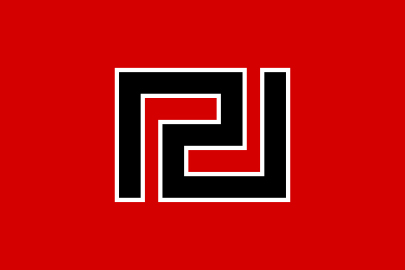 The first photo shows UK Nazis attending the pitifully under-attended demo in support of the Greek Nazi party Golden Dawn, outside the Greek Embassy in London, Jan 2013. Note the guy with the shades, brown baseball cap, and T-shirt featuring the Golden Dawn logo (and various runic symbols that have been adopted by Nazis)

The second photo shows the same Nazi "surrendering" during the March for England demo in Brighton. 3rd image is the Golden Dawn logo for visual reference

March for England supporters promise "Blood will Spill" in Brighton -

Looks like the paid disrupter Eddie Stanton is grassing up the poor sods he conned into joining his Golden Dawn honeytrap.He didnt have the bottle to come down Brighton himself but it hasnt stopped him identifying people from the many photos his red journalist mates took.Just like he did after the Nutzi do in Swansea.Some nutzis never learn.

His name is Stampton, Eddie Stampton. And you are wright he is a paid disrupter, he is loathed throughout the right wing in the UK for the splits, arguments and paranoia that he deliberately spreads. The authorities ignore his involvement with cocaine and his violence because he so good at wrecking things.
The fact that the state is willing to use vermin such as this man shows you alot about their moral compass.

Stanton really is a lowelife parasite, exactly the type special branch and red journalists love to use.He has no morals, no shame, no guilt,no mates, a women beater,he's greedy,never works,milks the taxepayer with fraudelent sick claims, a sexual deviant, a drug user of the lowest type! i could go on.After a stint arslicking around the EDL leadership and being a born again zionist and lover of all things Jewish and Israel, he has now reinvented himself as a super nutzi,A nutzi who hates jews yet was in a relationship with a jewish lass, anti muslim yet went out with an Egyptian bird, anti gay yet has sex with gay men even being jailed for robbing them after sexual activity.Tries to sell badges to loyalists despite being anti loyalist and pro republican.Against pedophiles yet talks about having anal sex with a young girl on the internet .Hates reds yet constantly is in contact with red journalists selling information and grassing up meetings and redirection points,getting people nicked in the process and putting names to faces on antifa sites,just as he did when he came here to Wales for the Swansea March/gig.What do you think he's upto when he's throwing money around, buying drinks,offering charlie,paying for travel,sending a few crumbs to pows in jail from his fake pow fund? hes tring to worm in to the next victim/host where the cycle starts again.Just do the maths and dont let him get into you.As for violence pmsl ,the only violence he's into is against women and gay men in a state of undress.A man of many aliases but we believe his legal name is Stanton. EDDIE STANTON =GOBSHITE

His name is EDDIE STAMPTON, I know him from before he went to prison for stabbing a homosexual. Stanton is an alias.