RAGE AGAINST THE BORING MACHINE

Come to act in solidarity with the campaign in Mayo against Shell’s Corrib Gas Project. For over 12 years, the local community have been resisting Shell's plans to force through a high pressure raw gas pipeline and inland refinery. Local people have gone through all possible channels to fight the project.

Let down by the Government; many have been beaten, imprisoned and feel under siege by the security and police. However people continue to protest in order to protect their families, livelihoods and resources. Currently Shell are attempting to tunnel under an EU 'protected' estuary with their tunnel boring machine but they are experiencing major construction problems. If they are having difficulties without protests, imagine how much havoc a little more disruption will cause. Rossport is the frontline of the resistance to ‘Extreme Energy’ extraction in Ireland.

Hot on the heels of the anti-G8 protests, we warmly invite old and new faces to come join us for a week of action against Shell's disastrous project.

If you are new to taking action don’t worry - all kinds of skills and roles are needed during the week of action and you will be able to play a role that you are comfortable with. If you know the area and have ideas for action - get prepared and come with an affinity group if possible. 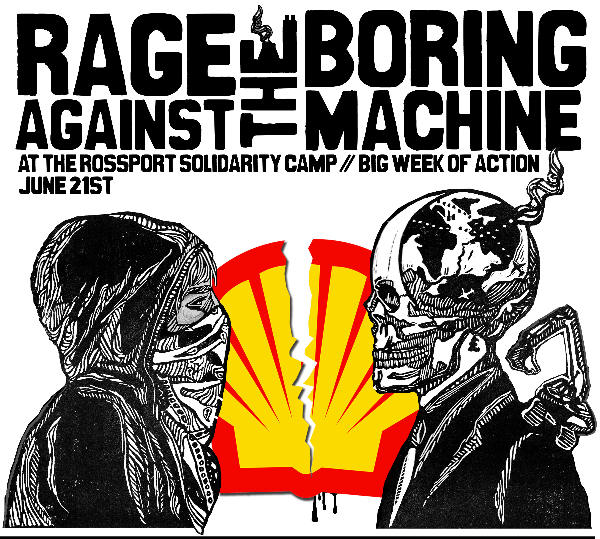 History of the campaign - The story so far

The campaign against Shell’s inland refinery and high-pressure pipeline, the ‘Corrib gas project’ near Rossport in Co Mayo has been long and extraordinary. It began in the year 2000 when a plan was announced to build an inland gas refinery and a 9km ultra-high pressure raw gas pipeline through several villages. In 2005 the imprisonment of five local men who became known as ‘the Rossport Five’ brought the campaign to national and international attention. Residents launched a national campaign called Shell to Sea in early 2005, demanding that the gas be processed offshore away from communities. Local residents and their allies continue to oppose the threat to local health and safety as well as highlighting human rights concerns, environmental damage and economic injustice. Over the 13 years of resistance so far, tactics have ranged from High Court actions, planning objections and lobbying politicians to grassroots campaigning, civil disobedience and direct action. Through a combination of these tactics the community and their supporters have delayed Shell’s project for 10 years to date and more than tripled the cost of the project to over €3 billion. Over the past eight years thousands of people have come to the area to lend their support - for days, weeks and years. Rossport Solidarity Camp was set up in 2005 and since then has hosted people from around Ireland and the world seeking to learn about and support the struggle. This week of action is hosted by Rossport Solidarity Camp.

For a good timeline of the campaign see this previous Rossport Indymedia Feature.

In January 2013, Shell began a 5km-long tunnel through Sruwaddacon estuary, a Special Area of Conservation which they plan to use for their onshore raw gas pipeline. Shell now says the project will be completed in 2015. At the time of writing, Shell are experiencing very serious difficulties in attempting to tunnel through the subsoil underlying the estuary. Shell have also begun laying the other sections of the onshore pipeline and are also building a valve station at Glengad. The project still has no community consent, and has only got this far because Gardaí and private security are occupying the area. Local experience of this occupation can be viewed here.

The tunnel boring machine, insultingly named Fionnuala (an Irish mythological legend) and painted in the Co. Mayo colours, has faced problems since its arrival in July 2012 which was met with stiff resistance [ 1 | 2 ].

Shell's dodgy construction headache is not limited to the pipeline. Just last week, a Shell worker accidentally cut one of the gas pipes on the refinery. The refinery was completed back in 2010 and has just been left to rust due to all the other delays. Shell are currently having to replace all the water pipes on site due to corrosion.

Protests are still ongoing but the focus is on the week of action in June.

Week of action Friday 21st to Sunday 30th of June

Whether you have been always meaning to visit or have been a regular over the years, this week is the time to come.

Programme for the Week:

The events planned include:

* Update on the Shell Corrib Gas Project
* Talk by local community members the campaign and current situation.
* Legal Workshop - practical information about laws, dealing with the Gardaí, Courts.
* Action planning meetings.
* Actions to disrupt Corrib Gas Project, including disrupting Shell truck movements which are necessary for tunnelling.
* Solidarity events with the local community.
* Discussion on maintaining solidarity in the future.

Check here for the full programme.

* Get you & your mates ready to come over in June

* Put on a film night/talk/fundraiser for Rossport

* Help spread the word: put up posters online, in your city and everywhere else.

* We need help building the camp from 1st June. No experience or skills necessary, all welcome.

The best way is to get a rail & sail from Britain to Dublin/Belfast/Ballina. This is a walk on fare that you can get from any train station in the UK & includes the ferry. See nationalrail.co.uk. It costs about £35 to Dublin, £52 to Ballina (single) but varies depending on times you're travelling. Or you can just go to Dublin/Belfast & then hitch or get a Bus Eireann. Bikes can go on trains & buses in Ireland but you are meant to pay about 10 euros. The camp is about 35 miles from Ballina. There is one bus a day at 5.15pm from Dunnes Stores in Ballina. They will usually drop you off at camp. It's a minibus called McGraths & costs about 10 euros. Hitching is really easy - check here for directions.

The camp is run by everyone mucking in. We ask 25 euros a week donation towards food & running costs. No-one will be turned away however because of lack of funds. There are rotas for cooking & washing up & various site maintenance jobs. Meetings are run by consensus & actions are planned by everyone who wants to be involved. There is always loads to do taking direct action against Shell, maintaining & building things for the camp, legal work, painting banners, gardening, cooking, writing articles, meeting local activists etc. People of all ages, skills, interests and abilities are invited to get involved in this inspiring community led campaign. The camp has a no illegal drugs policy at all times & no alcohol except for friday & saturday night. The camp also has a safe space policy. Please read our website for more information.

Because of the G8 in nearby Fermanagh, it is possible that the UK police or Irish Gardai will stop you at the ferry port. Be prepared to face questions on where you are heading -there's no law against going on holiday in Ireland!

For legal information about rossport read the legal page of our website.