Only a short distance from the part of London where British National Party events steward David Copeland exploded the nail-bomb which killed three innocent (and, as it happens, ethnically white) people in Soho in 1999, today, on the 1st June 2013, the BNP assembled in nearby Westminster, in the pretense of protesting against "hate preachers" (of course, if the BNP were really concerned about "hate preachers", they would have been protesting against themselves) - 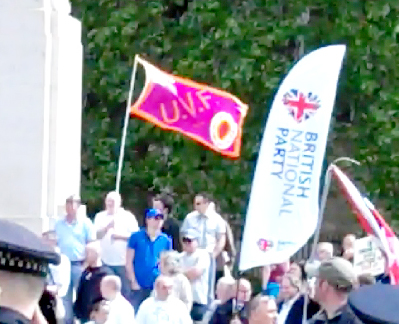 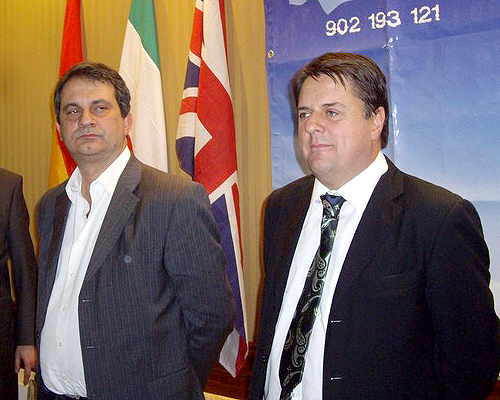 Only a short distance from the part of London where British National Party events steward David Copeland exploded the nail-bomb which killed 3 innocent (and, as it happens, ethnically white) people in Soho in 1999, today, on the 1st June 2013, the BNP assembled in nearby Westminster, in the pretense of protesting against "Hate Preachers" (of course, if the BNP were really concerned about hate preachers, they would have been protesting against themselves). After the catastrophic electoral and organisational collapse that the BNP suffered in recent years (which occurred largely thanks to sustained Anti-Fascist campaigning), the BNP hoped to use this demo to re-launch their wounded organisation. Instead their national demo struggled to attract at best perhaps 60 Fascists, with BNP supporters almost outnumbered by the (mostly left-wing) press photographers who also occupied the police-designated BNP enclosure.

Outside the police pen the BNP were opposed by hundreds of Anti-Fascists, who successfully prevented the BNP from marching, at all, let alone to Whitehall. Inside the pen, with a level of stupidity that could only come from people who are thick enough not to realise Fascism can't ever be "patriotic", the BNP flew the flag of sectarian terrorists the UVF - clearly demonstrating their own involvement in the preaching of hatred. In the 1st photo we see the flags of the BNP (white background) and UVF (violet-pink background), with their letters reversed as the flags were blown backwards by the wind (in the 2nd photo we see the same image flipped left-to-right, so the words "British National Party" and letters "UVF" can be read more clearly).

As a measure of just what BNP support for UVF terrorism represents, on the 17th May 1974 car bombs were detonated in Monaghan and in Dublin which killed 33 civilians and wounded nearly 300 more. No warnings were given, most of the victims were young women, and (as with the David Copeland bombings) one of the victims was an unborn baby. It took the UVF 19 years to find the courage to admit they'd been responsible for these murders, but, undeterred, in the same year the UVF admitted responsibility, on the 18th of June 1994, the UVF attacked a pub in Loughinisland, County Down, murdering 6 civilians and wounding 5 more. The attack was carried out in retaliation for equally vicious and brutal IRA murders, murders to which none of this attack's victims had any connection. In the UVF's 30-year career of terrorist butchery, they killed over 480 people, more than two-thirds of whom were innocent civilians.

If you're wondering whether the BNP's relationship with hate preachers is some kind of isolated incident, when BNP chairman Nick Griffin was leader of the NF, Nick Griffin supported Libyan dictator Colonel Gaddafi, who sponsored the murder of 270 innocent people in the Lockerbie plane bombing. Nick Griffin travelled to Libya seeking financial support from the Muslim dictator, and returned to the UK with hundreds of copies of the "Green Book", in which the Muslim dictator expounded his political philosophy, which, despite failing to secure any funding, Griffin still circulated to NF activists and to members of the public. Finally, Nick Griffin's business partner and closest long-term political ally is an Italian Fascist called Roberto Fiore - an ex-member of a Nazi group called the Armed Revolutionary Nuclei, who killed 85 people, including 2 British tourists, and injured 200, when they blew up Bologna railway station in 1980. Having been convicted in-absentia for membership of a banned terror cell, Roberto Fiore escaped arrest by hiding-out in London until his conviction lapsed, in the flat that Fiore shared with Nick Griffin.