On the final leg of my five day Bradley Manning solidarity tour of Bristol and south Wales, I headed west from Cardiff early Sunday morning, through Carmarthen and on to Haverfordwest, where members of Bradley's family still live. My aim was to have a solidarity presence in Haverfordwest as Brad's trial begins in the US. See previous reports from: Bristol | Bristol/Cardiff. This report covers Sun 2 and Mon 3 June, with a few photos of banners etc. to illustrate. 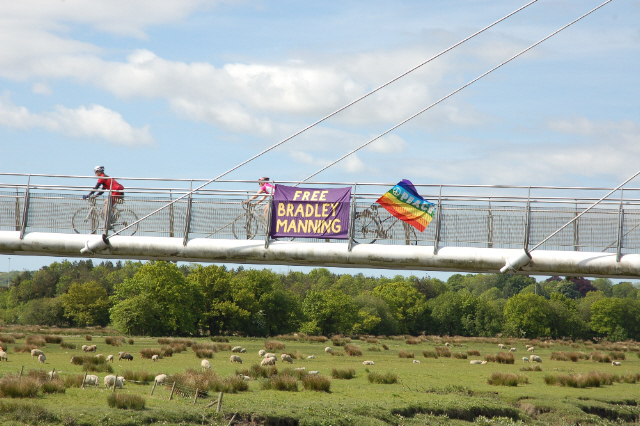 banner on the foot/bike bridge in carmarthen 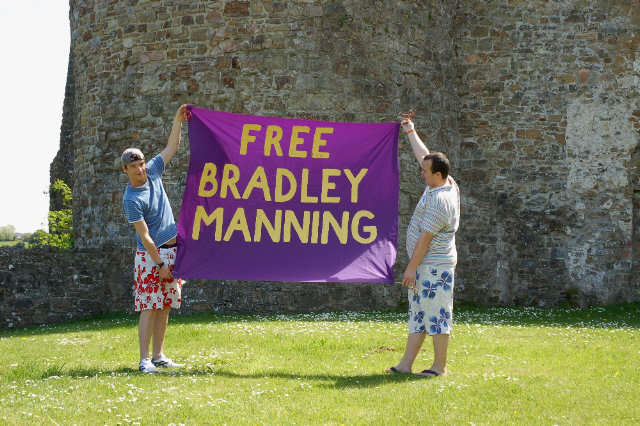 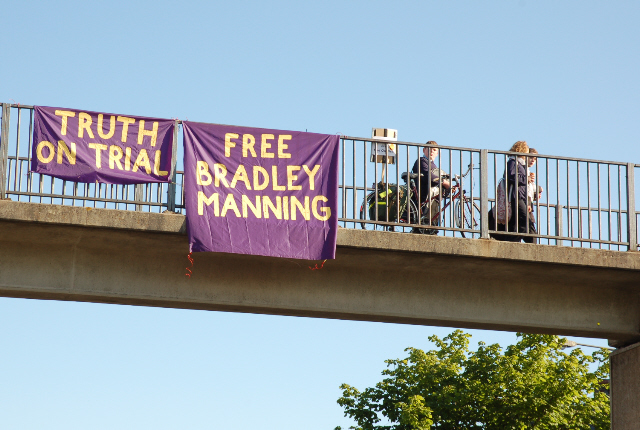 schoolkids get the message 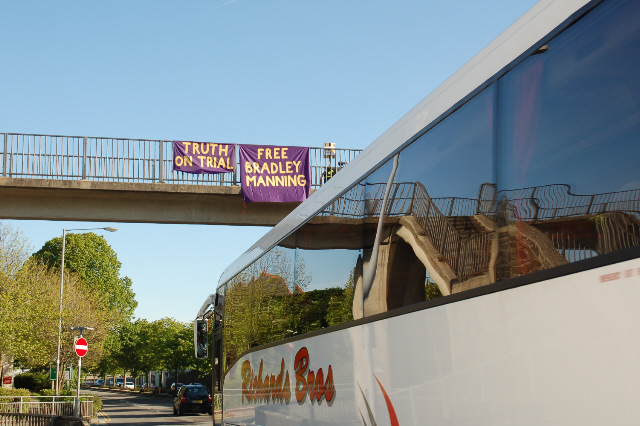 bus under the bridge 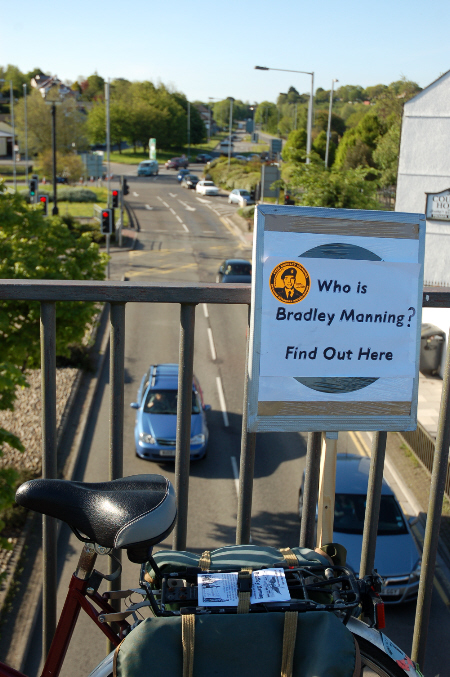 view from the bridge 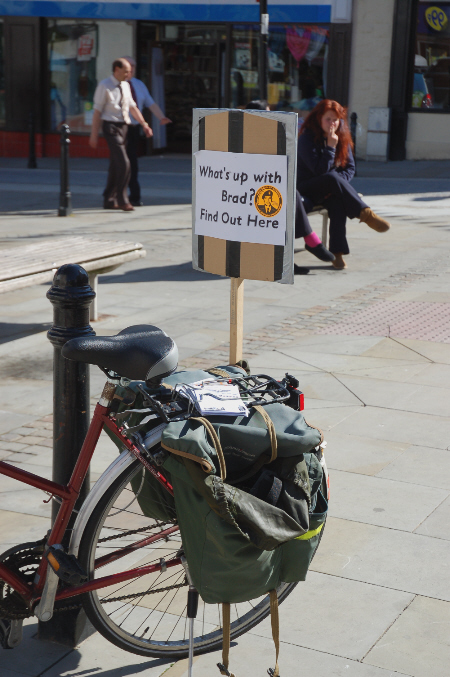 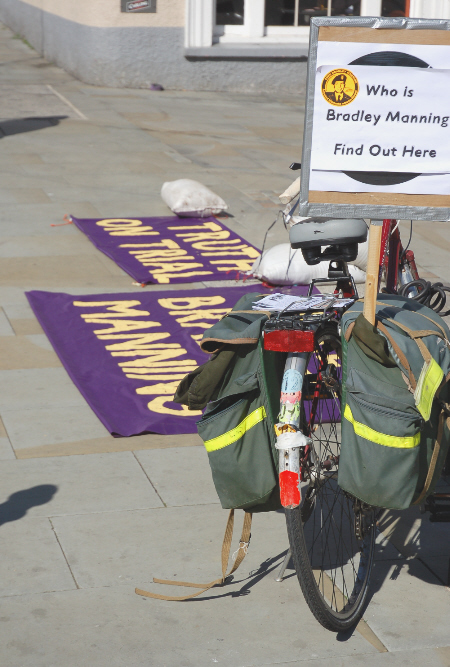 banners on the pavement

Arriving in Carmarthen before 10am the town was still asleep so I just put up one of the new banners for a while on the footbridge over the river where it was easily readable but tiny against the bridge, rested in the sunshine then continued on my way.

Sunday was also quiet in Haverfordwest town centre. First I carried my bike up several steep flights of steps to the castle, admired the view from above and found a couple of volunteers to get a picture with the banner. Then I headed out to Tasker Milward, Bradley's old school to get a photo there before setting up at the only place I could find a reasonable flow of people, which unfortunately was Tesco's. I sat for an hour or so with the banners on railings at the road junction, then cycled slowly round town and through residential areas with John's placard 'Who is Bradley Manning?/What's up with Brad? Find out here' sticking up out of my panniers. An inspired choice of wording - people had flagged me down in Cardiff when I was just cycling from A to B and I had a hunch it would work as a deliberate tactic to engage people. I wasn't disappointed. Several people stopped me, including a couple of lads who turned out to have been at school with him and a man who runs a local shop and says he keeps a Brad poster up on his wall.

Putting up my tent later in the campsite, I was approached by my neighbour who inquired if I was in the military, apparently on account of my Bradley Manning t-shirt. We had a long chat about his career (RAF dog handler, security industry, police force - he'd left through stress) and I told him what I had been doing the last few days (Bradley Manning solidarity and dealing with the cops in Bristol). In the evening, I headed over to Milford Haven, spoke with and handed out flyers to Catholic churchgoers - who had mostly never heard of Bradley Manning even though his family is Catholic on his mother's side and local - as well as to some youngsters and people out for evening strolls. I finished the day off in a pub with wi-fi to write up and sort out photos.

Early Monday morning I cycled into town on my mobile display unit and wearing a 'Free Bradley Manning' hi-vis vest for the benefit of passing traffic. Undeterred by the Bristol experience, I'd decided to do a banner drop between 8 and 10am from the footbridge above the A40 dual carriageway through the town centre. This happened to be the way to school for many kids at Sir Thomas Picton High who mostly took flyers, some stopping to ask more, and the way to work for others who I also offered flyers to and discussed the upcoming trial with; while this was going on above, hundreds of vehicles passed by underneath, so all in all it was good outreach. One lad saw the banners and came bounding up the steps to discuss Bradley Manning, Julian Assange, WikiLeaks, wars and the state of the world. A middle aged man in a suit walked past saying 'This will have to come down' like he was going to arrange it personally. I smiled and assured him that it was detachable (and added "you just undo the bows" in case he felt the urge to launch an unprovoked knife attack) and would be coming down later on as I needed it for something else. I watched warily after that as several police vehicles passed under the bridge but no one bothered me. Maybe Bristol has something to learn from Pembrokeshire in the matter of policing priorities.

Down from the footbridge, I spent the next three hours in Castle Square with the banners spread out on the ground and secured with sandbags loaned by the Castle pub, the sign on the bike inviting people to find out more and flyers on the luggage rack. I sat comfortably in the sun on a bench just behind the display, sipping iced soda and lime from the pub and waiting for the world to come to me, which it did. There was a steady stream of cars going past slowly through the pedestrian crossing and into town. Dozens of passers by on foot stopped to discuss Bradley Manning and the court case, or other related things.

These included a mum and daughter keen to do solidarity work themselves in the area; a woman who offered to read out news reports from Bradley Manning's case on her talking newspaper service for the blind; a number of people who wanted to sign petitions (not all with internet access) and some of whom complained bitterly about lack of a petition and received my suggestions for alternative forms of solidarity with varying degrees of enthusiasm ; a woman who had been a nurse for years in the US and had a lot to say about its domestic and foreign policies; a man who'd been following the case closely and wanted to sit and discuss it; others who didn't know what it was about asking questions; people who came over just to say they support Brad; several friends of the family. I gave a card for Brad's mum to the first of these.

Then a woman sat down on the bench and without any introduction asked me why I was there. I explained that I thought what Bradley Manning had done was of huge significance, that the public had a right to know the truth about the wars being fought in our names, that Brad had released this information to the world and that now he was being persecuted by the US for doing so I felt it was important to support him; also that I was in Haverfordwest because on the first day of his trial I had decided to show support in the place where he has roots. She asked me about my general motivation - what was behind this support? I wasn't quite sure what she meant but said that my primary motivation is anti-war and pro-peace. She said "I'm pleased you're here. I'm Bradley Manning's aunt."

Other friends and extended family members came along during the hour and a half or so that we chatted on the bench. I was able to point them to the recording of Brad speaking in court that they hadn't heard, to tell them about the US Embassy event in London, what we'd been doing in Cardiff over the weekend and other recent events, and they told me a bit about Brad as a teenager. As people wandered in and out, the conversation moved across many topics connected in one way or another with Brad, WikiLeaks, the US, our own government, ever expanding wars, the pursuit of profit, and the possibilities for a better world. The important thing for us to note is that Bradley's family really appreciates the support shown around the world for him.

At about 1pm I folded up the banners, returned my glass and sandbags to the pub, put everything back on the bike and we all went our separate ways, me back to the campsite to pack up and to have a long discussion with the owner about the persecution of whistleblowers in the NHS - he had been a union rep., hounded out of his job for supporting his work colleagues in various situations where they spoke out against poor practice/bad management etc. And then I headed for home, my Free Bradley Manning t-shirt badly in need of a wash.

News from the trial

I heard the first news from the trial on BBC radio while I was travelling back. The report was in mid-flow as I tuned in - two excellent comments from people supporting Brad outside the court, followed by the reporter announcing that the US government and 'many others' see things very differently, with the clear implication that sensible BBC listeners should do the same. No surprises there then.