Anti-fascists are gearing up for the return of the English Defence League to Tower Hamlets in East London on September 7th.

The EDL don't have any right to "march on" areas. This is not about expressing freedom of speech, it's about causing fear and division. That's why they must be opposed - Anti Fascist Network

The EDL's leadership have a peculiar obsession with this borough of London - this'll be the third time they've tried (and failed) to demonstrate en masse in the area. That's without counting leadership Tommy and Kev's ill-fated effort at a charity walk through the area back in June.

The last time the league put in an appearance in the borough, in September 2011, a thirty day ban on all parades in the area was enforced by the Home Secretary. On the day, an army of cops enforced separation between them and the thousands of locals and anti-fascists waiting for them just up the road.

So why Tower Hamlets? According to the EDL it's because the area is already under Sharia law. In fact they go so far as to claim that there is "No beer allowed, this is a Muslim area", which will come as news to regulars of the White Hart and Blind Beggar.

In reality there probably are a handful of nutters who want to establish a global caliphate and Taliban-style social mores in the East End but they're a tiny, tiny minority. Despite EDL assertions, local government is probably no more corrupt there than in any major city. Scare stories about 'ghettoes' and 'no-go zones' are just there to whip up hate and get boots on the street.

Last time, the EDL mobilised around 800 of their footsoldiers for their venture into darkest Muslamic country. When they announced Tower Hamlets 2013 they were at the height of their post-Lee Rigby bounce. Recent outings in Hull and Portsmouth have not seen anything like the numbers turning out in the immediate aftermath of the soldier's death but the threat to the area is still substantial.

There's every likelihood that there will be a state ban on demos and parades again but anti-fascist opposition on the streets is what counts. The Anti-Fascist Network is calling for autonomous anti-fascists to meet in Altab Ali park at 11 a.m on September 7th saying, "We are calling a mass opposition, the more people, the safer and more empowering it will be for all of us. On the day we aim to be mobile and fluid in order to disrupt the EDLs plans".

Look out for the Anti Fascist Network (AFN) banners and flags and join them on the streets.

Follow @THStopEDL for updates now and on the day 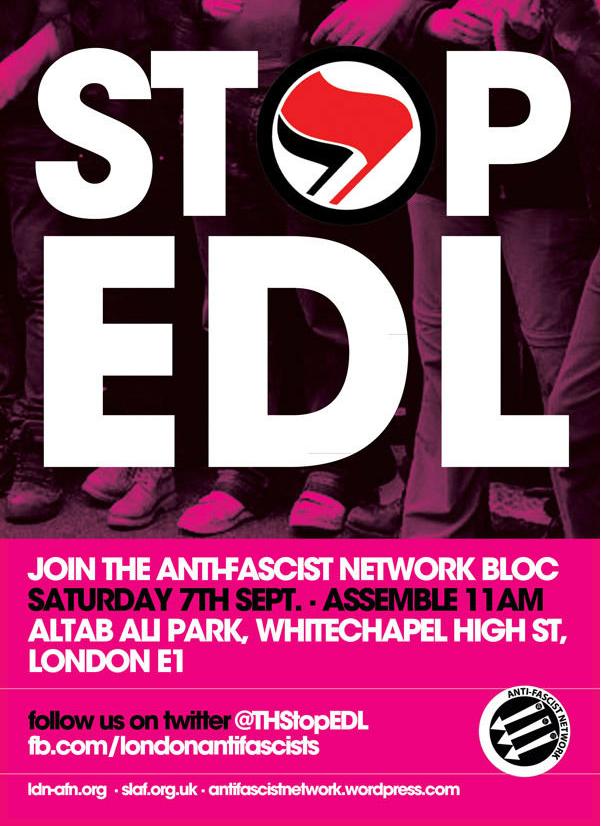