Several hundred people marched across London yesterday afternoon as part of worldwide events in UK, Canada, US, Australia, Nepal, and the Netherlands. 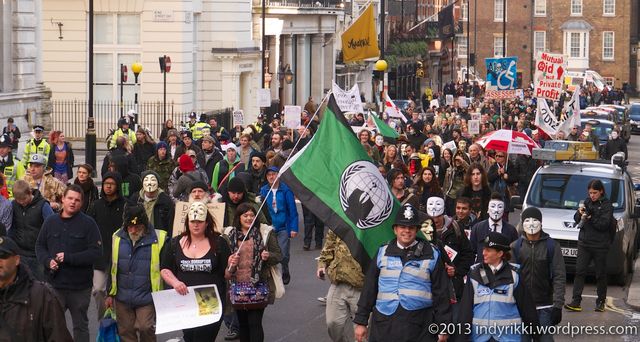 The march was called globally via a website that calls for non-violent direct action and an awareness campaign against corruption in governance and public policy, highlighting the corrupting influence of money and special interests. The site associates itself with the March Against Monsanto (

http://indyrikki.wordpress.com/2013/10/13/london-march-against-monsanto-12th-oct-2013/) which happened last year, and seems to be loosely affiliated with the ‘anonymous’ and ‘occupy’ movements.

The individual London march was called on Facebook by “Megaphone Mitch”/”Megafone Mitch” whose internet presence appears limited to the last few during which he has promoted similar events. Interestingly, a journalist contact has informed me that Mitch admits to being an ex-cop, and he certainly doesn’t seem to be well-known in any grassroots movements. This information isn’t intended to imply anything particularly negative, but it is notable that someone with little ‘track record’ can bring together hundreds of protestors to various events just through a campaign of promotion on social media. While on the one hand this can be a good thing, it should also be an illustration how easy it is to manipulate social movements, especially in the context of recent history eg Ukraine, Syria, Egypt and elsewhere, where immense manipulation has occurred on a far greater scale.

So at lunchtime yesterday, a few hundred people gathered at Trafalgar Square, and shortly after 1.30 they set off on what seemed to be a police-approved route (uncharacteristic of #anonymous protests that have in the past refused to comply with notification requirements). Mitch led with his megaphone from near the front of the march, and the whole event ran through the afternoon with precision timing. The only deviation from the plan was while passing Harvey Nicholls in Knightsbridge, twice in the afternoon, where a separate group protesting about fur sales at the store, were joined for a few minutes by the marchers, causing some panic by security staff and the closure of the doors.

The rally outside the Ecuador embassy ended with the announcement that there was a message from Julian Assange – this was read out over a PA twice, before Mitch rallied his gang and they set off to Whitehall and Parliament Square, with a brief stop and road blockade at Downing Street along the way.

Policing throughout was fairly tolerant, closing off Whitehall, ignoring breaches of guide tapes and so on, but with plenty of back-up nearby, always in overall control.
Under Mitch’s guidance and megaphone leadership, the crowd arrived back at Parliament at the advertised time of 5pm. For about half an hour, the road in front of Parliament was closed to traffic. The only scuffle of the afternoon occurred when police attempted to grab a man for questioning after an incident in which someone’s phone was smashed in an altercation. The crowd wouldn’t give up the person the police wanted to speak to, and twice the cops had to retreat from the crowd despite robust attempts to pull him out.

More police arrived and, outnumbering the remaining crowd, they cleared the road, mostly through persuasion but backed by heavy numbers, and some singing, chanting, and rap video-making went on, while lines of police kept the crowd off the road, as numbers dwindled into the night.

Organised by unknown people, attracting a motley bunch, which seemed to include a range of genuine protest groups and all ages as well as unfortunately some far-right factions, watched by shadowy figures on the edges, this was a very weird event. In terms of protest, it suffered from having an unfocussed message, but the ‘anonymous’ brand was well represented. I had my own suspicions that some people there were not all they seemed, and I was not alone in this – there was quite a lot of suspicion and paranoia around.

At the start and at the end of the march, a red ‘Justitia’ battle-bus circled around, beeping its horn and advertising the ‘force4justice.co.uk’ website. This seems to be a possibly right-wing but libertarian outfit, pushing for changes in the judiciary system and publicising the incarceration of an elderly man named Norman Scarth, who was caught recording a secret trial. People cheered as the bus passed by, and a couple of well-dressed gentlemen waved from the upper deck. Another curiosity in a curious afternoon.