***STOP PRESS 13th March: The Metropolitan Police has withdrawn its application to strike out women's case as the legal battle continues. Solidarity picket on Tuesday 18th March will go ahead as planned.***

Five of the eight women taking legal action against the Metropolitan Police, due to undercover police officers deceiving them into long term intimate relationships, will be opposing Scotland Yard's attempt to have their cases struck out on Tuesday 18th March. The women and their Police Spies Out of Lives support group have called for a solidarity picket outside the Royal Court of Justice, The Strand, at 9am on Tuesday 18th, as part of a week of action (17th - 21st March). 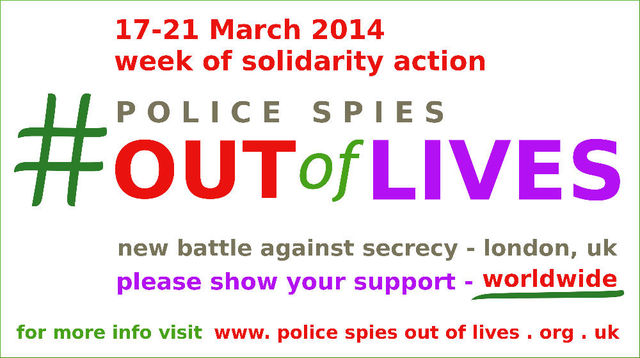 The police are using the absurd argument that because they refuse to neither confirm nor deny their undercover activities, they will be denied a fair trial and therefore it should not go ahead. The Met. are claiming Neither Confirm, Nor Deny (NCND) is a policy regarding undercover operations. This is despite, to give just two of many examples, the police confirming to the media that Mark Kennedy and Jim Boyling were undercover officers. If this paradoxical nonsense fails to persuade the judge, the police will attempt to block the standard procedure of providing their documents to the claimants or their lawyers.

The five women are pursuing common law claims of "deceit, assault, misfeasance in public office and negligence" since their relationships occurred before the Human Rights Act (1998) was passed. This hearing comes after the three other women in this legal action had to battle for over a year against their human rights claims going to a secret court; to widespread dismay, the Court of Appeal found against them in November 2013, and their battle continues.

This ongoing legal battle continues despite Theresa May's announcement of a public inquiry into undercover policing. It is unclear what the scope of the inquiry will be and whether it will examine sexual and intimate relationships; it is also not scheduled to begin until 2016. This inquiry has also been called by the Home Secretary who has promised to scrap the Human Rights Act if the Conservatives win the next election.

Furthermore, any public inquiry must question the whole abuse of power within UK policing. The women taking legal action and their supporters have formed the Police Spies Out Of Lives (PSOOL) campaign to challenge the ongoing police abuses carried out against individuals as well as the disruption being caused by undercover policing to the whole social and environmental justice movement.

It is important to remember that all of the women were targeted by undercover officers precisely because they were effective activists struggling for change. They are not just victims, as largely portrayed in the mainstream media, but continue to fight for justice.

Also, this is not a historical issue; undercover officers continue to infiltrate and disrupt social justice and environmental groups. While the case being heard on the 18th March concerns officers employed by the Special Demonstration Squad (SDS, 1968 - 2008), their activities were continued by the National Public Order Intelligence Unit (NPOIU, 1999 - 2011) and the National Extremism Tactical Co-ordination Unit (NETCU, 2004 - 2011). In 2011, these were merged into the current National Domestic Extremism and Disorder Intelligence Unit (NDEDIU) run by the Metropolitan Police's Counter Terrorism Command, known within the Met as SO15. The UK police force continues to obfuscate their undercover operations by re-branding them in even more Orwellian terms.

Undercover officers sought to undermine: the justice campaign for Stephen Lawrence and other Black justice groups, the Hillsborough Justice Campaign, Animal Rights, Anti-Capitalist, Peace and Environmental campaigns. The stated aim of undercover police units is to prevent 'disorder'; so any campaign that seeks a change to the status quo is a legitimate target. In response several groups affected and their lawyers have formed the recently launched Campaign Opposing Police Surveillance (COPS).

We must support the women who have suffered the most at the hands of undercover officers and who have the strength to take on the state in solidarity with the thousands of individuals and groups who have been targeted by undercover policing. Let them know that they don't fight alone: 9am, Tuesday 18th March, Royal Court of Justice, The Strand, WC2A 2LL.

The Met withdraw their application to strike out the case

In a surprise move today the solicitors for the Metropolitan Police have withdrawn their application to strike out the case of women who were deceived into intimate relationships with undercover police. The application was the latest in a series of attempts to avoid answering the claims made by the women and hide behind a veil of secrecy.

Despite clinging to their assertion that they can neither confirm nor deny the identities of any former undercover officers they say that in the light of the announcement by the home secretary of a public enquiry into undercover policing “it is now not proportionate or appropriate for the claims to be struck out.”

“We welcome this long overdue decision to withdraw an application which we were were confident no court would grant. The previously inconsistent approach by the Police in which they took part in a TV series about the Special Demonstration Squad and had confirmed the identity of some officers, and the information already in the public domain means that this application was farcical. The Police have failed thus far to provide a substantive response to the claims, and we hope that they will now do so without further delay. We expect the police to stop prevaricating and acknowledge the harm done by their officers.”

In a statement last week, the women said:

“Neither Confirm Nor Deny” should not be used as a shield to prevent any illegal and immoral activities by the police from ever coming to light. Effectively they are attempting to use NCND to evade accountability and avoid any genuine scrutiny of their actions.”

Since publicising this case the women have been inundated with expressions of public support and outrage at the police’s actions. The women will keep pushing for truth, justice and to prevent this deceitful abuse from ever happening again.

This application involved 5 women who were deceived into intimate relationships by undercover police officers in the Special Demonstration Squad – Bob Lambert, John Dines, Jim Boyling and Mark Jenner. It is linked to the case of another 3 women who were deceived into relationships with Mark Kennedy of the National Public Order Intelligence Unit. Further information about the case is available on the website:


from Police Spies Out of Lives

Solidarity Picket will continue as planned: Met are still fighting the case

Solidarity Picket will continue as planned: Met are still fighting the case