Four anti-war activists are occupying the Finnieston Crane at this moment to protest against the glorification of war on Armed Forces Day. They unfurled a banner that reads ‘Resist Militarism # White Feather,’ to show dissent to the increasingly US-style culture of militarism growing in the UK and to celebrate those who refuse to participate in war. 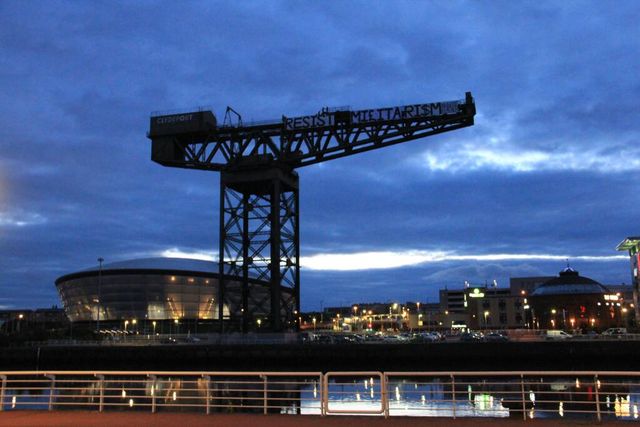 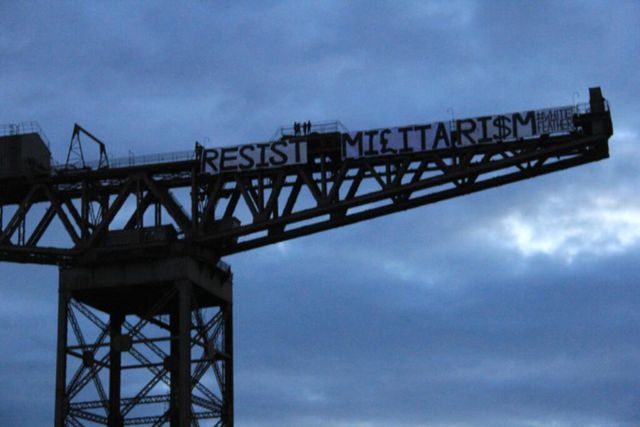 Today is the sixth national Armed Forces Day in the United Kingdom, with this year’s main celebrations being held in Sterling. The day consists of a flyover of military aircrafts, a simulated combat mission, tanks and other military vehicles alongside musical festivities billed as a fun family day out. Armed Forces Day is presented as an opportunity to appreciate veterans – but in reality normalizes militarism through the parading of military tanks, aircraft and combat techniques behind a charade of tokenistic thanks to veterans.

This action highlights that such unbridled militarism does not go unnoticed.

David Cameron plans to spend £55,000,000 on "truly national commemorations" to mark this anniversary. Cameron has inappropriately compared these to the "Diamond Jubilee celebrations" and stated that their aim will be to stress our "national spirit".

One of the protesters, Angela D, says ‘We find it repulsive that in a time of so-called ‘austerity,’ where government cuts to benefits have put 200,000 additional children into poverty, that £55 million can be spent on one ceremony.'

Another of the occupiers, Frida, has stated ‘We are occupying the crane in protest of Armed Forces day – we object to the glorification of war and are here to make our voices heard.’