Saturday 25 April is Anzac Day, and on this centenary of the first Gallipoli landings special commemorations are planned in Australia, New Zealand and in London including government sponsored events designed to bolster support for today's wars rather than mourn the terrible losses in WWI and learn the obvious lessons.

Here in Wales, we have chosen this day to celebrate the life of the great peace campaigner Elisabeth (Lib) Rowlands-Hughes, born right at the end of WWI, who lost an uncle at Gallipoli and three more in WWI: near Gaza and in France: uncles she never knew but remembered all her life and whose deaths she described as "an utter, utter, utter waste." Lib, who died last November aged 96, would have appreciated an event for peace on this anniversary which she would have seen as an invitation not to glorify war but to reflect on its futility. 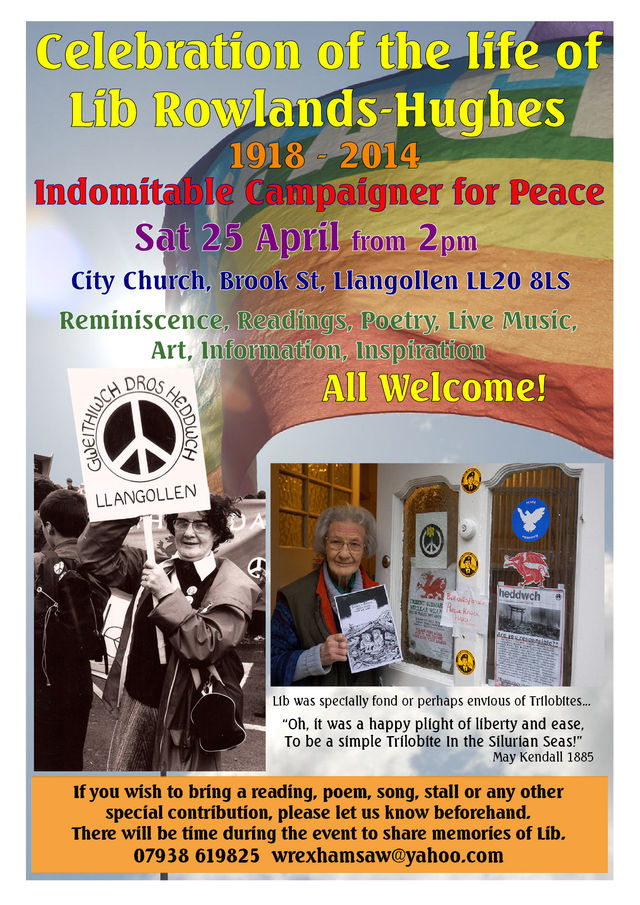 Join us on Saturday 25 April from 2pm for reminiscence and readings, poetry, live music, art, information and inspiration. This public celebration of Lib's life and of her peace activism will take place at City Church, Brook Street, Llangollen, Denbighshire LL20 8LS. All welcome.

The grand-daughter of Wrexham GP Dr E D Evans on her mother's side and of the Methodist preacher David Lloyd-Jones on her father's, Lib was also the great grand-daughter of John Jones Talysarn, the celebrated Calvinist preacher, who in turn was descended from the 18th century poet Angharad James. The Davies family of Liverpool were first cousins to Lib's father: they included Stanley Lloyd Davies, who was also in Gallipoli in 1915 with his cousins and who became a committed pacifist thereafter, while his brother George Maitland Lloyd Davies was imprisoned a number of times during WWI for conscientious objection and founded the Fellowship of Reconciliation in Wales (Cymdeithas y Cymod). On the other side of the family, Lib's father's cousins included Gwendoline and Margaret Davies (the Davies sisters of Gregynog) who became art collectors but who also, during WWI, set up a canteen for soldiers at the front and later set out to improve the lives of returning Welsh soldiers through art and music. Their brother, the 1st Baron Davies of Llandinam, established the Temple of Peace in Cardiff.

Lib was born into an immediate family in which her parents and grandparents were mourning the wartime loss of four brothers/sons between them and a wider family that was privileged but with a social conscience and a notable pacifist streak. Educated at a boarding school in London and at Aberystwyth University where she studied art, by the 1930s Lib was an active member of the Peace Pledge Union; she joined CND right at the start and campaigned in peace and justice groups for decades, including court appearances and fines for her part in the Snowball campaign of the 1980s in which single strands of fence wire were symbolically cut at nuclear establishments such as Capenhurst. As she became older and less mobile, Lib continued her campaigning and networking at a distance, through phone calls, letters and a great deal of photocopying, widely sharing news items she felt to be important. Stanley Lloyd Davies' grand-daughter Elin has written: "My Auntie Lib was not just a pacifist. She was a Pioneer for Peace, an artist and a story teller. "