With another climate chaos summer very much upon us, what better time to air your genuine grievances and take strike action or protest against the bosses?

Many workers on Merseyside are making the most of the weather and getting out into the streets. Their causes are varied, but in each case they are fighting back against attempts to get more work out of people for less money. This is a battle that is being fought in every single workplace, so every wage slave should be organising amongst their colleagues for better pay and conditions. Together we are stronger than the bosses. United, the workers will never be defeated! Divided, we fall! 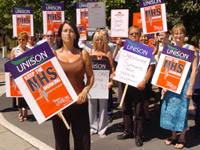 Local firefighters are currently on strike. Merseyside is without much of its cover, since the Territorial Army are currently in Afghanistan, Iraq and Kazakhstan, supporting Blair's oil wars. However, this is not the firefighters' fault, and they are only striking to prevent cuts that would leave Liverpool city centre with less fire engines than we currently have, and at least one hundred less firefighters. If the government pulled out of any Middle Eastern country, they could invest the money in more fire engines!

Healthcare is currently a massive issue, as can be seen in a previous Liverpool feature. As local trusts struggle to pay back their 'debts' to the government, cuts are being made to vital services. In July, angry hospital staff in Ormskirk and Southport protested against redundancies. Ambulance staff have also been on a series of strikes over their employers' double-dealing on a pay agreement.

Civil servants are also getting very hot under the collar. On July 31st, workers in the Bootle tax office were among up to 8,000 nationwide who walked out over plans to make them fill in forms account for every hour of their workload. This follows an incident in March when workers in Litherland House refused to put up with a lack of toilets in their offices.

Prison guards in Walton are also looking to strike, having been handed an effective pay cut and tougher working conditions.

But of course it's not only public sector (government) employees who are being abused. In June, workers at a car parts factory in Ellesmere Port took part in a 'wildcat' strike (one not authorised by their trade union) when redundancies were announced. Their unions - the TGWU and Amicus - condemned the action, and continued negotiating the redundancies.

This shows the limits of traditional trade unions. Once elected, the leaders become seduced by wealth and power. At best, they take some of the edge off the bosses' attacks. At worst, they actively conspire against the workers that elected them. The solution to this could be genuinely democratic control of our unions, along the model promoted by the Industrial Workers of the World.

In the meantime, the capitalist system demands ever greater pressure on workers, alongside its wars and environmental devastation. For every pound a shareholder gets and doesn't work for, someone else works but doesn't get paid. Strike or be struck!