Mayday in the East Midlands

Mayday was celebrated in a variety of ways around the Nottinghamshire/East Midlands area. From organised marches to Pagan festivities.

Click here for a full round up of all the Mayday events that happened UK wide. 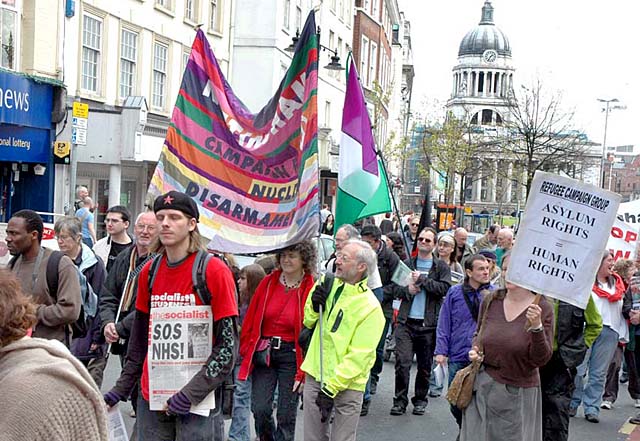 Mayday has a lot of different events and traditions associated with it. In political terms it is International Workers' Day, and commemorates the historic struggle of working people throughout the world, and is recognized in every country except the United States, Canada, and South Africa. This despite the fact that the holiday began in the 1880s in the United States, with the fight for an eight-hour work day and the Haymarket bombing in Chicago.. In England May Day has traditionally included rites and celebrations which include crowning a May Queen, Morris dancing, and dancing around a Maypole. A lot of this tradition derives from the pagan festival of Beltane. May Day has been a traditional day of festivities throughout the centuries. It is mainly associated with towns and villages celebrating springtime fertility and revelry with fetes and community gatherings. The most significant of the traditions is the May Pole, around which traditional dancers circle with ribbons. In Nottingham we have had Mayday rallies for many years see 2004 | 2003