Monday May the 1st saw the culmination of the MayDay weekend 2006. A series of demonstrations and protests took place all over the UK and beyond. In London up to 4000 people marched from Clerkenwell Green to Trafalgar square in the traditional TUC march. One of the largest blocs of the march was the Autonomous Bloc which consisted of up to 800 people, marching on the issues of precarity and migration. Meanwhile, the Space Hijackers were having a 'police victory party' outside the Bank of England [Pics: 1 | 2 | 3 | 4]

The march went off peacefully until the Autonomous bloc tried to bring its soundsystem into Trafalgar Square to be used as an open microphone for speeches and discussion. At that point police snatched the pedal powered soundsystem from the crowd and prevented the Autonomous Bloc from assembling in the square. It was not until the march finished that the soundsystem was given back. Whilst this was taking place thousands of people listened to speeches at the rally in Trafalgar Square. After 4pm, people dispersed.

Other May Day demonstrations and protests around Britain included:

A Workers Memorial Day demonstration in London to commemorate those people who have been killed at work. In Manchester, a Chaos Mass bike ride took place, as well as a May Day march, an anti-nuclear demonstration [Video] to commemorate the 20th anniversary of the nuclear disaster in Chernobyl, and a picnic against capitalism. A march [more] also took place in Cambridge against the privatisation of public services, as well as an 'Extra tea for mayday' action where activists visited ASDA to give extra tea breaks to the workers forced to work on Mayday.

In Newcastle a contingent from Tyneside Community Action for Refugees marched demanding the right to work for refugees and asylum seekers, in Liverpool the Merseyside May Day celebrations included a march and a rally in Princes Park, and in Nottingham a march and rally [more] also took place. In Scotland there was the traditional May Day march and rally in Edinburgh, and a MayDay parade in Glasgow.

For reports of the massive demonstrations in the US and the several Euro MayDay Parades in Europe, as well as the full UK's Mayday 06 events listing click at the 'Full Article' link on top. 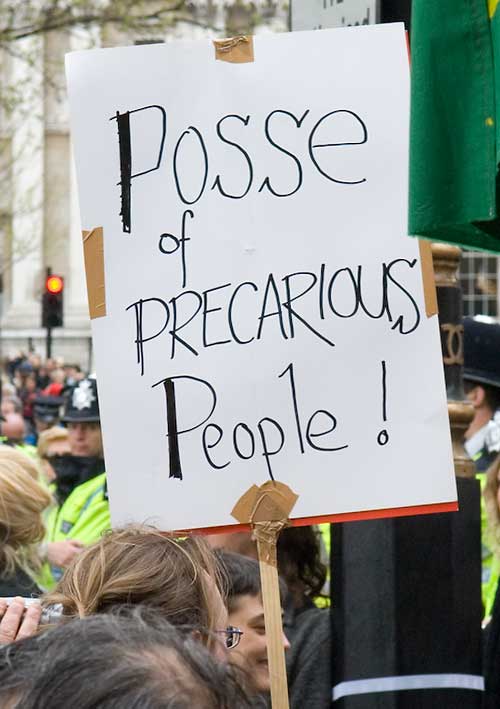 A series of EuroMayday parades that took place in 22 different European cities. These saw 30,000 people in Paris, 120,000 in Milano, and several thousand in Napoli and Liege. In Barcelona thousands also demonstrated [Video] , the same as in Sevilla where a parade [Videos] marked the culmination of the Mayday Sur week of events, and which included a massive banner drop in one of the best known chainstores. In Germany, 5,000 people took the streets in Berlin, and 2,000 in Hamburg.

Further afield, in the United States, over 1.5 million people marched in pro-immigrant demonstrations, even though May 1st is not a public holiday in the US. This included 700,000 in Chicago, the birth place of May Day, where thousands of workers and school students walked out to take part in the pro-immigration march across the city. 500,000 people also marched in Los Angeles, 100,000 in New York, 100,000 in San Francisco, 100,000 in San Jose, and 75,000 in Denver.
See videos: Summaries of the demos | In-depth reporting on the demos | Solidarity statement from the EZLN to the immigrant demonstrators (Sub Marcos)

In Nicaragua, an anti-war demonstration was held at the British Consulate in Managua. The demonstrators denounced British participation in the invasion and occupation of Iraq. A global virtual strike also took place in solidarity with the May 1st and for the freedom of movement.

This year, Mayday and the weekend before sees a number of events ranging from conferences to protest parades, with some focussing on the issues of 'precarity' and 'immaterial labour'.

In Cambridge, Friday to Sunday sees the "Immaterial Labour, Multitudes, and New Social Subjects" Conference, with a live audio-stream available at www.radiovague.com and an IRC chat room at chat.indymedia.org#immaterial.   Saturday 29th in Cambridge also sees a Critical Mass Bike Ride and a Defend Public Services Protest.

In London on Saturday and Sunday, the Square Social Centre is the venue for a series of events, including a two-day conference Anarchism 06: 21st Century ideas and Action - which includes films, discussions and sessions on union workplace organising, autonomous workers struggles, the recent anti-CPE uprisings in France, the Broadway Market occupation in Hackney, the future of social centres, and the significance of Mayday in political struggles (see full programme).

On May 1st, there's a morning critical mass bicycle ride, meeting at 11am under Waterloo Bridge. At 12 noon Anti-SOCPA campaigners will be 'beating the bounds' around the boundary of the parliament protest exclusion zone, while the SpaceHijackers are holding a tongue-in-cheek 'Police Victory' street party outside the Bank of England at 2pm.

The annual Trade Union march is combined with a national march for workplace justice, and is meeting at 12 noon at Clerkenwell Green before marching to Trafalgar Square for speeches. Earlier in the day, a mass and interfaith rally outside Westminster Cathedral will be held in support of migrant workers.

There's also an Autonomous Mayday Parade Bloc organised for the march, which is being held in solidarity with other EuroMayDay events happening around Europe. The EuroMayDay parades of the last few years have brought together casualised workers, temps and part-time workers, migrants and the unemployed, organising together around the theme of 'precarity', insecurity and workers rights. The autonomous parade is also calling for freedom of movement across borders for everyone, and the right for people to stay and work in the country of their choosing - see London NoBorders Mayday Statement. 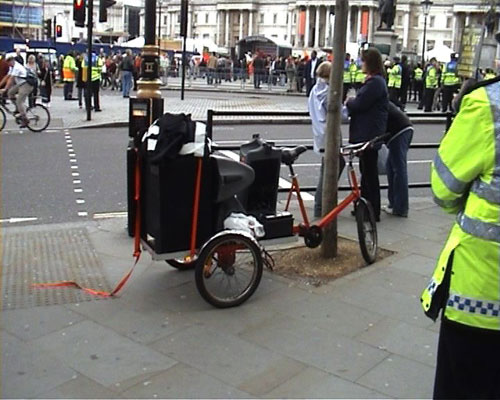 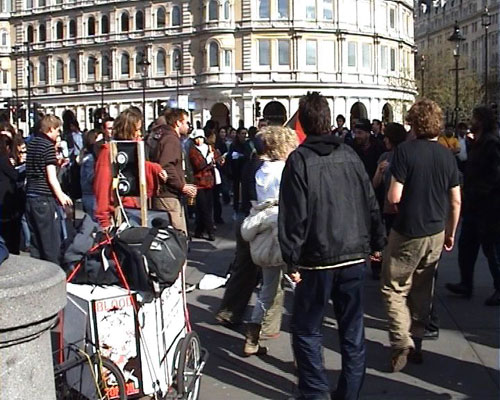 The sound system from the Autonomous Block was confiscated by the police but the Critical Mass sound system was later allowed to play in the Square with people dancing to it.