V3 Power build small wind turbines and run courses teaching people how to make their own turbines. They put a couple up at various events, to inspire folks to get involved with such alternatives. The turbines they build are 'axial flux' turbines with a 2.4 metre blade in diameter and typically sit on top of a 10 metre guyed mast. They are mostly made from recycled materials

By running courses where people can learn how to build, install and maintain their own turbine they offer people and communities the chance to release themselves from reliance on the national grid while making a real difference to the climate change problem. So, get involved. 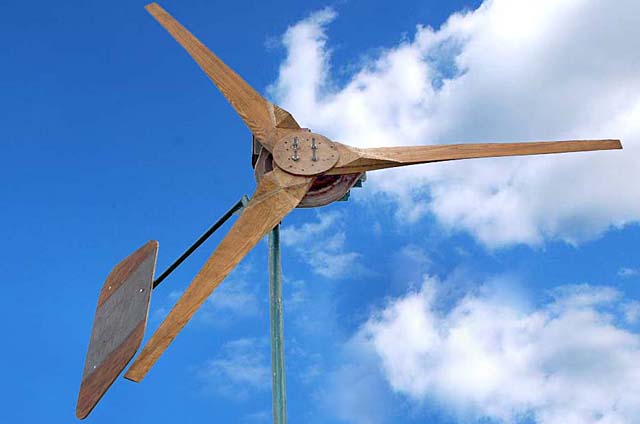 Why wind power deserves support on a commercial scale:

* It's clean. Wind power does not produce dangerous waste, nor does it contribute to global warming.

* It's abundant and reliable. The UK is the windiest country in Europe and the resource is much greater during the colder months of the year, when energy demand is at its highest. Wind power, in combination with a full range of renewable energy technologies, such as wave and solar, could meet all of our electricity needs. Technology is being developed to store wind power as hydrogen which can then be used to power fuel cells in power stations and in vehicles.

* It's affordable. The first offshore wind turbines in the UK are producing power more cheaply than our newest nuclear power station. The UK Government's figures show that all wind power will be cheaper than nuclear power by 2020.

* It works. Denmark already gets 20% of its electricity from wind power.

* It creates jobs. The wind industry could bring thousands of new jobs to the UK, many of them using offshore engineering skills used by the declining oil and gas industry. If offshore wind were developed to supply just 10% of the UK's electricity, then 36,000 jobs could be created.

* It's popular. Wind energy is one of the most popular energy technologies. Opinion surveys regularly show that just over eight out of ten people are in favour of wind energy, and less than one in ten (around 5%) are against it.

'Spring into Action' is part of an emerging grassroots movement against climate change. Born out of the Camp for Climate Action, 'Spring into Action' unites people across the east of England into making changes in our own lives, creating small scale solutions in our communities and resisting those who still seek their own short term gain over a safe future for us all.

So get involved, come and help organise the change that you want to experience in our world. Eastside Climate Action