Peace And Unity! In Our Community!

Over 300 people came together in Nottingham today to voice their opposition against the city's gun crime and gang culture problems. The families of victims of violent crimes, such as the killing of Nathan Williams in the Meadows last year (read article) came together to call for 'Peace And Unity' and to put an 'End To The Killings'. A march started at the Forest Recreation Ground around midday and made its way to the city centre along Mansfield Road. The march was very loud and cheerful and attracted a lot of attention.

On arrival in the centre there was a rally in the Market Square, with talks and speeches by members of families that have been affected by violent crime as well as some of the organisers. Speakers included Paula Platt, who lost her 14 year old daughter Danielle in 2004 as she walked through the St Anns area after the Goose Fair in October 2004. Sarah Wallace, who lost her 20 year old son Daniel over a year ago in a stabbing in Radford, any so many others ..... The list of grieving parents is just too long. Added urgency to the proceeding, since there was yet another shooting in the St Anns area just this last thursday. As the crowds had gathered, silence was observed with thoughts of those, so affected. 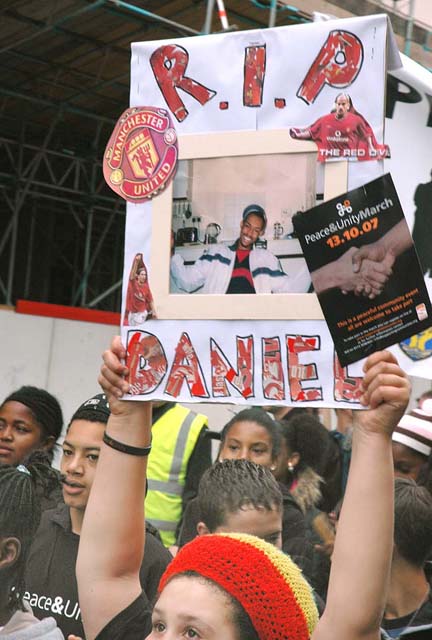 As you will see from the links below, the issue is still ongoing. After the shooting of Danielle Beccan, 'Nottingham Stands Together' (on gun crime) campaign attracted thousands to the Market Square. Digitaries attended, speeches made, actions promised. .... Here we were again. When can we expect this will be the last of such gatherings?