Animal rights activists in Nottingham campaigning against the sale of Foie Gras in the city have found themselves the targets of police repression. On the evening of Friday December 14, campaigners were told that they could not use a megaphone, with the police citing Section 14 of the Public Order Act 1986 as their basis for this prohibition.

The heavy-handed police response is indicative of a national trend towards increasingly repressive policing of animal rights protests and a a more general limitation on the right to protest. 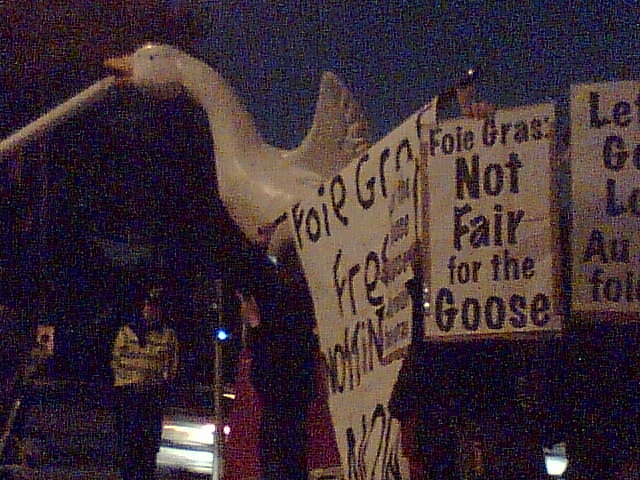 Once again on Friday (14/12/07), Nottingham Animal Rights were protesting against the cruelty of Foie Gras outside the last few restaurants in Nottingham that persist in serving it. The production of this unhealthy pate made of diseased goose or duck liver, is so barbaric (involving force feeding a factory farmed bird until their liver swells to ten times its natural size) that it has been banned in the UK and most of mainland Europe, however sale of imports is still legal.

Once again the police having only consulted with the restaurant and not spoken to the activists to obtain a more balanced perspective, attempted to suppress the protest, this time by using section 14 of the public order act 1986. Various assembly conditions were imposed by several officers on the scene including a ban on the use of megaphones, and eventually the protesters were told they could only continue their protest from a distance (a little further down and on the opposite side of the road) where they could not talk to customers of the restaurant in question.

The following day (15/12/07) saw further actions as part of a national day of action against Foie Gras.

In Nottingham now only Merchants (part of the Lace Market hotel), French Living and Alea (a casino), have this unpopular item on the menu.

Under Section 14 of the Public Order Act 1986, the police have powers to impose conditions as to the time, place and duration of a public assembly involving two persons or more. Until 2003, this power could only be used where the protest involved 20 persons or more but following intensive lobbying by the pharmaceutical industry and the police this figure was reduced to just two. In order to justify the imposition of conditions, the police need to have reasonable suspicion that the assembly is likely to cause serious disruption to the community, serious criminal damage, serious public disorder or that the purpose of the protest is intimidation with a view to the coercion of others.

Before the Public Order Act 1986 came in to force the Home Office published a white paper entitled "Review of Public Order Law" which set out the rationale for the proposed changes to the law. In relation to the new powers governing assemblies it stated that the new powers to regulate assemblies would be unlikely to be exercised frequently (and this was then in relation to assemblies of 20 persons or more). Regarding the 'coercion' condition above, it stated that this could be used where pickets deliberately obstruct the passage of those going to work or where demonstrators used other means forcefully to obstruct the free movement of people or vehicles.

The white paper also stated that conditions should not be imposed, which effectively amounted to a ban of the assembly. In practice the police nowadays are routinely abusing Section 14 on animal rights protests, even where the protest is entirely peaceful. Conditions are being imposed for example on protests consisting solely of a small number people displaying a banner, addressing the public by megaphone and handing out leaflets to passers by. Certain police forces, notably Hertfordshire and Cambridgshire police, are imposing conditions which do effectively amount to a ban. For example, on a recent SHAC demo Hertfordshire police stated that under Section 14 the assembly had to take place on a section of road which was obscured by a hedge, effectively preventing the protestors from communicating with the public. On the same day in Cambridgeshire, officers imposed conditions stating that the protests could only take place for 15 or 30 minutes, which again effectively amounted to a ban. Clearly in both situations the police were acting in a manner very different to that which the original legislators ostensibly intended. Firstly the officers could not reasonably have suspected that the purpose of the protest was to coerce others (ie forcefully to prevent people from going about their lawful business) or that the protest might result in serious disruption etc. Secondly, the conditions imposed prevented the protestors from expressing their views to the public, and thus effectively amounted to a ban on the protest. Similarly, the police have also used Section 14 to restrict the use of megaphones and displays of banners. In 2006 for instance, an animal rights activist was found guilty of breaching a Section 14 order for using a loudhailer during a protest outside a GlaxoSmithKline site in Ware. Although he argued that the Section 14 directions were invalid, the site's proximity to a gymnasium and two schools, including one holding exams at the time meant the direction imposed were lawful.

Nottingham will defend its right to protest!

Such repression seems unlawful but it inspires me to support the campaign. When's the next protest?

Glos Animal Action had a smiliar experience during a foie gras protest....in the end an activist was arrested for actually filming a police officer!

there are far worse noises than someone fighting 4 a good cause using megaphones ,fireworks that are let off outside of bonfire night that frighten older people .and animals .they are totaly unescassary . the sound of police cars with horrible sirens surely they could invent sirens not so disturbing .the only thing the sirens do is alarm intruders to scarper .or violent hooligans to run .accidents are differerent or emergancy .the trouble with this country it is now a police state if it suits the police and goverment its ok we cannot now voice our honest opinions .or stick up for what we believe in .america and us put pressure on russia to end communism so the people had freedom .and of speech .yet we now find .we in our country cannot vioce our honnest opinions..cruelty is where it all begins animal rights obviosly recognise this .if you kill or maim animals how do you treat your children .that is where it begins .i deal in off road tyres i do my best not to let them get in the hands of hunters ive had men come to me 4 tyres .they live on council estates .and have gun licences .they take 10 year old kids hunting with them .they shoot at anything ,just to be macho .shoot an innocent animal .yet they wont join the army .to go to afghanistan .cowards .//they shoot back there .and i dont condon that slaughter niether . guns should be farmers only or riffle ranges only no town folk need guns ./will the police take away the silly bugles on the hunts .no they are the rich and famous so any 2 bit hunters dont come to spondon tyres for off road tyres .and animal rights blow your bugles on the hunt in varius directions to upset the dogs .by the way who pays 4 all the dog food silly outfits horses that are on theese hunts it could come from undeclared income .a tax fiddle anyone checked it out keep it lads pete ambler derby

keep blowing your trupets //the hunters can /its prejudice from.police

keep up the good work its only police prejudice once again .go on a hunt and complain about the bugles .the police must act as hunting is suposed to be banned ./take your fireworks along and have a display at the hunt ?? its legal //fight to get guns banned it seems now more .so called hunters live on inner city housing estates .they dont need guns /they are not farmers .they kill anthing that moves take kids along to be macho .this this where gun culture starts with kids .guns should be at riffle ranges only if your town folk anyone see my point with brains start a petition to send to prime minister put my name on it / mycompany deal in tyres off road .all.hunters cannot buy them from us .farmers plant men and off road sport only so any callous hunters do not try to buy from us ..keep blowing those trumpets lads .thier prejudice