BNP Withdraw Festival Licence Application in the Face of Protests

On Tuesday June 10, Amber Valley Borough Council met at the Town Hall, Market Place, Ripley to hear the premises licence application for the BNP's Red, White and Blue Festival, scheduled to take place on land owned by party member and former Tory-councillor Alan Warner at Denby, Derbyshire from the 15th to the 17th August 2008.

Security at the meeting was tight. Protesters gathering outside were greeted by several van loads of Derbyshire's finest, evidence gatherers and a FIT Team. Inside, the police, who had initially raised no objection to the licence, claimed to have received "significant intelligence" which had forced them to reconsider their position. Fearing conflict between the BNP and anti-fascists they wished to see the imposition of new conditions including the erection of a seven-foot high fence around the site and the installation of temporary security lighting. When invited to sum-up their position the BNP representatives withdrew their application and stormed out of the meeting, insisting they would go ahead without the licence. 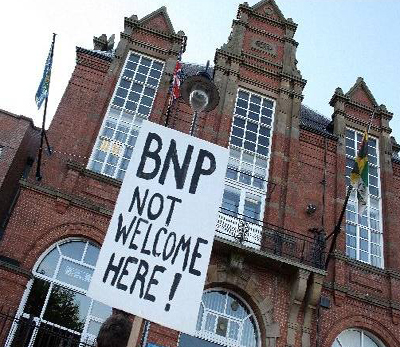 Predictably, the BNP were less than enthused by the day's events. John Walker, national treasurer of the BNP, whinged: "We came here with an open mind. As it went on we came to the conclusion that it was becoming a farce because of the hoops we were being asked to jump through by Derbyshire Police. The police have caved in to mob rule. We are going to withdraw this application and this event will go ahead without a licence." Warner's security guard Clarke, even went so far as to accuse the police present at the hearing of being in cahoots with anti-fascists.

This may have come as a surprise to protesters held behind a line of police officers outside the hall. Derbyshire Police utilised Section 14 of the Public Order Act 1986 to corral campaigners into a designated protest zone which they later enclosed with fencing. When they left, anti-fascists had their vehicles followed by the police most of the way to the Derbyshire/Nottinghamshire border, ostensibly to protect them from the BNP.

The Red White and Blue "festival" is an annual event organised by the BNP for members, friends and family. This year, as last year, it is to be held in Denby, Derbyshire on Alan Warner's farm. While last year's event was hugely controversial with locals, it saw little organised opposition. This year, things look very different with Nottinghamshire Stop the BNP, Derbyshire Unite Against Fascism and Antifa already mobilising against the event and Unite Against Fascism nationally considering their response.

It is clear from the BNP's statements that they intend to go ahead with their festival regardless of the licence. This will cause them problems, however, as they will be unable to sell alcohol or play music. Anti-fascists are continuing to build for a protest against the event, focusing particularly on Saturday August 16th when a national mobilisation against the "festival" has been called.

One thing that worries me...

All this 'ban the BNP' is all very well but surely you are setting a very dangerous precedent? It may be very funny while it's the BNP but what next? Stopping this festival isn't likely to change anyone's opinions. It really does smack of childish, tit for tat, we got one over on the nazi's, without serving any real purpose. In fact I would imagine it will only serve to make them more determined. If the BNP and their views are indeed so abhorent surely the best tactic would be to allow them to air these views and let people see for themselves.
Or do you think free speech is only worth fighting for when its used to say things you agree with?

It's not a free speech issue

It was disallowed because it would have caused undue disorder. They can still say what they want, but they cannot hold a festival and invite hundreds of people to descend on a little rural town which would probably prefer to be left alone by both sides.

Besides, the "let their ideas fail on their own merit" policy doesn't really apply here as they are not inviting neutral parties to hear both sides, they are holding a celebration of their ideology. They will not be encouraging opposing views.

Regardless of whether people claim to represent the left or right of the political spectrum, they can still disagree with basic foundations of human rights to organize, despite their political ideologies.

'Nazis' have exactly the same rights as us, we should stand up for anyone who's getting a hard time from the cops because they want to celebrate their belief.

People have a right to come together and not encourage opposing ideologies. Just like that post does up there.

When propaganda campaigns become violent- as many believe the BNP ultimately will, won't they have to legitimize themselves in a court of law? My point is that campaigning against the BNP enacting their basic human rights of organization and protest is an insane waste of time. 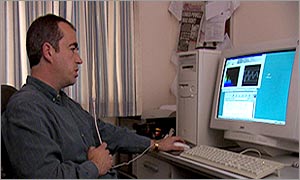 their organisers are dribbling perverts, nothing but apologists for perverted mass nazi baby killers.
Mr Darby BNP comms organiser, why dont you get a proper job instead of leaching off innocent BNP members funds who youve conned into believing you care about britain, hahaha.
Never trust a nazi,never forget!
From the state of your sad garden on your sad little blog you poison it yourself, so much for organic bnp.

So you manufactured comments on UAF site welldone Goebells, I bet your family if you have one are reassured that your idols even murdered their own children in the end, if I was them I'd hope you do it to yourself sooner rather than later.
Scumbag!

So you organised another attack on woman now in hospital in Huddersfield well done, really brave aren't you getting kids & nutters to do your work for you. Why dont you come for a walk around radford or other working class areas yourself with your flag & let us know when?,
thought so,
coward & a bully incarnate, a true prospective leader for the Nazi-BNP.Even C18 must despise you, bet the Boss Cod eye Qausi modo & his Gimp boy Reynolds werent too happy with you either.
Hows the bunker on the farm going by the way?
Wonder what Griffin & Reynolds get up to with the sheep their practising for when the time comes heh?,organic farm? griffin buys alot of bombs I mean fertiliser,what does he use it for though?.
Anyone who sends children there for that sick conference at the end of june better wonder what they do to kids who "misbehave".

The British judiciary should be ashamed of themselves, there is still time to send these crimanally insane sickos down, some of the police have tried despite infiltration. It shouldnt be upto good concerned citizens to do the job, though as the saying goes,
WE WILL NEVER SURRENDER!

what about the rights of anti-fascists?

What about our own rights? I feel threatened by the existence of a fascist political party and if I know they are able to promote racism and hatred I feel even more threatened.
All you liberals have to realize that possibly the most undemocratic thing is the very existence of neo-fascism, therefore BNP and the like, should be attacked in all possible fronts until there is fascism no more.
This is not a matter of freedom of speech. Nazis are not presenting rational arguementation, so you cannot defeat them in a rational debate. This people are complete idiots and should not be allowed to orginize in any way.

I do not see how to defend the promotion of racism, hatred and fascism basically, is somehow more free than the freedom of anti-fascists who are struggling against the promotion of these anti-human ideology.

Anti-Fascists have rights too


The BNP as a whole is not fascist, it encapsulates thousands of different people with a wide range of ideologies.

Trying to stop them organizing is utter totalitarianism. Anyone who believes their most vicious opponents cannot use the same methods they themselves employ is not only an idiot, but dangerous to other organizers.

Several important facts have been left out off the "Free Speech" arguments above.

The BNP do not support free speech. They do not believe in Free Speech and equal rights for immgrants, gay people or people that are not white.

Not only do they not support free speech for these people, they actively attack them. As some one who has grown up in a multicultural area, I can tell you that while they may not make the headlines, BNP attacks on innocent people are frequent.

I believe in Free Speech and so do many of the organisers of the Stop the BNP. However, When that Free Speech is used to incite racial hatred, violence, attacks on innocent civillians we have to Stand Up.

Not a BNP member

Wellsaid nota BNPmember,sod being nice2BNPnazi quisling timewasters,BNPare just a sad protest vote, their hardcore carry out spineless terrorist activity like the gestapo or KGB they hide behind civilians, good people& ideals to attack innocent men, women & children. Utter disgrace & sham, most are too physcopathic,dumb or slovenly to make it anywhere else so they join the BNP, master race??
When not working lying for BNP they are the worst kind of debt collectors & lazy moaners. Their sad leaders need shutting &locking up off for their own & their childrens sake

I'm sick of hearing all this high-minded crap about fascists' fucking rights from a bunch of liberals. Get this into your heads there is ONE WAY to stop fascists and thats militant direct action. The threat of this has already caused the police to deny them a licience, no big deal; we need to kick them off the streets, beat them back into hiding. There's no instance in history of succesful anti-fascist action which wasn't based around wiping them off the map and preventing them from organising, end of.

Simon Darby's Troll Army have made a noted decision to divide and conquer the British anti-racist scene by trolling Indymedia.

Sometimes Mr Darby's trolls pretend to be liberals, and other times, rebel anarchists.

They sometimes claim to be anti-racists, and other times, non-political commentators.

Remember this: - Hitler was unopposed, and went on to mass murder. So much for allowing free speech.

It's chilling and its true so ALWAYS read between the lines, and don't always take Indymedia posters at face value.

Many times, it's lies and bullshit!

The Red, White and Blue festival is being held on private land. It is a ticket event. By all means demonstrate against it. Organise your own counter Festival if you like. If you use violence or intimidation, however, you will lose the moral high ground. Liberals such as myself will condemn you and call for you to be punished under law. People in this country like living in a democracy. That is why extremists of all stripes will fail.