Nick Griffin, leader of the BNP, was scheduled to speak at Kimberley Parish Hall on Tuesday 16th Oct. The hall was surrounded by anti-fascists from well before the event was scheduled to take place. The anti-fascists massively outnumbered the police as well as the BNP and their supporters. Anti-fascists were responding to a callout from Nottinghamshire Stop the BNP for a mass demonstration against the planned meeting.

Police numbers were very low though and they did not really have the resources to make arrests. There were 3 arrests though, mainly around the chaos of a particular scuffle or other. All this resulted in was 2 cautions and 1 released uncharged. The evening ended with the anti-fascists agreeing to leave. It was only this gesture that allowed Nick Griffin to leave the building. No more than about 10 people managed to pass through the lines over a period of more than 2 hours.

Reports: tonight in Kimberley | Stopping the BNP in Kimberly

On Tuesday night around 100 anti-fascist protesters and local people managed to succesfully blockade a BNP meeting in Kimberly, which had hoped to see party leader Nick Griffin as the main speaker. Antifash wrote: "In a pincer move of dangerous guile and cunning we approached the parish hall where the fash were due to meet from two different directions. In a bit of an anti-climax there were only a handful of coppers and no obvious fascist presence. We quickly moved into a line to completely block the front of the hall, preventing any movement in and out. After a bit of pushing and shoving with the outnumbered police we had a line several people deep across the driveway to the hall. Down at the other end people blocked the pedestrian entrance to the hall. No wannabe fascists were going to get into this meeting."

Anti-fascists from many different walks of life and persuasions linked arms and made a show of force against the few skinheads and others who did try and push through. Scuffles ensued as the police first tried to break anti-fascist lines at the main gate, and then clear the smaller entrance. One antifascist suffered a minor injury as the main gates were pushed to and fro in the melee. There were three arrests near the smaller entrance. In all perhaps 10 BNP supporters were helped into the hall by police, before they gave up all attempts. Several times that number of fascists stood at a distance in the rain, helpless and dumb.

Nick Griffin has a conviction for inciting racial hatred, and has been known as a Holocaust denier. His party has been targeting the Western and Northern parts of Nottinghamshire for years, not daring to approach the more diverse and wised-up urban centre. Nottinghamshire Stop the BNP organised the counter rally to show that the BNP's race hate politics are not welcome in Kimberley or Eastwood.

Defend jobs, defend our communities, our health service, our housing and the education rights of our kids. Yes! But also defend them from the race hate of the BNP that only leads to violence and division. '

"It is more important to control the streets of a city than its council chambers." Nick Griffin, 1997

Well, you're not having our streets, you Nazi scumbag!

Once the BNP supporters had given up and gone, the anti-fascists held the cordon until they chose to withdraw, but not without insisting that Nick Griffin be made to leave the town centre first. Amid chants of "scum" Griffin was hastily driven away into the night on the back streets towards Watnall.

Nottinghamshire Stop the BNP is a broad coalition of Trade Unionists, local people, community activists and others, that has flourished over the last six months in response to the BNP's renewed attempts to gain a foothold in the area. In the May council elections BNP regional organiser Sadie Graham was elected in Brinsley, with two independents and Labour failing to unite the anti-fascist vote. In Kimberley the BNP barely managed 10% at the polls, despite heavy campaigning. In Nottinghamshire the BNP have had little luck so far on the streets or in the council chambers.

Notts Stop the BNP say that further actions are planned in the run up to a bye-election in Sutton West on 1st November, where they have already had a prescence on the streets. 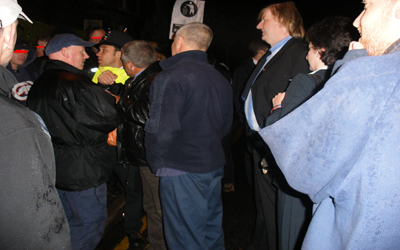 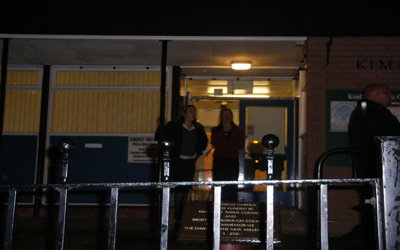 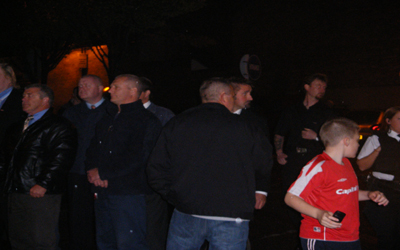 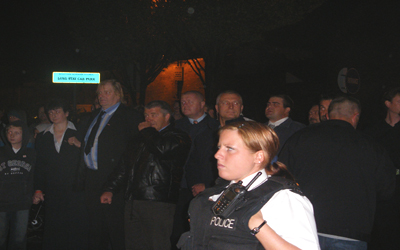 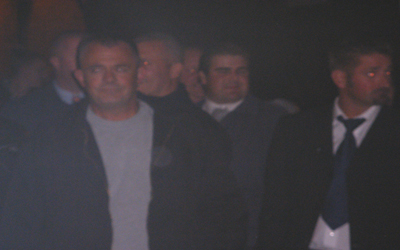 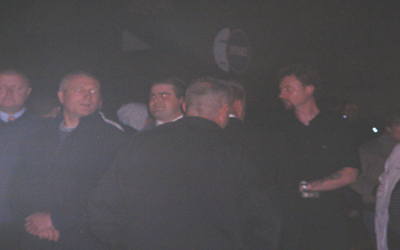 Tuesday night 16th October saw a combined force of approximately 100 people opposed to the BNP arriving at the village of Kimberley in North Nottinghamshire.
The group consisted of trade unionists, local councillors, people who had never been on any demo before, members of Stop the BNP and Antifa activists.

Initially unsure about the precise location of the meeting, Antifa scouts who had been out from three o’clock that afternoon, confirmed a definite meeting place following reconnaissance of the local area on foot.

A decision had already been made to deny the BNP entry, either by locking them in or out of the meeting, or by using weight of numbers and physical opposition. A team moved in to secure the main gates and lock ‘em off. It wasn’t needed as the group effectively made the main gates a no-go area by standing strong.

This worked like a dream. Other than BNP security, including their head of security, (sic), Martin Reynolds, there were perhaps a maximum of 20 people in the meeting. A mob of approximately 30 BNP party faithful, (suited, booted and clearly a reinvented former street-fighting wing of the BNP), collected on the road across from the assembled anti-BNP crowd, more people joined them outside in the rain. It was great.

They asked the cops to let ‘em in. They tried. They failed. A few elderly BNP did get in however, but the furore created when this happened seemed to finally convince the police that it really wasn’t worth the argy-bargy to let this happen and were heard to be arguing with each other until the decision was taken to stop allowing anyone through to the meeting.

Some of the BNP then tried to leave via someone’s front garden next to the parish hall. Unable to do so, they were repelled and had to turn tail and return to the hall. The police tried on several occasions throughout the next three and a half hours to get either BNP who wanted to gain entry to the meeting in, or those who wanted to get out of it out, to no avail.

Some locals demonstrated verbally how much work the BNP had put into the area by shouting anti-immigration slogans, that was until the cops arrested one of them…..
Policing was heavy handed & some individual officers were seemingly taking the whole thing rather personally….maybe their allegiances were a bit challenged eh? More people in cars were turned away from the junction at the end of the road, as the police blocked the junction preventing all but more cops arriving.

Eventually the police placed themselves in the position of asking if we would allow Griffin to leave. Result! The combined steward group then made the decision, to allow this to happen and almost four hours later, in the driving rain which had fallen continuously all evening, one of the few dry attendees of his own meeting, Nick Griffin, left Nottingham with a few things to think about.

To call it a result doesn’t cover it…. It’s taken a long time, but all the hard work & planning paid off.