In the early hours of February 26th, Nottinghamshire County Council voted to endorse a controversial budget which will see jobs cut, care homes sold off to the private sector and the cost of services for the elderly and disabled increased. Campaigners opposed to the plans rallied in Mansfield and outside County Hall to show their anger at the proposals and council workers are currently being balloted for industrial action (but not a strike) against a related attack on terms and conditions.

The county council's programme of cuts comes in a political climate in which all the main political parties have expressed their belief in the need for cuts to public sectors in light of the economic damage wrought by the banking collapse and subsequent bailout. The Labour-run city council are also planning to cut staff as well as closing Victoria Baths along with libraries in Wilford and Beechdale. 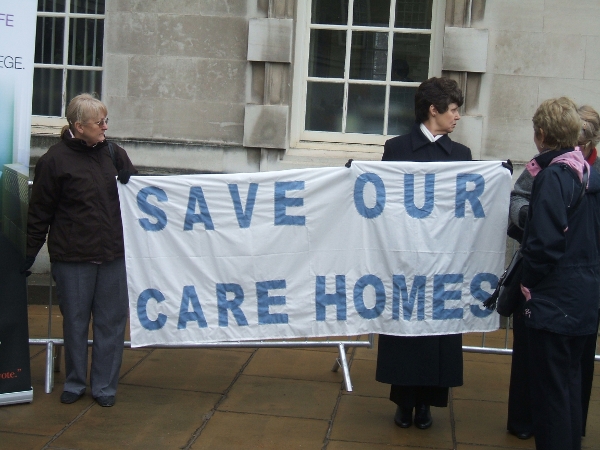 Campaigners are angry at the policy of cuts which is being produced by the new Tory administration which came into power in the elections last June. Cuts of £33m were announced in November last year. Among the proposals were the end of funding for Dial-a-ride and community transport regarded as essential by many disabled people and the elderly for whom these services are a vital safeguard of their independence. Council bosses also wanted to privatise all the council's care homes and increase the cost of day care services. Inevitably, there were also to be job cuts, with suggestions that as many as 1,400 jobs could be lost over three years.

In January, just before the end of the consultation, the council announced a set of modified proposals. Community transport was given a stay of execution and some of the steeper increases were reduced. Following the controversy which followed January's heavy snow, the council also decided to reverse its plans to cut the money spent on gritting roads. Unison were keen to present this as a victory, based on the suggestions they had made to the authority in an article in the Evening Post. Nevertheless, the council still proposed cutting £28.7m.

Inevitably, with a General Election around the corner, this has become a party political issue with Labour MPs jumping on the Tory-bashing bandwagon. The unions meanwhile appear to be unsure how to act. Despite a protest against an associated attack on terms and conditions in November and a high-profile media campaign they have only just decided to ballot their members on industrial action and are keen to emphasise that they are not considering strike action.