Radford community on the march

Saturday 20th March saw over 100 members of the Radford community march from the threatened Radford Unity Complex to Market Square. They were protesting City Council plans to close the building which is currently home to a number of community groups.

The Council says it is saving £140,000 per year by closing the building and says it has a buyer. They have offered the affected groups premises at the closed Douglas Road Primary School. However, Joginder Singh of the Sikh Community and Youth Service said that the new premises are "many times worse" than those they have at the moment and that the groups have been "treated like parasites" by Jon Collins and the City Council.

The groups are angry that they were not consulted about the plans before being served with an eviction notice and that they are not being given an opportunity to buy the building themselves. They are considering taking legal action against the council over the way they have been treated. 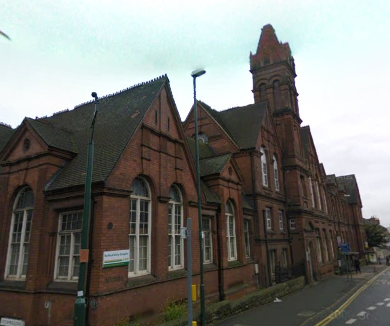 Groups currently using the RUC include the Sikh Community and Youth Service (SCYS), the Nottingham Teaching College (NCT) which offers courses to around 1,000 local people per year and Catch 22, a group working with young people and offenders, Shiefton Youth Group and Supplementary School, the Hindu Youth Group, the Gujarat Samaj Youth Group and Erondu after school study and support group. SCYS has been using the building since 1988. Unsurprisingly, those who have worked hard for so long within the building are angry at the decision. The NEP reports that Joginda Singh of NCT and representatives of other groups put in a bid to buy the building but the Council weren't interested. "We have invested so much money in it," he said, "When we came it was almost derelict. We have repaired it, put in new windows, painted it."

According to reports, the Council has found a buyer for the property, but is refusing to disclose the buyer's identity.

The Council, which made the decision to close RUC via its Executive Portfolio Holder, council leader Jon Collins, says closing the building will save them £140,000 a year. Collins, is reported as saying "The city council has been talking to the organisations about the closure of Radford Unity Complex since September and we have found alternative accommodation and offered financial support in the immediate future to help them through their move." However, Balvinder Kaur of SCYS has said that the group has had no contact from the Council's senior managers or councillors. It is unclear what support the groups have been given to find new premises.

The NCCLOLs blog has done some research into how the decision was made and found that that the community groups had been given notice to quit before the decision to close RUC had even been made. In adition, the decision of the Executive Portfolio Holder was subject to a 'call-in' where the Overview and Scrutiny Committee set up a sub-committee to review the decision and ask the Executive to look at the issue again. This is the first call-in at NCC in 10 years.

The groups affected have received legal advice that they are entitled to 6 months notice to move out of the building. In addition they do not believe that have received an official notice to quit the premises. Jon Collins has said that the Council "hope any problems can be resolved without legal action."

The march began at 10.30 at the RUC on Radford Boulevard. It was a very diverse crowd of people, many associated with the Afro-Carribean and Asian community groups that currently use the building as a base. We marched up Ilkeston Road towards town in good spirits accompanied by a tireless group of drummers and whistling. There were lots of banners and placards bearing slogans such as "No Consultation. Poor Communication", "Bureaucracy NO, Community YES", "Unity is divinity" and "There's no such thing as a free lunch. There's no such thing as free rent. We are paying our way" (which was, perhaps, in response to reactionary comments in the Evening Post, claiming that the community groups were scrounging from local government handouts). We had a warm reception from many local people waving from the doorways of shops and windows as we went up the hill.

The police took us on a winding backstreet route from Canning Circus to town but we still got to march along a short stretch of Parliament Street before we were stopped at the Speakers' Corner. Was this done by the police to prevent us joining up with the eighty or so Sneinton community campaigners protesting against the closure of the Victoria baths? It's hard to say but it would have been good to join forces in a common cause.

We heard a brief speech from a member of one of the affected community groups before Rowena Holland, the Conservative prospective parliamentary candidate for the Nottingham South constituency took the platform. Bizarrely there was a few minutes of waiting whilst she posed for photographers before she spoke. When announcing herself as the Tory candidate she received an audible hiss from some sections of the crowd. A banner raised behind Dr Holland said "I've never voted Tory before... but things might change." The Tory candidate's championing of this campaign seems rather cynical, in the run up to election, and in my mind is just an anti-Labour stunt. Certainly her fellow Tories across the river at County Hall have been slashing community provision with abandon so why we are to believe that Dr Holland will be any different is beyond me.

Unfortunately no one else spoke. I'm sure many of us would have liked to hear more from the community groups who have been treated in such a disgraceful way by the Council. I interviewed a few of those involved, including Joginder Singh of the Sikh Community and Youth Service (SCYS) and Nottingham Teaching College and a representative of the Hindu Youth Group. You can hear most of the speeches and the full interviews in the sound file (apologies for the poor quality in some places!)

Mr Singh said that the groups "have been treated as though we were parasites". When speaking about their imminent eviction he said "We found out purely by accident - they didn't even tell us". "The way they have treated us, it's as though we don't matter" he continued, "It seems to me that Jon Collins has more power than the Prime Minister".

Apparently, on Thursday the groups were offered the now vacant site of the Douglas Road Primary School to relocate to but according to Mr Singh this "is many times worse than what we've already got". He concluded "We've helped thousands and thousands of people for nothing - we're all volunteers. It's not fair."

When speaking about why his community was marching, the representative of the Hindu Youth Group said "We need to raise our voice to get justice done". He was also critical of Jon Collins saying that "he wasn't very positive in his work. He didn't show any concern about the issue."

After the speeches were over the group moved on to rally on the steps of the Council House.

People in Radford are very angry about the disrespectful and inconsiderate way their community centre is being treated. Jon Collins and the Labour-run City Council cannot just evict groups that are important to the community to balance the books - these centres are too important. Let's hope that the groups win their fight to stay.