Another week of the election, another week of scapegoating migrants equals another week in which the deportation machine strides on; imprisoning men, women and children before deporting them to wherever is most expedient. The mainstream political parties' rhetoric surrounding immigration has become less and less distinguishable from that of the BNP. They point their fingers at migrants, positioning one group of oppressed and marginalised people as the cause of the dispossession of other groups.

This anti-migrant discourse is further developed by the mainstream press - including the Nottingham Evening Post - who seek to flog their rags with sensational headlines which blame migrants for all of society’s ills, unwilling or unable to develop a broader analysis.

Meanwhile, resistance continues in the form of migrant protests within the detention estate and solidarity attacks on the companies profiting from running migrant prisons, such as Serco. 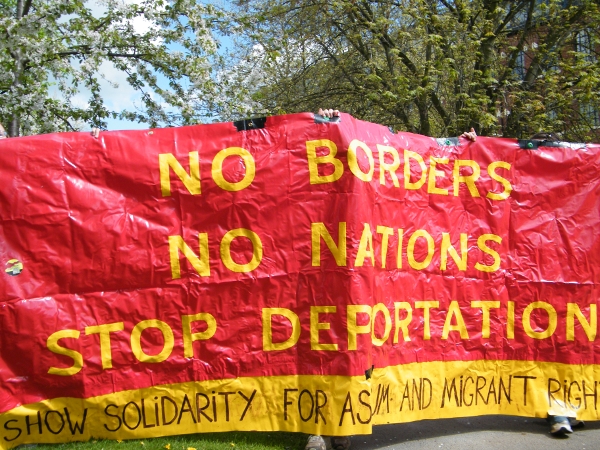 Private industry works in tandem with the state as it oppresses for profit and power - companies such as Sodexo, Serco and Global Solutions Limited reap the financial rewards of the border industry. The UK Border Agency continues to reinforce the borders with the latest in surveillance technology. In Calais, where some Nottingham activists continue to spend time, more money is being poured into the creation of suffering for those wish to come to the UK. Controlling borders has always been about the control of capital, now though the border control is an industry in its self. New contracts and new technologies are being created, further embedding European governments migration policies with the interests of multi-national corporations.

This year has seen women in the Serco ran Yarlswood detention centre on hunger strike and prisoner resistance in the GSL ran Oakington detention centre, these occurrences emphasize the continued struggle which goes on daily against systematic oppression at the hands of the state. In parallel with this over the course of April three separate attacks were carried out on the offices and vehicles of Serco, with their property being burned in Bristol, Nottingham and London.

On the 8th of May the Nottingham Student Peace Movement put on their annual conference and this year it will be focusing on the issues of migration, connecting them to other themes such as capitalism, climate change and the military industrial complex. It is the aim of the conference to challenge assumptions and develop critiques of current paradigms surrounding migration which permeate mainstream society, academia and activism. This event is of particular relevance due to the University of Nottingham's ties with Sodexo. In april the Lakeside Arts Centre which sits at the feet of the University and has contracted it's catering out to Sodexo the same company who have been given the contract to supply the goverment issued identity cards for asylum seekers, a contract worth millions for Sodexo whilst infringing on another aspect of asylum seekers liberties and freedoms. The millions of pounds they are making from this act of oppression is on top of the tens of millions they made in the eight years they ran Harmondsworth detention centre, which is the largest site of migrant oppression in the U.K, imprisoning 500 men, women and children at any one time. As well as enjoying the financial rewards for this aspect of their business, Sodexo also run the hospitality and catering at the National College, on the Jubilee campus of Nottingham University.

A month later from the 1st to the 6th of June a week of actions against the deportation machine has been called for by the Stop Deportation Network. During the week groups and campaigns from around Europe will organise autonomous actions against the deportation machine. Deportations of migrants are now co-ordinated efforts involving private industry and unaccountable government agencies such as Frontex and IOM. This is the just one highlighted week in the resistance against nation states and the border system and suffering which they cause. Other flash points this year will include the 15th of May, when there is a day of action for the Freedom of Movement for all, and the 23rd and 24th of May will see demonstrations against Frontex exhibitions. These will be followed by weeks and days of action across Europe, until September when in there will be a No Borders camp in Brussels which will bring together the struggles against nationalism, surveillance, detention, deportation, and the privatisation of the borders.

As a Nottingham Post writer who has sought out the stories of refugees and asylum seekers, I do not accept that we are guilty of "flogging our rag" on the back of sensationalist journalism aimed at those groups. If you believe otherwise, it might be helpful to include an example or two the next time you wish to make such an assertion.
Or even better, if you believe there are stories from these underreported communities that you believe we should be covering, get in touch.

In these cases, the fact that the accused was an asylum seeker had nothing to do with the story... but of course, it's sensational so helped to sell papers.

Then there's the active collusion of the Post with the immigration services to harass migrants:

The paper is also constantly putting out these services' press releases without any critical comment:

And let's not even get started on the deluge of racist and anti-migrant comments that the paper is happy to give a platform to on its site.

Erik, if you are genuinely concerned about migrants I suggest you speak to your editors about why they are allowing this war on migrants to be waged from the pages of the paper.

Send me stories, then

First of all, thanks for responding. And let me begin by noting where I think you have a point. In the story on the police unit, it would have been good for us to provide a fuller picture by including comment from people who work with and advocate for immigrants.
However I think it's important to draw a distinction between deadline journalism and some sort of organised campaign of hate. I also disagree with your categorisation of our other stories. For example, in the case of Le Phuong, I struggle to see how his being an asylum seeker was irrelevant to the story. It was central to the manner in which he was exploited. That story mentioned both the prosecution's case against him and the defence's case as to how he was exploited.
In terms of collusion between the police and the paper, I'm sorry but one five-year-old story doesn't really prove that to me. As it happens, I also know the journalist who wrote that piece. He's no longer with the Post but if you get a moment, I'd suggest calling local immigrant community leaders. His body of work is bigger than that one piece.
Moreover though, it looks to me as if you are cherry-picking stories where, say, immigrants have appeared in court, to illustrate that the newspaper has some hidden agenda. I think that paints a distorted picture of what we do.
In recent months, I personally have covered stories such as the ongoing battle for Selina Adda and her family to stay in the UK, and Nottingham becoming a City of Sanctuary, just to name two. A paper with some anti-immigrant agenda wouldn't have even let me out of the gate with those. Right now, I'm working on a series of stories for Refugee Week. If you have something you think I should be writing about for that, I'd love to hear it.
In fact, this is what I find most frustrating. I've read on Indymedia before about how "the Post won't deal with us" or "the Post isn't interested". Well, I write for the Post and I'm interested. E-mail me. I want to hear from you. I can't make any promises about coverage, but I'll listen to what you have to say.

"However I think it's important to draw a distinction between deadline journalism and some sort of organised campaign of hate."

I don't think anyone said anything about an organised campaign of hate. I think "anti-migrant discourse" was the original quote. You admit that, through negligence, your paper has helped to propagate that discourse.

"As it happens, I also know the journalist who wrote that piece. He's no longer with the Post but if you get a moment, I'd suggest calling local immigrant community leaders. His body of work is bigger than that one piece."

I have also met him. I agree that he tried to make amends but we have to ask what kind of paper would agree to that stunt in the first place? What kind of paper and with what kind of values. He also mentioned the lack of ethnic minority staff working for the paper and how that helped to foster a culture of ignorance about others. Would you care to comment on whether this culture is still present at the Post?

"Moreover though, it looks to me as if you are cherry-picking stories where, say, immigrants have appeared in court, to illustrate that the newspaper has some hidden agenda."

I don't think the paper has a hidden agenda. I think the editors are lazy and ignorant and publish what they think will please their bosses and sell papers. This sometimes comes at the price of those already demonised in politics and the media - migrants.

I notice that you make no comment on the Post's hosting of racist and anti-immigrant comments on articles. Do you condone this?

I am very happy to hear about the positive stories that you are writing. Please don't think that this is about you - it is about the unconscious propagation of reactionary values by establishment and corporate media.

I'm not sure where you've read those comments because I don't think that many Indymedia contributors want to get in the Post. We have this platform where we can publish our own news, any time, without it being edited or distorted by journalistic intervention. It's kind of you to offer to write for us but we already have a platform for our stories.