18 months after the 2011 Census, court cases are dragging on against a tiny proportion of those who resisted the Census on anti-war and privacy grounds, mainly but not entirely because of Census data processing contracts with Lockheed Martin (England and Wales) and CACI (Scotland). For background and other reports on this, see the Indymedia census topic, Count Me Out and Ethical Census. 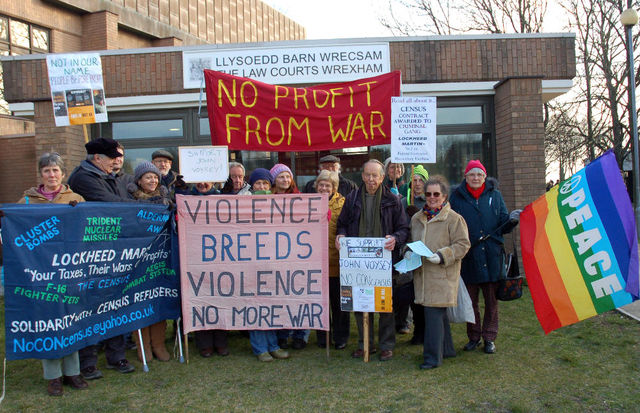 Andy Manifold's trial will take place at Liverpool Magistrates Court in the morning of Monday 8 October.

Sarah Ledsom's trial will take place at Liverpool Magistrates Court in the afternoon of Monday 8 October.

Deborah Glass Woodin of Oxford appealed against her conviction and the appeal will be heard at Crown Court on 7 December.

Barbara Dowling's case in Glasgow has now been adjourned until 19 February 2013.

Steve Grieve's trial will take place at Maidstone, Kent on 20 February 2013, having supposedly been postponed from "26th December"! The case was actually adjourned back in May.

The case against Jane Howarth (Devon) was dismissed at Exeter Magistrates Court in August.

Derek Sheilds' appeal against conviction was rejected at Liverpool Crown Court in June.

WHAT'S IT ALL FOR?

All these people and others have been or are being dragged through the courts for their principles, for refusing to be bullied or threatened into unwilling compliance.

Prosecutions seem to have been targeted at known activists along with others who were at home and answered their door when the Census Officers turned up and explained exactly why they weren't completing the Census. Inevitably, this resulted in a disproportionate number of elderly, sick and disabled people and those with young children (ie those who spend most time at home) being prosecuted. The longer these cases go on, the more it looks like political persecution, because of the obvious futility of pursuing Census refusers, the waste of public money taking these victimless alleged crimes through the courts and the tiny proportion who have been singled out for prosecution in the first place, even though in England this was far higher than in previous census years. See this comment from SACC on the tiny number of prosecutions in Scotland.

What's more, some cases have been dropped without explanation by the CPS while it seems determined to proceed with others to the bitter end, never mind the costs, both financial and to the CPS' already battered reputation. Legal aid decisions have given some defendants access to solicitors and barristers, but not others. Sarah Ledsom, for instance, has repeatedly been refused legal aid on the interests of justice test, while others in almost identical circumstances have been awarded legal aid.

The case against then Mayor of Stroud, John Marjoram, was dropped after his barrister submitted the arguments that would be used to challenge the prosecution. John Voysey's case, with similar arguments, was also dropped after representations made by his barrister following the dropping of John Marjoram's case. The case against Judith Sambrook was dropped by the CPS, apparently on grounds of Judith's health, revived by Judith and dismissed by the court after the Crown offered no evidence against her.