Mass blockade at Menwith Hill US base, Friday March 19th

On Friday March 19th Yorkshire CND held a mass non-violent blockade at the key US military base Menwith Hill, near Harrogate, Yorkshire, UK. They blocked 3 gates completely causing tailbacks for hours and massively disturbing the shift change-over. Menwith Hill felt compelled to issue a statement which is amazing since they never, ever speak to anyone.

"BLOCK THE BASE" started in freezing driving rain by 5am in the morning with protesters who had stayed in Leeds overnight blockading the base. Many protesters were met by police waiting for them. Yet they managed to block all four gates, many locking into place. Throughout the morning the protest was joined by more people.

The shift change, between 5.30 and 7.30, was a traffic jam. Police had moved pretty fast to try and clear two gates. Reports were they were pretty brutal with dangerous use of cutting equipment. Yorkshire CND said that despite liason some of the police behaved disgracefully and there were definite cases of extreme excessive force and violence. They want as much information and pictures as possible from anyone that was there to collect evidence. [more in article]. By 7am most of the protesters at gate one had been removed and were waiting wet and cold to be arrested. In all 30 people were arrested. Others gates were still blocked. Protesters were still arriving and demonstrating all around the base. 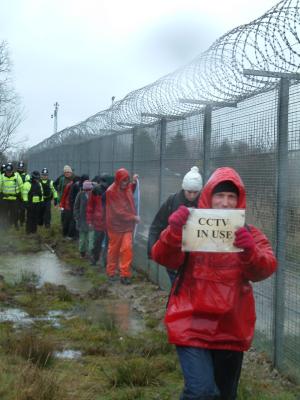 The event was part of an international weekend of action to mark the first anniversary of the attack on Iraq and also aims to highlight the base's key role in so many aspects of current US foreign policy.

The base is the largest military spy base in the world, run by the US National security Agency. It's also a key US war-fighting base (winning an award for its role in the Gulf War) and a major Star Wars base. It is one of the US's most strategically important military bases.

Many protestors stayed in free accomodation in Leeds the night before where there was a non-violence training workshop. The more festive preparations for the day music, speeches were well dampened by the appauling weather.

9:15am: Correction. It was in fact Lindis Peircy who was arrested for walking across a road. Not Annie.
9:15am: Annie from CAAB arrested in her wheelchair for obstructing a PC.
9:00am: Police keeping the arrested cold and wet, they are not processing people.
8:00am: Just gate 3 open, all others blocked. People still locked on at gate 4
7:52am: 2 gates still blocked . Police have been particularly nasty.
7:30am: The mighty veggies catering turn up with hot tea and coffee. Fair trade and organic. Much needed. it’s so cold that people really are on the verge of hypothermia after being in the driving rain and sleet since 5am, lying on the wet ground.
7:30am: The weather is horrible, a number of people were locked on at the main gate they have been removed and arrested, there are about 50-60 people there, more are arriving.
7:30am: People start to disperse from gate 1 but the road is still blocked. Cars of base staff are queuing up on the roads around the base. Total traffic chaos, jams all around. success.
7:00am: Gate 1: Everyone who had locked on have now been taken to various police stations.
6:30am: Gate 4: 15 people locked on to each other. Gate blocked.
6:00am: Gate 1: Police have managed to uncut the protesters and start to arrest people. The police have been extremely brutal. Using cutting equipment very dangerously. Holding people down by their necks and using pressure points. There has just been a completely unnecessary level of brutality.
A huge US flag was raised on the base just as the police moved in. There were many shouts to the police of: who are you working for? Exactly which country are you serving?
5:30am: At gate 2: two people have been arrested for having a PA system in their van, despite having permission to have it there. They are arrested for intent to cause criminal damage. How do you cause criminal damage with a public address system? The P.A. is confiscated as is the van.
Other people lock on to each other at gate 2 but are quickly uncut and arrested.
5:00am: Blockade starts. There is a shift change of people working at the base between 5.30 and 7.30. There are four gates. At the main gate there are about 17 people split into three groups who have locked themselves together. Holding hands through lengths of plastic piping. The three groups are lying on the very wet ground blocking the gate. There are also about 30 other protesters at this gate and about 70 protesters at the other gates. There’s about 50 cops in 6 vans.
4:00am: Leave Leeds for Menwith Hill. The weather is grim. Driving rain, howling winds even some sleet. Extremely cold.
3:00am: People wake up, final preparations
11:00pm: 150 people discussing tactics and preparing lock on's at the convergence centre.

There is a Block the Base site. The event was organised by Yorkshire CND and had the official backing of CND, Trident Ploughshares and CAAB.