A Week Of Protests Against DSEi Arms Fair Has Started

The much criticised bi-annual DSEi (Europe's largest arms fair) runs from 13-16th September in London, sparkling protests in and around the East End docklands. This year condemnation of the arms fair has also come from Newham Borough Council and the Mayor of Newham. Events against the arms fair include two counter conferences, press briefings, direct action trainings, a Reclaim the Streets Party, candlelit vigils, marches and blockades. A delegate's dinner protest and critical mass have also just been announced for Thursday 15th evening.

Is spite of police intimidation, harassment and relentless surveillance, actions and protests started ahead the opening of the fair. On Thursday 8th, anti arms trade campaigners paid a visit to the offices of DSEi organisers Reed Elsevier in Kidlington, Oxford, to raise awareness of the companies involvement in organising and promoting the arms fair. See [report and pictures] [video] Also see The Lancet Medical Journal Attacks its Owners Reed Elsevier | Corporate Watch on Reed Elsevier | CAAT on Reed Elsevier [Reed Leaflet + Action]

On Saturday the 10th, a Beat The Bombers - Pary for Peace took place in the streets of east London. Some of those who turned out were subjected to somewhat questionable but predictable police tactics against lawful protesters. See Timeline of Events and photos [1 | 2 | 3 | 4 | 5] [Videos 1 | 2]

On Sunday 11th, companies in the south-east of England involved in exhibiting at the arms fair were targetted with disruptive actions against their premises. On Monday 12th evening a Candelit Procession and Prayer Vigil took place outside Excel centre, while a noborder meeting was held in the convergence center. 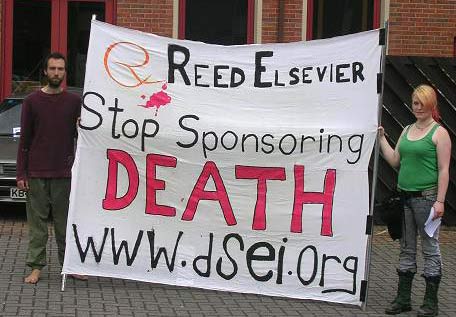 DSEi (pronounced "Dicey...") stands for Defence Systems and Equipment International. The arms fair takes place every two years in London's ExCel exhibition centre, and it is organised by a Richmond based company Spearhead Exhibitions Ltd.

At DSEi 2003 there were 973 exhibitors selling their deadly wares to delegates from a third of the world's countries. The protests included blockades of road and rail, a street party, infiltrating the arms fair and targetting the delegate's dinner. The policing bill for the protests was £4.5 million.

In 2001 there were 664 exhibitors, and delegates were invited from 68 different countries to buy guns, bombs, military planes, small arms, mines and tanks. It took place over 11th September 2001, the day of the attacks on New York and Washington in America. While many businesses around the world closed, the arms fair was not halted. For three more days, countries including America, Israel and 14 different Arab nations continued to shop, side-by-side, for weapons to attack each other with!